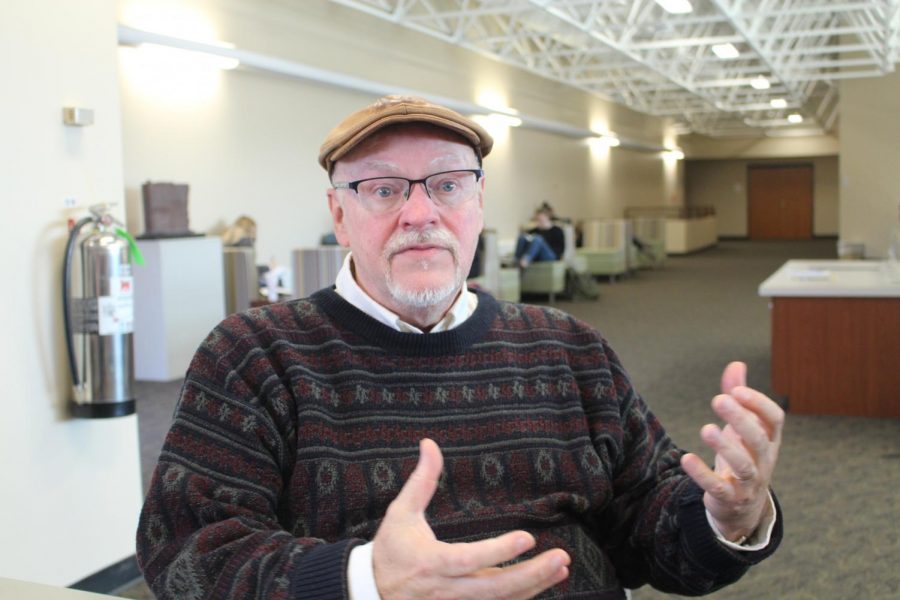 IUS Professor Frank Farmer reminisces about the inspiration and creation of his books and discusses his love of writing.

An inquisitive email and an open position in the English Department led recent retiree Frank Farmer back to IU Southeast, the place where he started his academic career fifty years prior.
Farmer, a Clarksville native, began attending IU Southeast in 1969. He said it was an easy decision to attend.
He also said he knew a few acquaintances that were attending, a facet that would help with his transition from high school to college.
“It was convenient,” Farmer said. “It was relatively inexpensive and a lot of people that I knew were going to go there as well. I had some friends who were already in place, so it helped me make that transition.”
After transferring to and graduating from IU Bloomington, Farmer worked as a librarian, a social worker and a musician. After not quite finding the right fit, he enrolled at the University of Louisville to pursue a Master of Arts degree in teaching English and continued his education at Louisville, earning his doctorate in the process.
Farmer found a job at East Carolina University after graduation and stayed there until 2000, when he took a senior position at the University of Kansas. He retired from Kansas in 2018, but found himself back teaching a year later, this time at IU Southeast.


Life as a Student
As a student at IU Southeast, Farmer was very active. He became the student body president, which, according to Farmer, was not originally his idea.
“I do not know if this is true of other people but I have a tendency to stumble into things,” he said. “I was here a year and I had received encouragement from friends that I should run for student body president.”
Farmer won the election and said he is very proud of what he accomplished that year, especially considering how tumultuous of a time it was.
“I was very proud of the things that I did during that year because it was different than previous student governments. It was very active, kind of activist-oriented. Those were very political times in 1969 and 1970 [with] Vietnam and all kinds of social upheavals.”
“We had a Kent State memorial. We sponsored the first Earth Day. We organized political rallies. It was a very exciting time, a very activist-orientated time.”
Transitioning to a Career in English
Farmer was an education major as an undergraduate and during his master’s studies, one of his professors recommend that he take a look at the University of Louisville’s PhD program, which is in a subspeciality of English called rhetoric composition.
“[Rhetoric Composition] is what my degree is in. Translated, that means I teach writing and a lot of it, but it also means I have a pretty good familiarity with the rhetorical tradition, at least in the West.”
After graduation, Farmer wanted to become a high school teacher by day and a novelist by night.
“In my 20s, I became a voracious reader of literary text,” Farmer said. “Of course, readers often entertain the idea that they can write stuff that other people want to read so I started entertaining the notion that I could write.”
“A lot of people who become teachers and who have an inclination toward english also entertain ideas about becoming writers, so I thought that I would teach high school and at night write the next great American novel. That did not happen, but that was the idea.”
Literary Works and Awards
Farmer has published three books in his academic career, having the most recent published in 2013.
“I had developed a passion and interest in a Russian philosopher of language in the early 20th century whose name was Mikhail Bakhtin. He was the foundation of my own dissertation work.”
“My first book was actually a collection of scholarly articles in my field on him, so it was an anthology. My second book were my own ideas of how to apply Bakhtin, especially to writing pedagogy, and it was called ‘Saying and Silence: Listening to Composition with Bakhtin.’”
“My last book was published in 2013 because I had developed an interest in publics theory, or theories of the public sphere, and especially counterpublics. That book was entitled ‘After the Public Turn: Composition and Counterpublics.’”
Farmer won several accolades for his work, but the one he is most proud of came from his students.
“When I became a faculty member at Kansas, part of my job was to mentor and teach graduate students in my field. I think the award that I am most proud of was given by the graduate students at the University of Kansas in English for my work with them as a teacher and mentor.”
“It meant a lot to me that I was helping other folks along their own path into academia.”
Temporary Retirement
Farmer retired from the University of Kansas in 2018, but he quickly found himself missing his students and the classroom.
“I was a bit lost, to tell you the truth. I missed the classroom. I missed students.”
Wanting to get back into teaching, Farmer sent some emails to local universities inquiring about open positions. He quickly received an email from Jacob Babb, who is the Writing Program Coordinator at IU Southeast. Babb said that he was thrilled to get the email.
“I had not known Frank personally until he started working here, but I have known about him professionally and have read his work for a long time,” Babb said. “It was really surprising to get an email from him saying that he had retired in the area and wanted to teach here because I had respected his work for a long time.”
Goals and Plans
Farmer said he has enjoyed his time with the students at IU Southeast and loves mentoring those in his classes.
“The thing that you look for in students anywhere and everywhere is a sort of natural inquisitiveness or natural curiosity about things, and my students have that.”
Though Farmer does not know how long he will be at IU Southeast, he is grateful for the opportunity to teach.
“I am grateful for this opportunity to come back to my first alma mater and to be able to teach young people what I know best and how to do it. It has been a wonderful experience and I hope it continues a little longer.”
Delete Image
Align Left
Align Center
Align Right
Align Left
Align Center
Delete Heading