Gaven and Rocio Lozada-Smith are 18, newly married and finishing their first semester at IU Southeast 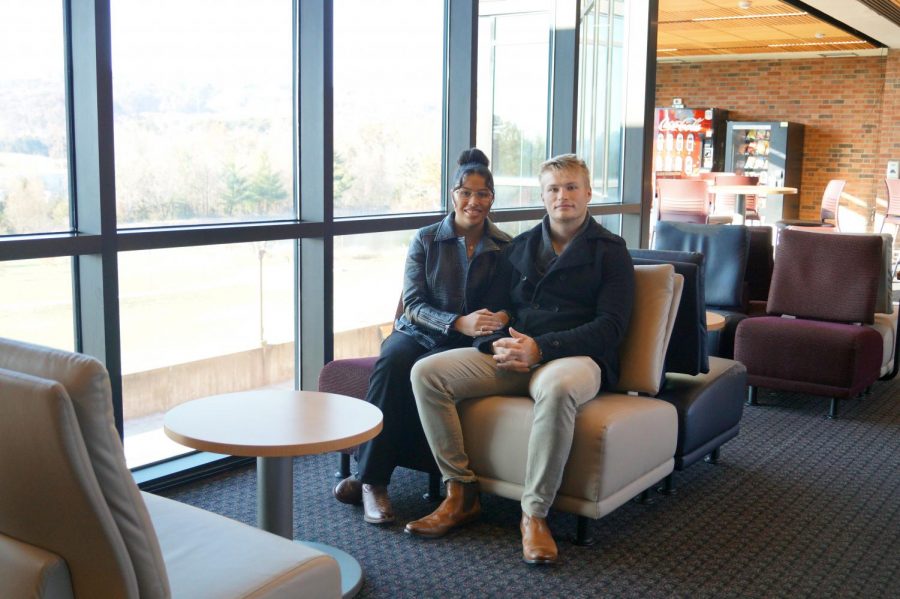 Gaven and Rocio Lozada-Smith have much in common, including the degrees they are pursuing. Both are business majors at IU Southeast.

Gaven and Rocio Lozada-Smith met by chance while Rocio was out shopping with her family. After that serendipitous encounter, she quickly got in contact with Gaven through a mutual friend. The Lozada-Smiths are now married and both pursuing degrees in the School of Business.
“We clicked quickly and mesh really well,” Gaven said. “Most people are surprised we’re married at 18.”
The couple met in May 2018 and began dating the following month. They married before the fall semester began, exchanging “I Do’s” in July 2019.
Business School and a Support System
Gaven is majoring in management with an entrepreneurship minor, and Rocio is a marketing major.
This semester, Gaven and Rocio do not have any classes together. In the spring, their schedules will be identical except for one class.
“It will be interesting,” Gaven said.
The Lozada-Smiths did not attend the same high school — Gaven is from a small town near Greenville, Indiana and Rocio grew up in Louisville after her family moved to the United States from Cuba when she was two.
“It will be good,” Rocio said. “Having him as a support system is really helpful.”


Finding Time Together
Despite attending the same school and both being in similar programs, the pair is not always together. They said, like many busy couples, they struggle to find quality time together. Gaven and Rocio have busy schedules including homework, studying and work.
Both have jobs they work regularly and they just got a new puppy. Between classes and work, they spend a lot of time taking care of their new puppy.
“He’s a German shepherd mixed with husky,” Rocio said. “His name is Hielo, it means ice in Spanish.”
When they do have free time, Gaven and Rocio enjoy being outdoors, hiking, shopping, listening to music and watching television together.
“We have a lot in common,” Rocio said. “As we have grown together, a lot of our views have started to become the same.”
School and work do not interfere or create conflicts between the couple, but they said it is the little things like who will do what chores. These conflicts are easily worked out by talking.
“That’s our main thing, is just talking everything out,” Gaven said.
Planning Their Future Together
Rocio said she wants to work for a marketing company when she graduates. She enjoys art and wanted to find a major that could incorporate her creativity.
Gaven wants to open his own business. He has thought about real estate but is not certain yet.
“I couldn’t see myself working nine-to-five every day, doing the exact same thing,” he said.
They both enjoy traveling. Gaven and Rocio liked Miami, Florida and San Antonio, Texas when they visited over the summer. They have thought about moving to one of these locations after graduation — they said they both want to move somewhere with warm weather.
Family, Traveling and Traditions
Rocio moved to Indiana five years ago, having previously lived in Louisville. She and her family moved from Cuba when she was two years old.
Her family travels often and has a tradition of traveling during spring break and over the summer. Rocio said one of her favorite places she has visited is the Dominican Republic.
Gaven is from a small town near Greenville, Indiana. Gaven’s immediate family lives in Indiana, while other relatives live in North Carolina, Arizona and Florida. Gaven has an older brother and sister and one younger sister.
He did not travel much before he met Rocio. They have been to Tennessee, Texas and Florida. They visited Cuba this past summer to meet some of Rocio’s family.
Rocio has a big family but only her immediate family lives in Indiana. Some live in Puerto Rico and others in Cuba. Her parents, older brother and younger brother live in Indiana.
Christmas comes with traditions and Rocio practices a few she would like to maintain with Gaven. Her family has dinner on Christmas Eve and opens presents at midnight.
“It’s technically Christmas Day,” Rocio said. Her older brother has children and if he does not come over on Christmas Eve, she said the family only opens one present.
“I can agree with [opening] one,” Gaven said.
Marrying at a Young Age
Gaven’s parents wanted him to wait to get married, but said they eventually came around to the idea.
“It took my family a little bit to get used to me getting married at a young age,” Gaven said.
Rocio’s parents were the opposite — they openly encouraged the couple.
“In Cuba, it is normal to get married at a younger age,” Rocio said.
Rocio’s bridesmaid and high school friend Deya Hernandez initially felt the couple was too young to get married.
“We talked about it and I said I was going to support her,” Hernandez said. “They’re really great people.”
Wedding Planning and Marriage
Gaven and Rocio originally planned for a simple wedding of signing papers at the courthouse, but three weeks before the date they changed their minds and wanted to have a wedding at Rocio’s parents’ home. Rocio described the sequence as hectic.
They put the wedding together quickly, buying flowers and a dress online and decorating the backyard the night before.
“I was nervous,” Rocio said. “I couldn’t see Gaven because of the bad luck. The day was great and turned out really good for planning it so quick.”
Professor Kauffman, Gaven’s business presentations professor, has taught for 32 years. He said he has not met many students who are married at 18, especially both attending the same university and pursuing a similar major.
“This is an age where people have their freedom and time. They don’t have any commitments,” Kauffman said. “[Gaven and Rocio] both decided, you know, this is more important, so that was interesting to me. They seem to be very supportive of one another.”
Gut Feeling
Rocio does not think meeting Gaven was coincidence. She said it felt right and if they did not get married, they would just feel ‘off.’
“I feel like if you want to do something but you’re not doing it because you are worried about what other people think, you should go with your gut, because your gut never steers you wrong,” Gaven said.
“And I think it has done us right,” said Rocio.
Delete Image
Align Left
Align Center
Align Right
Align Left
Align Center
Delete Heading