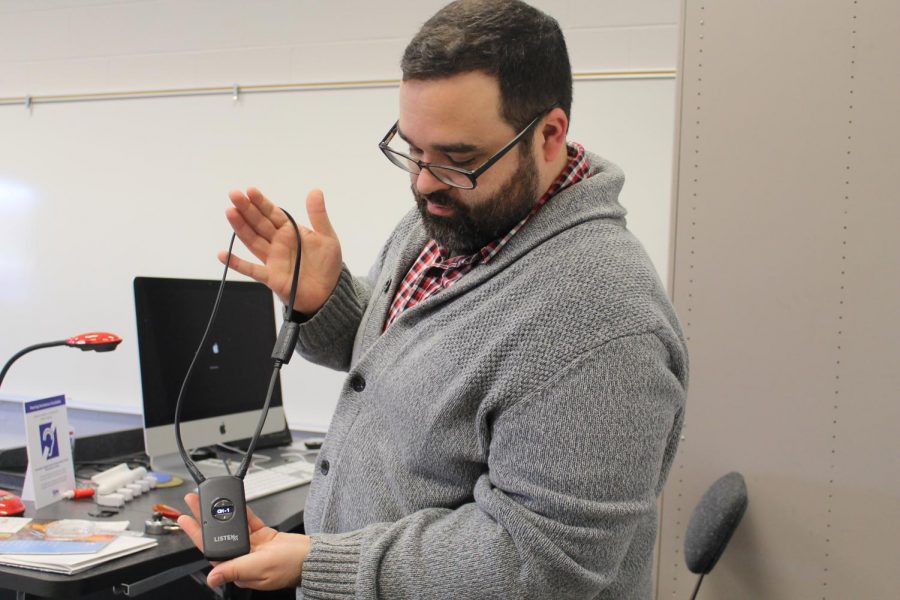 Danny Clements holds an assisted hearing device, which is one of the updated classroom technologies that has been implemented in the past few years thanks to the classroom budget.

While IUS students were relaxing over winter break, the IT department installed new laser projectors in multiple classrooms around campus.

The Sony VPL-PHZ10 laser projectors will help IU Southeast save money and time compared to the older Panasonic bulb projectors that had been in use before the renovations began around two years ago.

The new projectors may not look much different than the old Panasonic PT-FW530U bulb projectors, but internally they are worlds apart.

According to Danny Clements, the associate director of IT support systems at IU Southeast,  there were five reasons why his team decided to make the switch to laser projectors: decreased cost, technological updates, increased brightness output, less power consumption and faster start up and shut down times.

However, the installation of laser projectors has been going on longer than some may think.

“We’ve probably been rolling them out for about two years now,” Clements said. “It’s going to take a while for all of them to get out there because not all locations have a laser projector that meets its needs.”

Digital art classrooms need true color for their projections, so those classrooms do not yet have laser projectors.

Clements compared a key difference in the projectors by timing the start up and shut down times of both the old Panasonic bulb projector and the new Sony laser projector.

“The bulb projector has to shut down completely and go through a complete cycle of the cool down process. The longer you have it on the longer that process takes,” he said.

“If a professor accidentally turned the bulb projector off in the middle of class it would be 3 minutes before they could get back to their lesson.”

Money Saved
In addition to saving time and increasing productivity, the Sony laser projectors also save money for the university.

“Just from a cost standpoint it was a no-brainer for us,” Clements said. “The Sony laser projectors are $2,255 on contract and they last for 20,000 usage hours. The Panasonic bulb projectors that we have been using for well over a decade on campus are only $1,887 upfront, but then over their 6,000 hour life you have to replace the bulbs and filters and they actually end up costing $3,035.21.”

By comparing hour usage, for the same amount of hours the university gets out of the Sony projectors they would have to pay over $10,000 in Panasonic bulb projectors.

The money used to keep classrooms up-to-date comes from the classroom budget, which is given to Clements and his team by the IU Bloomington campus.

“Bloomington gives us a set amount of dollars per location,” Clements said. “They give us money to update classrooms every year and we use that money.”

“With the Sonys we do have to replace the whole thing if it breaks, but we do have a life-long warranty on all of the projectors,” Clements said. “If a projector goes bad, we always have a spare. The replacement process for the laser projectors is done in about twenty minutes.”

According to Clements, the replacement process for the Panasonic bulb projectors was a much more time-consuming and costly process.

The money saved from the projector switch will allow the Learning Spaces Committee — made up of the IT department, Facility Operations, the Institute for Learning and Teaching Excellence and faculty members — to accept more requests that are placed for items within the classroom.
Classroom Budgets and Replacement Cycles
Since so much relies on the budget, one of the most important aspects of installing laser projectors is the money that is saved.

“From the university standpoint, the most important thing is saving dollars,” Clements said. “We replace classrooms on a cycle and that cycle changes depending on the budget.”

With the cycle that Clements and his team uses, a classroom gets updated every 8-12 years.

“We are fairly certain that most classrooms will actually go two cycles before we will have to replace the projectors,” he said. “Since we get the set budget, that increases the money we can spend on other things in the classroom.”

Clements explained that the cycle used has already been set and is based on data from classroom usage, including the popularity of classrooms and how many students use a classroom.

As each classroom comes up on the cycle, they will get the laser projector unless there is a specific reason for it not to. Clements expects that out of 100 classrooms on campus, about 98 are going to get a laser projector.

“There were a lot of data factors that went into it,” he said. “We figured out where we were getting more bang for our buck.”

Basil Mumaw, the head IT technician for classroom audio and video at IU Southeast, shared how things have changed since he started 17 years ago.

“We’ve managed to greatly simplify what goes into an installation, but that’s just kind of been the march of technology,” he said. “Back when I started we had things that were similar, but they cost around 2 to 3 times as much. The price for some things have gone from around $8,000 to $2,300.”

Mumaw also shared how the IT department works with the faculty on fulfilling classroom requests.

“We try and communicate with faculty and see what can make their classroom better,” he said. “Unfortunately we can’t accommodate every idea. With some requests price can be an issue.”
Student Benefits and Opinions
One important aspect of the laser projectors that benefits students is the production of sharper images.

“There are a lot of classrooms out there that are deep,” Clements said. “No matter what projector you put in, the first few rows are always going to be fine. It’s when you get deeper into the classroom that you have trouble with clarity and being able to see it. The new projectors really help with that.”

“Replacing the old bulb projectors with new laser projectors is certainly a good idea, especially considering it’s paid for by the classroom fund from IU Bloomington,” he said. “They will make life as a student easier for me and many others.”

Hendrix also shared a personal frustration with the bulb projectors that still remain at IU Southeast.

“Speaking from experience, it’s frustrating to have to restart a twenty minute presentation because a bulb blows out in a projector,” he said. “Replacing them with something more reliable will improve the classroom for both teachers and students.”

Additionally, Hendrix stated where he would like the money saved from the switch to laser projectors to go in the classroom.

“I would like to see the money saved from switching the laser projectors invested into supplies for our classrooms such as new or additional staplers or desks for a standard classroom, or lab equipment such as new balance scales or hot plates for science classes,” he said.
Working Toward the Future
Clements wants both students and faculty to know that they can come to the IT department for issues with their projectors.

“I think a lot of people don’t know who takes care of the classrooms, so when there’s something they don’t like or if there’s something that’s not quite working for them they just wait and see if it gets fixed,” he said. “But if we know about it, we can plan for it.”

Clements also said introducing laser projectors is an initiative for him and his team to improve the future of IT.

“If we move to laser projectors now, in 7 years we’ll potentially be able to have your computer broadcast to several projectors instead of just one computer to one projector,” he said.

“There are a bunch of possibilities out there, we just have to lay the groundwork first.”