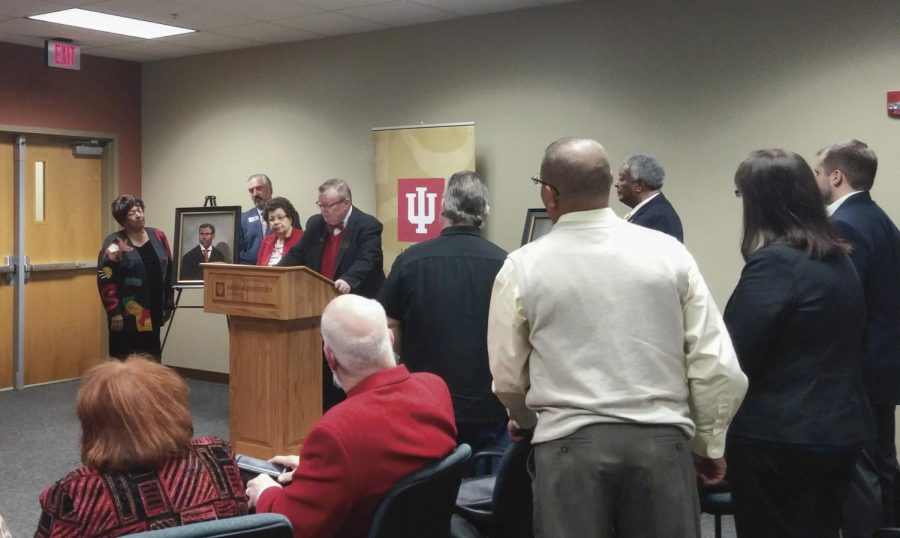 IU Southeast Chancellor Wallace speaks behind a lecturn during the Neal-Marshall Portrait Dedication.

The IUS Office of Alumni Engagement held a dedication ceremony on Thursday, Jan. 23 for portraits of Marcellus Neal and Frances Marshall, the first male and female African-Americans to graduate from Indiana University.

Following this, the eighth annual Voices of Change Speech Contest was held, where five IUS students gave impassioned speeches on ways to improve the world.
Neal-Marshall Portrait Dedication
Chancellor Ray Wallace began the portrait dedication by introducing the founding members of the Neal-Marshall Alumni Club, and gave a brief history of Marcellus Neal and Frances Marshall.

“At that time, it was rare for a black man, let alone a woman, to go to college,” Wallace said.

Oneita Phillips, founder of the Kentuckiana chapter of the National Minority AIDS Council, said she was proud of the legacy the group has achieved and expressed her desire to pass the torch onto the next generation.
Voices of Change Speech Contest
After the dedication, Professor Diane Reid hosted the Voices of Change speech contest. The students involved were tasked with writing about Martin Luther King Jr.’s vision and legacy.

Tera Sigafoos, whose speech was about the advantages of mandatory voting, presented first. She argued the lack of politically moderate voters has led to polarization in American society, and demonstrated how a system of mandatory voting could improve this.

“Why are there so few independents on the ballot? What about in office?” Sigafoos said.

Grace Kaine spoke about suicide prevention. She described how one of her friends attempted suicide in 2017, motivating her to seek solutions.

“By the time this speech is over, 7 to 12 people will have committed suicide,” Kaine said.

Noah Barnes presented third, on the topic of investing money. He argued it is best to start investing as soon as possible, even while short on money.

“The riskier the investment, the greater the profit,” he said.

The fourth speech, delivered by Kelly Sutton, described the positive effects playing an instrument can have on a person, particularly in regard to stress levels.

“We like to think ‘the busier the better,’ but our body is like, ‘No, please stop!’” she said, describing societal attitudes towards stress.

The final presentation, by Ysabel Fox, was about plastic pollution. She described the large amount of plastic that is used every year and stated that individual people can make a big difference, concluding by urging people to “throw convenience to the side.”

After the speeches were over, ACES Director Shane Thomas expressed his appreciation for the students and the messages they presented.

“You always hear that peoples’ number one fear is public speaking, but their topics are so important that they do it anyway,” he said.

Barnes was awarded first place, followed by Sutton in second, Fox in third, Kaine in fourth, and Sigafoos in fifth.