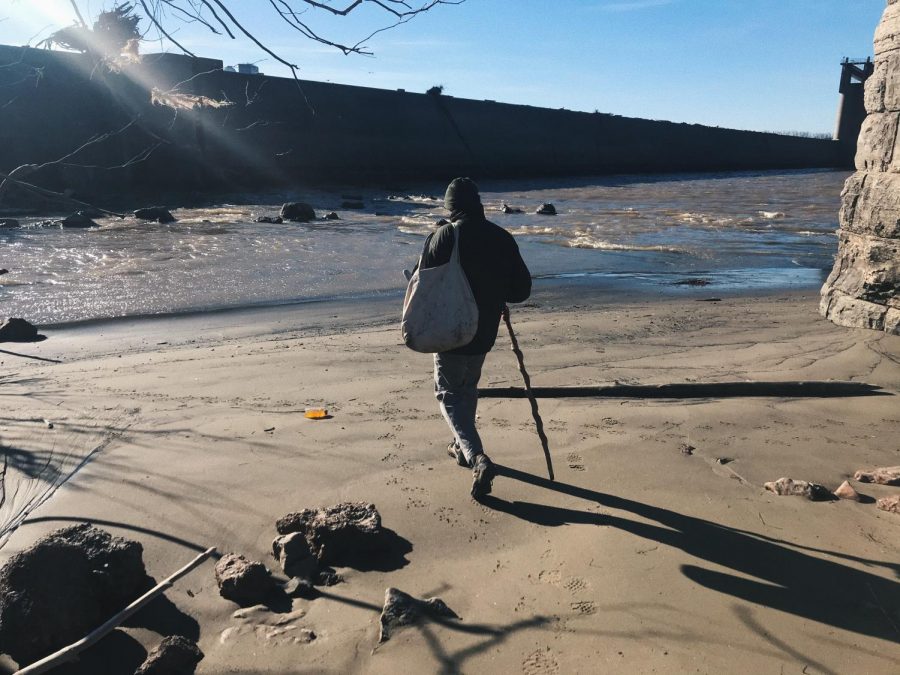 Al Gorman spots an orange sports drink on the beach at the Falls of the Ohio. He said the river learns to provide each river collector with exactly what they seek.

“We create so much waste and trash that ends up in the water – I do something with it,” Gorman said. “I wanted to raise awareness and have this big impact. I’m not that optimistic anymore.”

Gorman finds a walking stick and explores the Falls of the Ohio, collecting objects both humorous and reverent that have drifted downriver. One of his favorite finds: a message in a bottle containing six eternally-powerful words: “Mom and Dad, I miss you.”

After collecting, Gorman assembles the items around the Falls. Tennis balls may become the eyes of a giant head, a plastic tube an impromptu nose, and a fishing bobber a surprised mouth.

“I haven’t purchased art materials in twenty years. The river provides it, and supplies get easier to find every year… like an eerie plastic graveyard.”

Gorman began walking the banks of the Ohio River in 2003, and says his choice to permanently work with one site is what sets him apart from other found object artists.

“This is such an undervalued state park. I was born in Holland as a military child and have lived in many places, and this park rivals any,” he said. “Places gather a certain magic in them, over time, like the historic cities of Europe, and like here at the Falls.”

Gorman said he is fascinated by the meeting of manmade and nature, of human element and human creation. A recurring theme among his materials is what an object is versus what that object represents.

“Lighters represent fire, the most crucial of human discoveries. We just toss that to the side. I have found hundreds of lighters down here in 2019 alone.”

Another example is the flip-flop, perfect for creating spirals in sand or forming the mouth of an 8-feet tall Styrofoam sculpture. The flip-flop reminds him of the Laetoli footprints, a trail of human prints fossilized into volcanic ash dating back 3.6 million years.

“So much can be implied through the idea of a footprint,” Gorman says, holding a purple beaded sandal. “Every one of these have been individually imprinted by a human foot. Since it has been preserved in something artificial, it is essentially fossilized.”

Another common find: half-full bottles of sports and soft drinks.

“These [bottles] have had their labels removed, effectively ‘unbranding’ them. They’re now just forms of light… in every color of the rainbow. Somehow, they’re so much more than they were.”

Gorman arranges the bottles to create a surreal rainbow of light atop a log. While his passion for sustainability fuels his art, he views its impermanence as a message that we are not here forever.

“Each time I return, I expect that what I did last will be gone. Either the river will reclaim its goods, or vandals will feel the need to deconstruct. On occasion, someone will add their own creative touch. That’s the best, but ultimately, my studio is a public park.”

Dale Brown, Assistant Property Manager of the Falls of the Ohio Interpretive Center, has grown accustomed to seeing Gorman’s work around the park and the effect it has on visitors.

“He turns the trash into visual and emotional treasures. All good art creates emotion, and with it, controversy.”

Often called an art activist or an environmental artist, Gorman appreciates the irony of the controversy that his art creates. Feet hanging off the edge of a large log, he reflects on this.

“Some people feel that I should clean every bit up. I’m simply rearranging things. This problem is bigger than me. I could try, but the trash will still arrive. You’re either aware, or you’ve decided not to be aware. I’m just providing humanism.”

“The river sculpts… sharp edges of Styrofoam get shaped down resembling a fish, really. The river has a way of anthropomorphizing objects, as if they’ve had to learn how to swim.” 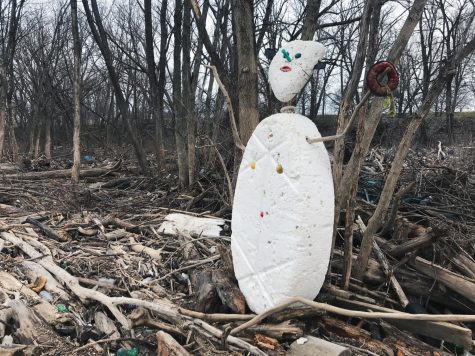 Having earned a Masters of Fine Arts in Illustration, Gorman says his artistic roots in drawing lend strength to his chosen medium.

“I never saw myself working with plastic river junk down here. But drawing taught me how to look at something. I’m just drawing in 3D, hoping people might learn how to look.”

Though his work is frequently exhibited locally, Gorman has not updated his blog in over a year, and he says this is because he has just one thing planned for 2020.

“I’ve seen so much out here and learned so much… about the Ohio, the animals whose trust I’ve earned, and especially people… I think I’ve finally got enough to write a book. That’s what I’m going to do next.”