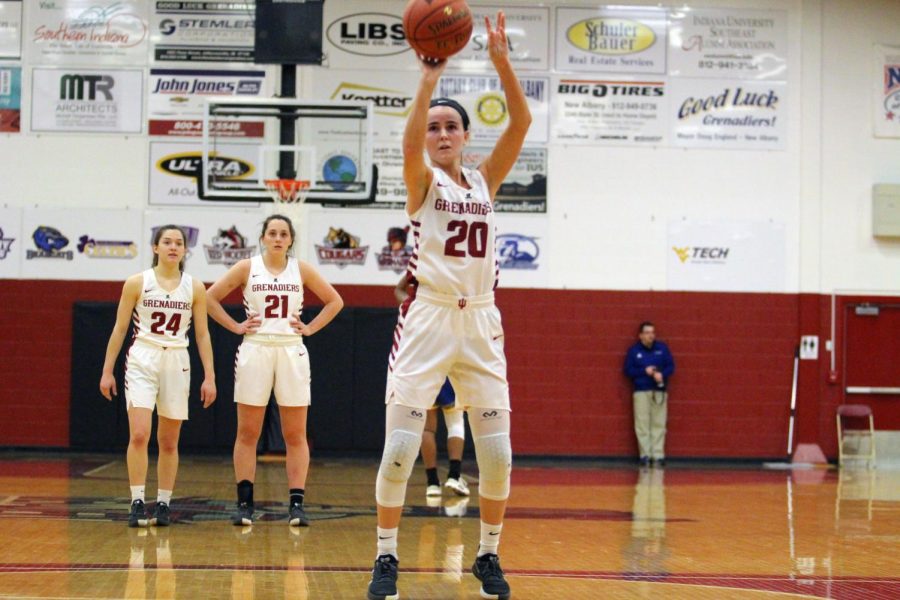 Senior Guard Madi Woods surpasses 1,000 career points with a free throw during the fourth quarter of the Grenadiers' win against Midway.

The Activities Building was near full capacity before 1 p.m. on Saturday, Feb. 15, as the IUS women’s basketball team hosted the Midway Eagles in a River State Conference match-up with heavy playoff implications. Before tipoff, the Grenadiers honored its trio of seniors: Ariana Sandefur, Madi Woods and Hannah Coleman.

The trio received plaques and gift baskets from their teammates, but Woods also earned the gift of history late in the fourth quarter, making one of two free throws with 2:08 left, the first of the two attempts making her the newest member of the 1,000 point club. The moment was a cherry on top for the Grenadiers, who were able to scrape by Midway 81-74. Six Grenadiers scored in double figures, including all three seniors.

“My biggest concern was [us] playing as a team and getting a team win,” Woods said. “Sometimes we have a good first half and then the third quarter really gets us, so today we put together a full four quarters to win the game.”

The Grenadiers started the contest with an 11-4 run, though 3-pointers Sierra Graham and Jill Enix helped to keep it close. Sandefur scored seven of her 18 points in the period, tying her season-high, as she helped lead the Grenadiers to a 21-17 lead at the end of the quarter.

The Grenadier lead grew into double digits at times during the second quarter, thanks in large part to Coleman, who scored 11 of her 15 points in the period on 5-of-6 shooting, as well as capitalizing on seven Eagles turnovers. Those two factors lead to the Grenadiers entering the locker room with a 38-29 advantage.

“Hannah had struggled for a couple games in Oakland City and Asbury because she didn’t seem to be competing,” Head Coach Robin Farris said. “I talked to her about it and in the last two games, she’s really competed.”

The Eagles tried to mount a comeback throughout the second half, eventually cutting the deficit to 61-59 with 5:24 left, but the Grenadiers made timely shots, including a pair of deep Sandefur 3-pointers before the shot clock expired, eventually leading to a final of 81-74.

Woods finished the game with 10 points, along with four rebounds, three assists, and two steals. Freshman Emmy Ralph chipped in 14 points as well. The Eagles had three players score in double figures, led by Leisa Butler, who finished with 24 points and nine rebounds.

With the victory, the Grenadiers move into first place in the RSC West with one game left to play. That one game is against IU Kokomo, whom the Grenadiers previously beat 83-64 on Jan. 14 at Kokomo. The Grenadiers host the rematch as part of the final home doubleheader of the season, which kicks off at 5:30 p.m.
Woods Joins the Club
With a made free throw in the fourth quarter of last Saturday’s win against Midway, senior point guard Madi Woods becomes the 28th Grenadier in program history to join the 1,000 point club. She is now the third Grenadier in as many seasons to accomplish the feat, joining former teammates Annie Thomas (2018) and Josie Hockman (2019).

Woods, a product of Mercy Academy in Louisville, has been a major contributor to the program over the past four years. Along with her 1,000 points, she is also a member of the 200 Assists club and has the second highest career free throw percentage in school history (81.8% as of Saturday). Her performance in games and in practice over the past four years has impressed her coach Robin Farris.

“Madi has just been a perfect citizen, she never makes excuses and she always gives her best,” Farris said. “You have someone like that in your program for four years, you’re lucky because you know what you’re going to get.”