Grenadiers ignite the court in second half against Trail Blazers, advance to RSC Semifinals 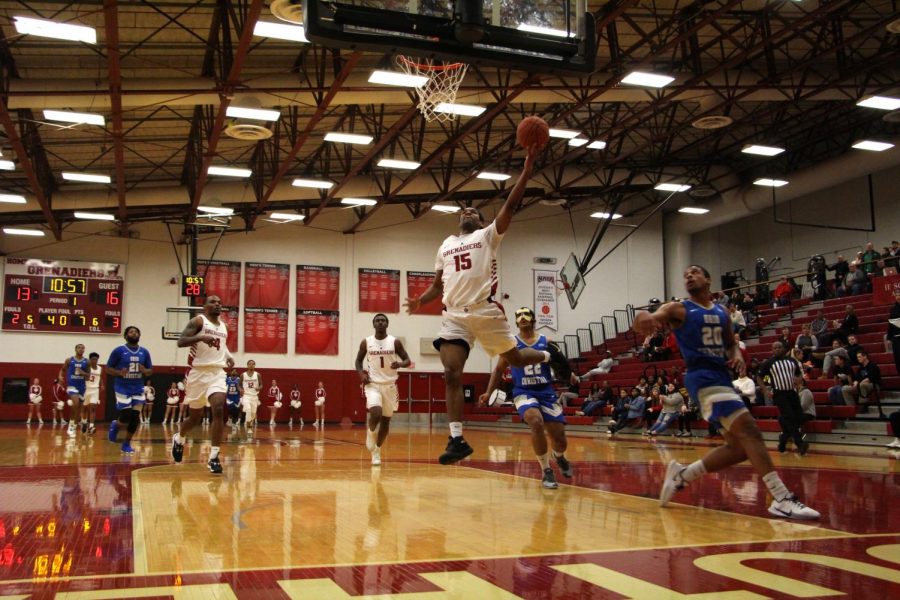 Junior David Burton goes up for a fastbreak layup during the first half of the Grenadiers’ RSC Quarterfinal victory over Ohio Christian.

The IUS Men’s Basketball team came into last Wednesday’s RSC Quarterfinal as the heavy favorite. As the top seed in the RSC West, they were pitted against Ohio Christian, the No. 4 seed in the RSC East. Many Grenadier fans in attendance expected a blowout from start to finish.

However, the Trail Blazers were the ones to start the game hot, opening the contest with a 9-2 surge. It didn’t take long for the Grenadiers to catch up and keep the deficit in single digits. They were cold from beyond the arc, shooting a paltry 2-for-13 (15.4%) from three while the Trail Blazers hit over 53 percent from the field.

“Our defense was really bad in the first half,” Head Coach Wiley Brown said. “We weren’t rotating out on shooters, which is bad because every team in the league has shooters. Anything can happen in this Conference Tournament and they were just hitting their shots.”

One of their saving graces was their ball control, turning the ball over only six times as opposed to the Trail Blazers’ 11. The Grenadiers also earned 10 points from sophomore Jaivaughn Jackson. Despite this, the Trail Blazers retreated to their locker room at halftime holding a 41-36 advantage.

“We just had to pick it up because we started lackadaisical,” David Burton, a junior at IU Southeast, said. “In the second half, [Coach Brown] really got on us to pick it up and put the pressure on [Ohio Christian].”

The Grenadier offense came to life in the second half after Anthony Wales Jr. knocked down a triple, igniting a 26-5 surge to take the lead. They never relinquished that lead while en route to a 93-79 victory.

Leading the way in the second half for the Grenadiers was Burton, who erupted for 21 points after scoring only six in the first half. He ended the night with a career-high of 27 points, going 8-of-10 from the field and a perfect 4-for-4 from three.

Trail Blazers’ forward Justin Barksdale had 18 points in the first half, but the Grenadier defense locked him down, allowing him only three throughout the second half. Freshman Ben Casey had 16 points and 10 rebounds while senior Jermaine Smith chipped in 10.

“The way David Burton goes, that’s the way the team goes,” Brown said. “He started to hit some shots and everybody started attacking the rim.”

Along with Burton’s 27 points, Jackson finished with 19 points and five assists. Wales added 11 points in the effort.

With the victory, the Grenadiers advance to the RSC Semifinals. They will host the semifinals at the Activities Building and welcome No. 23 IU East, who the Grenadiers previously lost 81-73 in Richmond back in January. The rematch is set for this coming Saturday, Feb. 29, at 3 p.m.

“You cannot disrespect this game because it will disrespect you, it’s a defensive game,” Brown said. “I told the guys not to worry about missing shots, they need to be worried about the defensive end.”