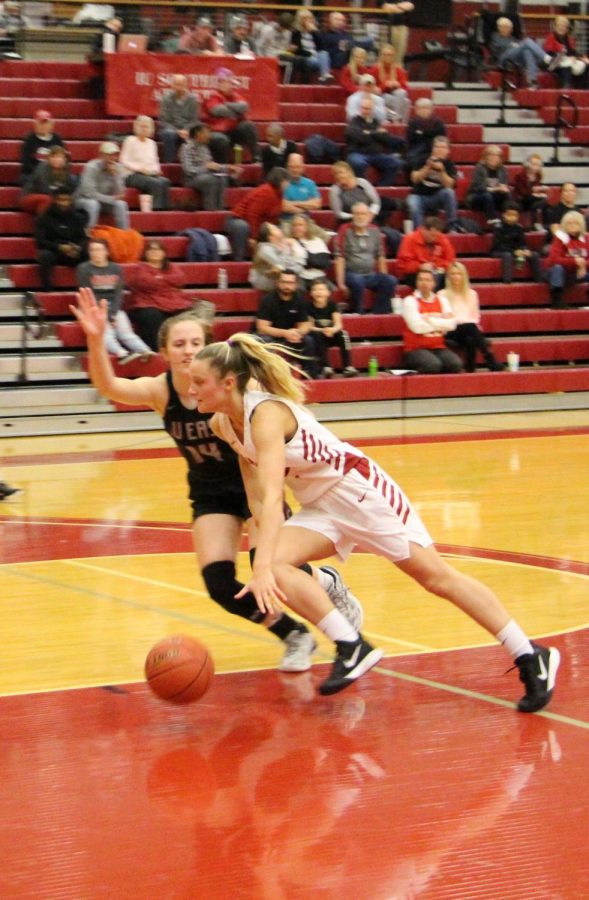 IUS sophomore Lauren Lambdin tries to drive past IU East’s Addie Brown during the second half of the Grenadiers’ RSC Quarterfinal victory over the Red Wolves.

“We had that huge win over Midway [on Feb. 15], then turn around and lost to Kokomo, I was upset with how we played in that game,” Lambdin said. “I’ve been off lately so it was nice to see the ball go through the net. I got a lot of extra shots up this week because I knew we were playing at home.”

The first two quarters of the contest were even between the two sides, resulting in nine ties before the Grenadiers began to pull away in the second period. They were led by Lambdin, who scored 13 of her 27 points in the frame and shot a perfect 7-for-7 in the first half.

“That young lady’s had the best practice all week,” Head Coach Robin Farris said about Lambdin. “I thought that if I don’t get her in the first three or four minutes of the game, I’m stupid, so I put her in early and she goes seven for seven in the first half.”

Ball control was key throughout the half. The Red Wolves had eight turnovers compared to just three Grenadier miscues. A three by Faith Zurby with less than a minute led to a halftime score of 40-37 in favor of the Grenadiers.

The second half began in similar fashion to the first two quarters.  The Grenadiers never surrendered the lead, but they could not pull away for the entire frame. It wasn’t until late in the final period when the Grenadiers increased their advantage into double digits courtesy of a 13-3 run, sealing the victory.

Four other Grenadiers joined Lambdin in scoring double figures, including the senior trio of Madi Woods (14), Ariana Sandefur (11), and Hannah Coleman (10), as well as sophomore Natalie Fichter (11). Addie Brown led the Red Wolves with 17 points, while Megan Harlow and Kamiylah Bomar each chipped in 12 and MaKayla Blount had 11.

With the victory, the Grenadiers move on to the RSC Semifinals, where they will host Rio Grande on Saturday, Feb. 29, at 1 p.m. If they win, they have a chance to host the RSC Championship game after the conference regular season champion, West Virginia Tech, lost 62-61 to IU Kokomo.

“We have everything to prove because we got lucky after we found out we were the one seed,” Lambdin said. “So whoever we play next, [the game]’s ours for sure.”