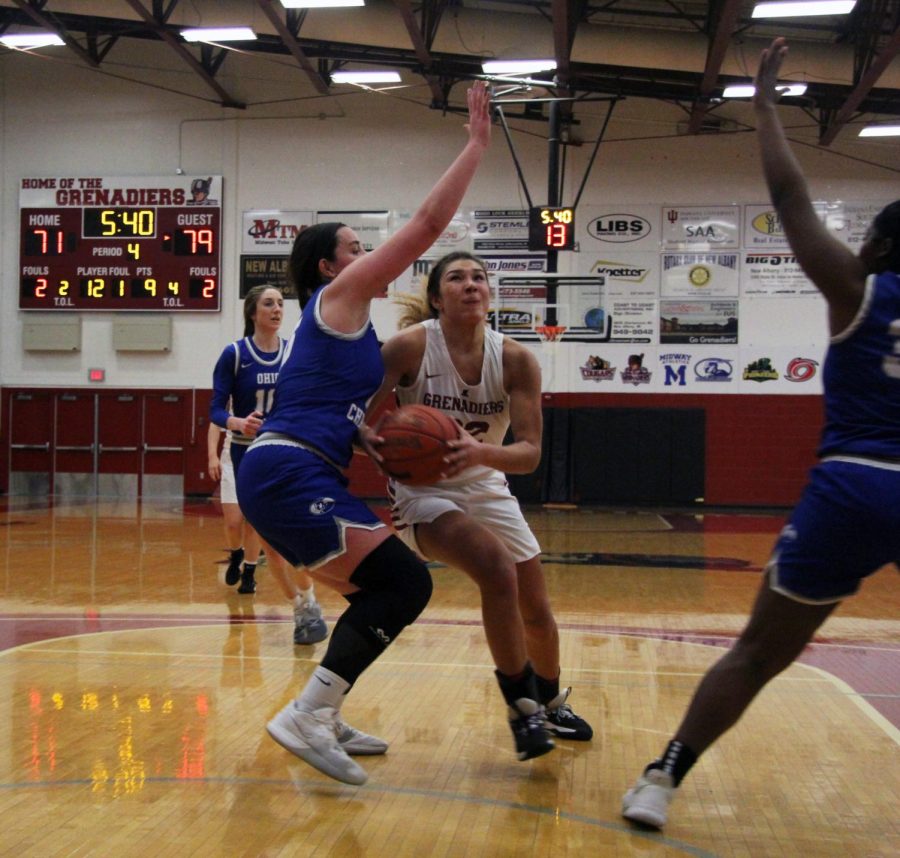 Grenadiers senior forward Hannah Coleman tries to drive through Ohio Christian's defense during the fourth quarter of the RSC Championship.

The stage was set on Tuesday, March 3 for the River States Conference Championship game, which was hosted at the Activities Building at IU Southeast. In one corner, the IUS Women’s Basketball team, fresh off a thrilling 96-95 victory in the RSC Semifinal on Feb. 29.

In the other corner was Ohio Christian, who demolished IU Kokomo 106-73 in the semifinals. Fans of both teams packed into the Activities Building in what was expected to be yet another close contest. Those expectations were dashed as a red-hot Trailblazer offense overcame many late Grenadier runs for a 95-82 victory.

“I feel bad because we just couldn’t find an answer,” Head Coach Robin Farris said. “We had several runs, but just couldn’t get over the hump.”

The first quarter gave the illusion of a close game as neither side gained a lead higher than four points. The Grenadiers relied on several players to contribute to their offense early on, with senior Ariana Sandefur leading the way with eight points in the period.

The Trailblazers meanwhile relied on their guard tandem of sophomore Helania Limas and senior Staci Pertuset for most of their first quarter offense, scoring 10 and nine respectively. Senior Carolane Cox only had a single field goal in the frame, a last-second layup to cut the Grenadier lead to 26-25.

That layup was the calm before the storm that was the second quarter, as the Trailblazers spent the entirety of the period on a 23-8 surge, holding the Grenadiers to a frigid 17.6 percent from the field before retreating to the locker room with a 48-34 edge. Pertuset and Limas finished the half with 15 points each.

“[Ohio Christian] have two phenominal guards in Pertuset and Limas and a good big kid in Gilllium, they were just on fire tonight,” Farris said. “We just ran into a buzzsaw.”

The Trailblazers started the third quarter by adding to their advantage, leading by as much as 17 halfway through the period. The Grenadiers refused to give in, leaning on eight points each from Hannah Coleman and Emmy Ralph, as well as back-to-back triples from Natalie Fichter to end the frame reducing the deficit to 69-60.

In the final period, the Grenadiers were able to get to the lead down to six, but a mixture of missed three pointers, foul trouble, and inferior rebounding down the stretch ultimately led to the conclusion of their season. Pertuset led all scorers with 35 points while Limas had 27. Rachel Gillium posted a double-double with 11 points and 13 rebounds.

Six Grenadiers scored in double figures, led by Coleman and Lauren Lambdin, who each scored 16. Seniors Ariana Sandefur and Madi Woods chipped in 13 and 12 respectively in their collegiate finales.

“Honestly, I didn’t think we’d make it to .500 this year because we lost so much, so that’s a testament to them,” Farris said. “I’ve enjoyed coaching this year more than I have in probably the last five or six years.”

With the victory, the Trailblazers locked up a berth to the NAIA Division II National Tournament for the first time in program history, just a year removed from a 2018-19 season where they won just one game in RSC play.

The Grenadiers end the year 20-12 (9-7 RSC), having won the RSC West, and will graduate a trio of seniors in Coleman, Woods, and Sandefur. Coleman, who was recently named to the All-RSC First Team, led the Grenadiers with 11.8 PPG, 6.8 Rebounds, and 51 blocks.

Woods, who was named to the All-RSC Second team, as well as to the RSC Champions of Character Team, finished the year with 10.0 PPG, a team-leading 54 steals, and is the 28th Grenadier to reach the 1,000 Point Club, which she accomplished on Feb. 15 against Midway. Her 1,043 points are good for 21st in program history, while also finishing second all-time in Free Throw Percentage with 82.4 percent.

“The senior leadership has been awesome this season, which is probably why we were so successful,” Farris said. “Hannah was our best athlete and had a decent year and Madi had a solid year. Ariana was a question mark at the beginning of the year and ended up having a solid year.”