Students, faculty and alumni lend their musical talents to liven up the Athletics Building 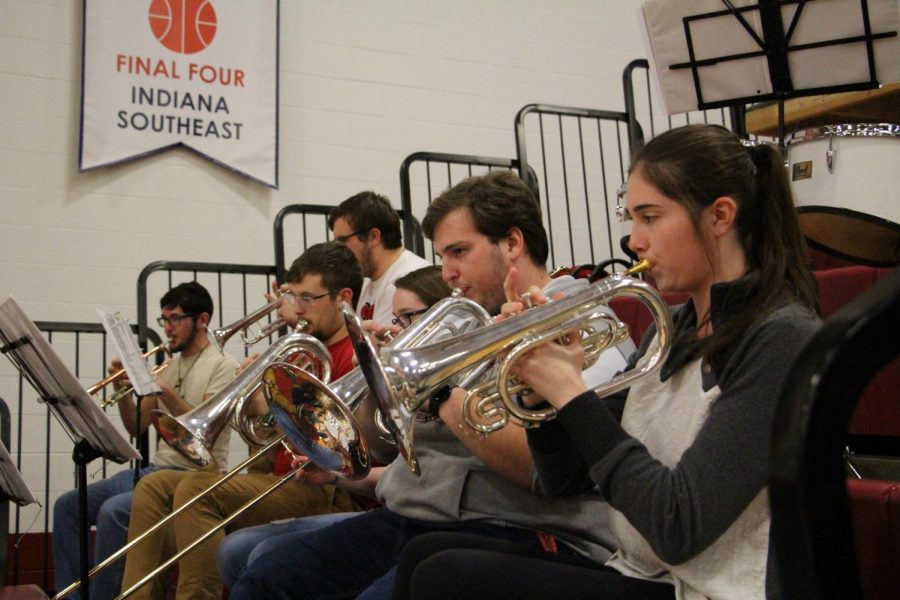 As IU Kokomo’s point guard prepares to shoot a free throw, a group of people in the corner of the stands puts forth a symphony of chants, hoots and hollers in an attempt to distract the player.
He misses the shot and chants of “soiled it, soiled it” ring through the Athletics Building, courtesy of The Southeast Sound, IU Southeast’s pep band. As IUS players dribble down the court, the band leads chants of “go big red!” and “whoop, there it is!”
In addition to playing music during time-outs and halftime, they serve as de facto hype-people for both the athletes and the crowd. While relatively small, in terms of both size and the time they have been around, the band has a huge impact on the feel and atmosphere of the games.
Director
Jennifer Gordon is the director of The Southeast Sound—she was hired by the university in 2011 to create a pep band since the school did not have one in prior years.
Before being hired, she had just gotten a music education degree and was looking for a suitable job as a director. She said the experience has been fantastic, adding that it took a while to find a good core group of people.
She has tried to forge a positive relationship with IUS’ cheerleaders and create a good atmosphere at the games. She says her favorite part of the experience is the “goofy cheers the band does” during games.
Gordon has been playing music since the sixth grade, where she played clarinet. though as director of the pep band she plays tuba. She described the experience of directing the pep band as being low pressure.
“We play because it’s fun,” Gordon said.
Clarinet
Caitlyn Schultheiss is a clarinet player for The Southeast Sound. She is an IUS alumna and has been a member for seven years. She joined because she previously knew Jennifer and was in band in high school.
She described her experience as being fun but challenging at times. She really likes the people involved and said that is her favorite part of the whole experience.
She says pep band is a fun way to continue playing music after high school and something to do during free time. Her mother is also a member of the band, who was one of the first community members to join.
Flute
Kristina Peter plays the flute and is another alumna member of the pep band. She first joined in 2014, deciding to join the band in lieu of a sorority.
She described pep band as a “fun ride” and a good way to get away from stress. Like Caitlyn, her favorite part of being in the band is the people. She started playing music in the sixth grade and has been doing it ever since.
Clarinet
Mildred Vernia is a math teacher at IU Southeast who plays clarinet in the pep band. She joined because she said she thought it would be a cool way to get back into music.
She has been a member of the pep band for nine years and is one of its original members. She has enjoyed the experience and said it changes the mood of the games.
She likes how people “aren’t afraid to get crazy” and that the players enjoy it more as well.
Vernia started playing music in junior high school, but had not played for twenty years before joining the pep band. Over the years, she has noticed that the band shrinks and grows, and mentioned that she talks to her classes and community members to offer them to join.
“We can always use more people,” Vernia said.