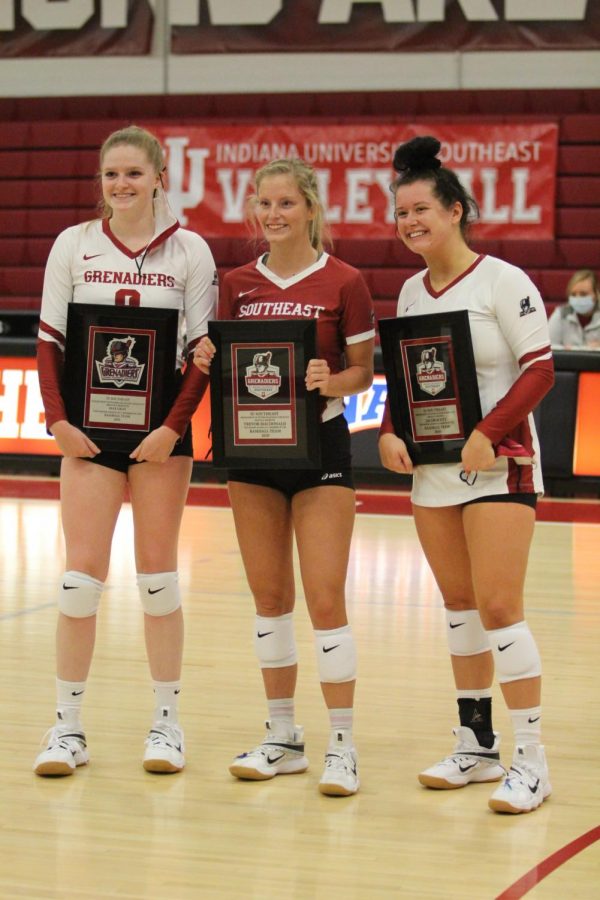 With the successful completion of the IU Southeast Volleyball team’s home opener against Oakland City on Sept. 17, the IUS Athletic Department updated their spectator policies, allowing athletes from both teams to bring two family-members (preferably parents or legal guardians) to enter the Activities Building so long as they adhere to CDC Guidelines. The full spectator policy can be viewed at http://www.iusathletics.com/article/2333

This change in policy allowed the parents of the Grenadiers seniors, libero Kenna Burman, setter Hannah Sipe, and middle blocker Alexis Bassett, to be there to help honor the trio on Friday, Sept. 25. Normally, senior night festivities are held towards the end of the regular season, but with the onset of the COVID-19 pandemic, both team and department officials saw the need to properly honor the senior class early in the year in the event the season is postponed later this year.

In front of spectators for the first time this season, the Grenadiers took the court against River States Conference rival Asbury, who were playing their first conference match of the year. The match was the second of the year for the Grenadiers, sweeping Oakland City in three sets.

The first set saw the Eagles surge to a quick 11-5 edge, taking advantage of a Grenadier lineup that stumbled offensively with seven errors early on. The Grenadiers fought back and battled the Eagles through the remainder of the period, never trailing by more than five points the rest of the way. Despite being tied at 25, a service error by Asbury’s Rilee O’Day and a Delaney Nichols kill helped the Grenadiers take the first set 27-25.

“I knew it was going to be tough because Asbury usually plays well against us,” Bassett said. “In the first set, we were kinda in our heads because we had a crowd today as opposed to last week.”

The second set saw a more even effort from both sides from start to finish, with the largest deficit being a 15-7 Grenadier lead. Despite the Eagles using a 6-1 run to tie the score at 20, the Grenadiers scored five of the next seven to take a commanding two-set lead by a score of 25-22.

“A couple of times in the second set, we would take our foot off the pedal,” Brian said. “We just kind of go through the motions. By the third set, we knew we needed to play better.”

The third set proved to be the finale as the Grenadiers took near-complete control during a 14-3 rampage to start the period, eight of those points coming on Eagles miscues. The Grenadiers ended the match courtesy of three straight Eagles attack errors, as well as a match point kill from Abigail Vogel to seal the set and match 25-10, sending the seniors home happy.

Despite the Grenadiers (2-0, 2-0 RSC) not playing their best in the first two sets, they outmatched the Eagles in both kills (41-24) and assists (40-22). Sipe led the way with 29 assists while Burman chipped in seven. Burman, the reigning RSC Defender of the Week, led on defense with 16 digs.

“Honestly, senior night worked out better being early on in the season because we know we have a lot more home games so it wasn’t emotional at all,” Sipe said. “We weren’t thinking about tonight being senior night, we were just focused on beating Asbury.”

While Friday’s events marked an unusually early senior night celebration, it didn’t matter much to the Grenadiers, especially the seniors.

“I’m glad that we were able to have a senior night,” Burman said. “I’d rather have it now than risk it getting canceled, and we ended up playing good.”

With Friday’s contest included, both Sipe and Burman continue to etch their names deeper into the program’s record books. With her 29 assists, Sipe is now 14 away from notching 3,000 for her career. The 2,986 she currently has is fourth-most in program history. She’s also second all-time in Assists per Set (8.15) and fifth in service aces (132). Along with these statistical accomplishments, she is also a 2019 All-RSC First Team and 2018 All-RSC Second Team selection, and an eight-time RSC Setter of the Week.

Bassett joined Burman and Sipe on the All-RSC First Team last season, notching a .352 Hitting Percentage, the third-highest in the RSC and ninth highest in the NAIA.

The Grenadiers continue their weekend schedule by traveling to Midway on Saturday, Sept. 26. Midway currently does not allow visiting spectators to their indoor athletic events, so anyone wishing to watch can do so via Livestream at https://portal.stretchinternet.com/ius/