Why Voting Matters to Me event grants students civics soapbox 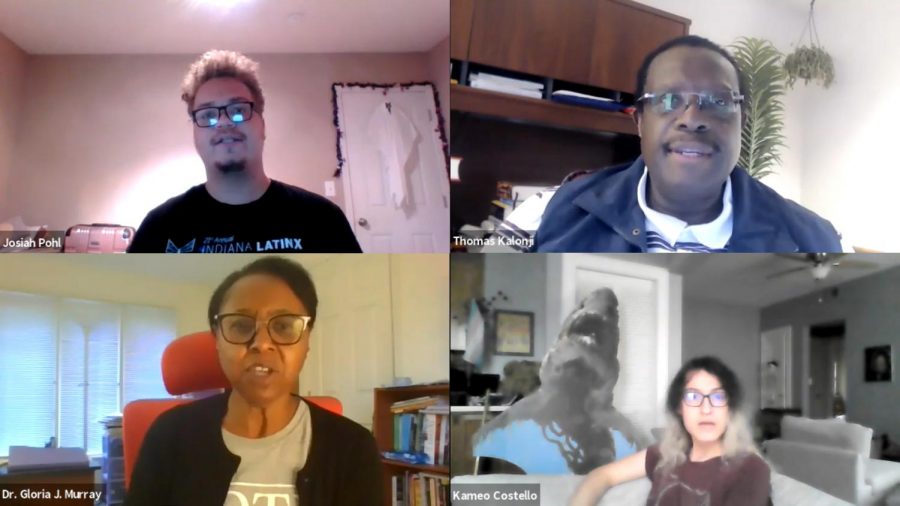 Photo illustration of the virtual meeting.

The IU Southeast Student Government, the School of Social Sciences, and the Political Science Club hosted a public forum Monday in which students were given a platform to speak their minds about registering to vote and the current political landscape.

Why this is important:
Associate Professor of Political Science Margot Morgan said this event was an attempt by IUS faculty to “encourage a sense of civic duty” among the student body. The event featured six student speeches on why voting was important to them, ranging from pleas to political loyalties, to appeals to civic and personal principles, and even to very personal stories from an international student about voting rights in Congo.

As Thomas Kolanji, an aspiring US citizen and junior international studies student, pointed out, “There are countries where voting is fraudulent or not possible, and you should take advantage of your privilege.”

What students had to say:
The student speeches varied quite a bit from each other, but the resounding agreement was that “Gen Z” needs to get out and vote for their future leaders. Student Council President Kameo Costello used the metaphor that “voting isn’t a taxi” that takes voters where they want to be for their political ideals and that instead “voting is a bus” that takes us in the direction we prefer. Costello urged students to vote even when politicians did not perfectly align with students’ consciences, saying that these votes could still be crucial in making sure a nation did not turn against its people.

Similarly, Kolanji urged students to vote as a solemn duty, using his experience with Congolese dictator Mobutu Sese Seko as contrast to his new home in the US and telling students that they are privileged to live in such a free country.

“Voting is the first and simplest mode of action in a democracy. If you use your right to vote, it is one way of exercising your citizenship, it allows citizens to protect their freedom, and make democracy work,” said Kolanji. “It’s an obligation, I think.”

Faculty reaction:
The response to the event and the student participation within it was very favorable, with both the faculty members present praising the civility and responsibility with which the student body responded to opposing opinions and the upcoming election.

“This is what we need in the United States right now… we need more conversations like this one. No one was demonized, no one was vilified, and in general I think there was a lot of agreement, even across party lines, about what our focus should be,” Morgan said.

Interim Director for the Office of Service Learning and Community Engagement Gloria Murray engaged with students during the final question and answer session with the planned speakers and audience, hashing out her views on everything from the electoral college to low voter engagement.

“If you agree to vote then you need to make sure that you’re a part of organizations that are out in the community pushing for people to vote,” Murray said. “I’ve been out in the street trying to get people registered to vote, that ends on the fifth, but then after that I’ll be out on the streets trying to make sure people go to the polls. I think we have to do that.”

What’s next for the Social Sciences Department:
Given the event’s warm reception and the upcoming election, the Social Sciences department is excited to host another event like this one nearer to the election in late October, which will be a Social Sciences on Tap event on why voting matters and a Discord “Debate Watch Party” where students, faculty, staff and alumni can stream the presidential debates live and talk and comment on them together with their own private Discord channel. Morgan has high hopes for future events after this one and encourages the entire student body to participate.

“It’s going to be a really interesting experience,” she said. “I’ll be on there for every single debate, including the gubernatorial election.”