Seven COVID-19 positive cases have been reported out of 674 total tests so far this semester on the IU Southeast campus according to testing data released by the university. 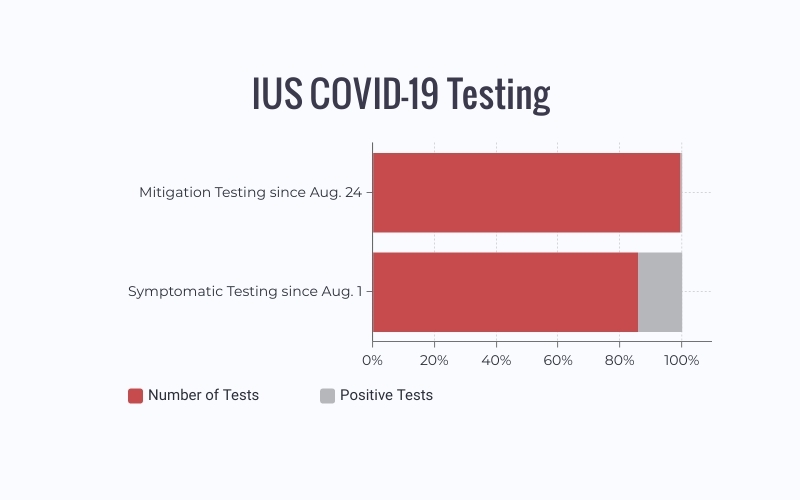 IUS is conducting COVID-19 drive-thru mitigation testing throughout the fall semester in an attempt to identify and isolate COVID-positive members of the university community.

Emails provided to The Horizon show those selected for mitigation testing are advised not to participate in the testing if they are experiencing any COVID related symptoms, have tested positive for the virus in the past 90 days, or are currently quarantining after contact with someone who tested positive. Students and faculty are also not supposed to eat, drink, smoke, vape, or chew gum 30 minutes prior to their test.  For these reasons, mitigation testing data released by the university might not be fully representative of actual IUS COVID-19 cases.

As of October 7, IUS has conducted 674 total tests between Mitigation (656) and Symptomatic (18). Seven cases have been confirmed positive, a rate of 0.1%.

The week of Aug. 29, the university tested 111 students or faculty. All of these tests came back negative. The following week, the university reported three people out of the 192 that tested positive. There were 187 students that did not feel any symptoms.

The university reported no positive results of the 108 tests conducted the week of Sept. 13. The following week, one person of the 118 tested was reported COVID-positive. Since testing began on August 24, 4,968 students and faculty have been tested across all IU campuses. As of October 7, 11 of those tests have come back positive, a rate of 0.2%.