Volleyball gets much needed victory with sweep of Brescia 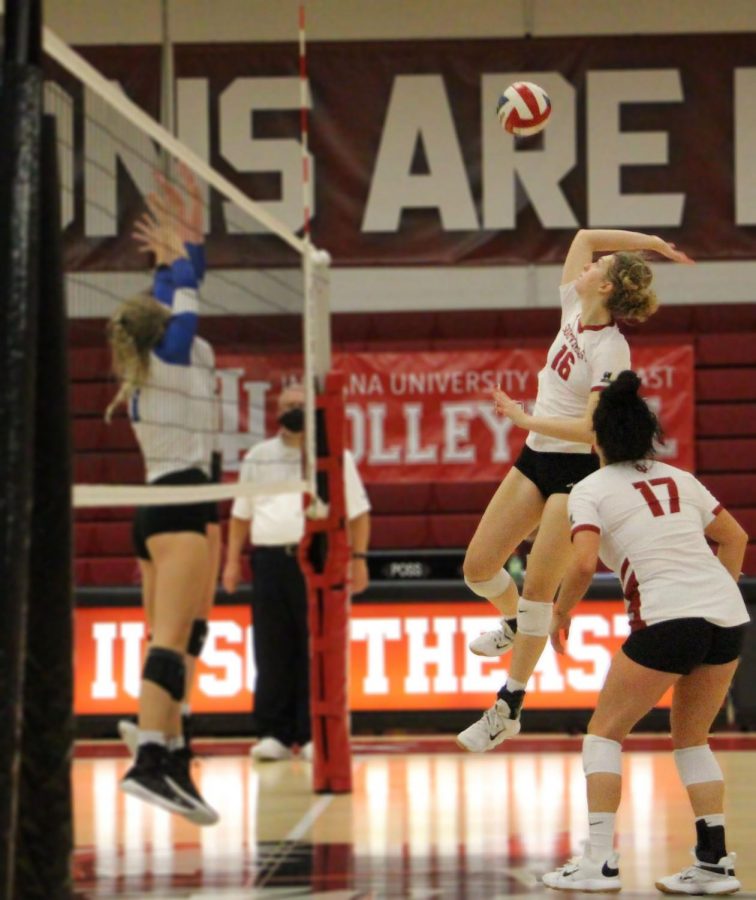 Junior Jennie Malone rears back to kill off an assist by Hannah Sipe (17) in the second set against RSC rival Brescia.

After falling in four sets to Lindsey Wilson on Thursday, the IU Southeast Volleyball team owned a three-game losing streak coming into Saturday’s matchup against River States Conference rival Brescia. Despite dropping five of their last six matches coming in, the Grenadiers had more confidence against the Bearcats, who they beat on Sept. 29 in Owensboro. The rematch was originally scheduled to play on Tuesday, Oct. 13, before being rescheduled. After a slow start to the match, the burden on the Grenadiers’ shoulders lightened somewhat as they swept the Bearcats in the Activities Building.

The first set saw the Bearcats take advantage of a Grenadier defense that stumbled out of the gate, scoring the first two points of the match via service ace and set error. The Grenadiers quickly responded, quickly answering back to tie the set at 2-2 before surging ahead on an 11-5 run, fueled in part by kills from freshman Abigail Vogel and junior Delaney Nichols. The Grenadiers never trailed again in the period before taking it by a score of 25-17, ending it on a Bearcats service error.

The two rivals started the second set by splitting the first ten points before the Grenadiers exploded on a 12-1 surge. The Bearcats put up hardly any fight in the period as the Grenadiers took advantage of multiple miscues, including three consecutive attack errors between Madelyn Yonts and Hannah Beitler, before taking the second set 25-13.

The third set started similarly to the second, with both sides splitting the first 20 points of the period. Both sides remained even down the stretch, but the Grenadiers took five of the last seven points to take the third period 25-20 and complete the sweep.

“We got off to kind of a slow start because we had confidence from the last time we played [Brescia],” Freshman Hannah Miller said. “I think we were a little too confident at first, but then we got it under control and realized we needed to work hard to win.”

The Grenadiers not only had the more aggressive offense, outkilling the Bearcats 36-26, but were also more efficient, committing only 25 total errors as opposed to the Bearcats’ 37.

With the victory, the Grenadiers move to 5-6 (5-5 RSC) and complete a two-game season sweep of the Bearcats (3-4, 3-4 RSC). The match also marked the return of freshman Outside Hitter Emilee Organ, playing for the first time since sustaining an undisclosed injury that caused her to miss three matches. The Grenadiers also went without senior Outside Hitter Alexis Bassett, who was nursing an ankle injury. Several freshmen stepped up in the absence of both Organ and Bassett, including Vogel, Miller, Izzy Stallard, and Brandy Eisenback.

“We’re fortunate that our talent at every position runs deep,” Brian said of his freshmen. “They compete every day in practice, they just don’t always get the opportunity to show what they’re capable of during matches.”

The Grenadiers return to action on Tuesday, Oct. 27, when they welcome St. Mary-of-the-Woods, at 7 p.m, which will be the last time the two programs square off as nonconference opponents. Early this week, the Pomeroys were approved to enter the River States Conference, effective July 1, 2021, bringing the total number of schools in the conference to 14. The Pomeroys are in the process of transitioning from the United States Collegiate Athletic Association (USCAA) to the NAIA and RSC and will be eligible for postseason competition starting in the 2021-22 academic year.