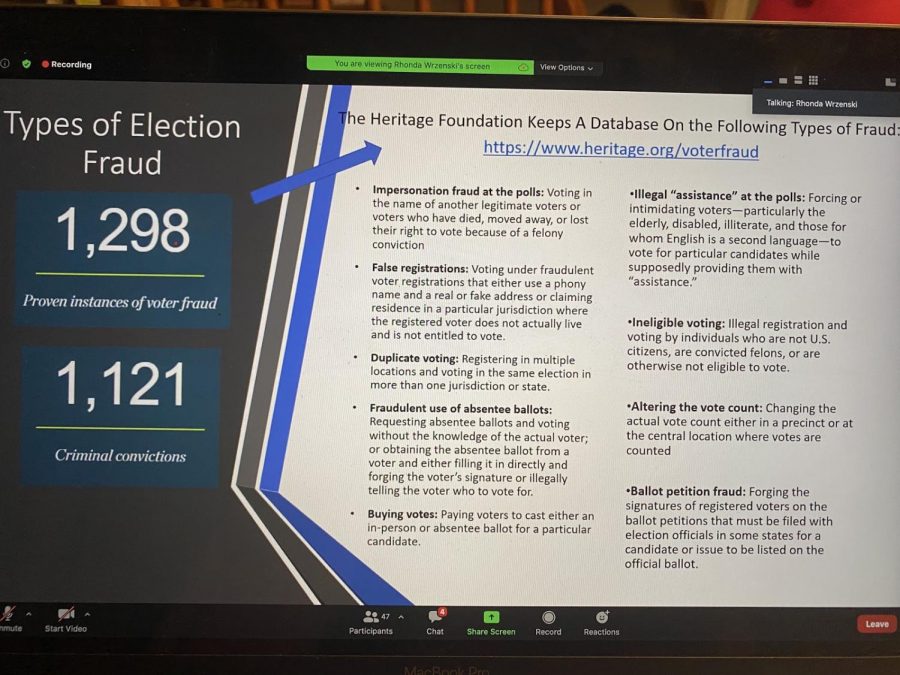 A photo taken of the Coming Together virtual event. Rhonda Wrzenski spoke about the different types of fraud that can occur in elections.

IUS faculty met virtually at the “Coming Together Event” to discuss the election and its many facets, including the psychological impacts, voting implications, and the media’s influence when covering the election.

Director of IUS’ Counseling and Psychological Services Michael Day talked about what students should do in order to help their mental health during this week’s election uncertainty. His recommendations for students were getting adequate sleep, healthy eating habits, having a good support system, and taking a break from the media. He said that even sometimes having a healthy distraction can be okay during these uncertain times.

Rhonda Wrzenski, an associate political science professor, then discussed how every state has different regulations about counting votes.

For example, states differ on whether they allow mail-in and absentee ballots to be processed either upon receipt of the ballots, before Election Day, or on Election Day.

Margot Morgan was the mediator and organizer of this event. She contacted former Floyd County Clerk, Christy Eurton, to speak about what the process of a clerk is like during the election process.

Eurton discussed the security process of verifying ballots in Indiana as well as other states.

“Indiana has passed more security regulations in the last five years than they have in the last 25 years,” Eurton said.

Eurton talked about death and how that works in Indiana. If a person dies within 30 days of voting before Election Day, their vote does not count. However, if they die on Election Day and vote, their vote counts.

Political science professor Joe Wert was another speaker at this event. He spoke about the electoral college and its impact.

Wert discussed how the electoral college sometimes does not always make the final decision about who wins the presidency. Sometimes one candidate can win one vote versus another type of vote. This happened in the 2016 Presidential Election where Hillary Clinton won the popular vote, but President Donald Trump won the electoral college votes.

The last speaker at this event was Adam Maksl, who is an IU associate professor of journalism and media. He emphasized three ways for people to get the most out of the news media and to avoid bias.

“Learn a little about the media system, its structure, how it works, and how we react to the media,” Maksl said. “Be skeptical, not cynical. Check facts and lean on institutions to help in that fact checking process.”

The event ended with a brief Q&A session, followed by a discussion of the possibility of future events and opportunities for students to attend.