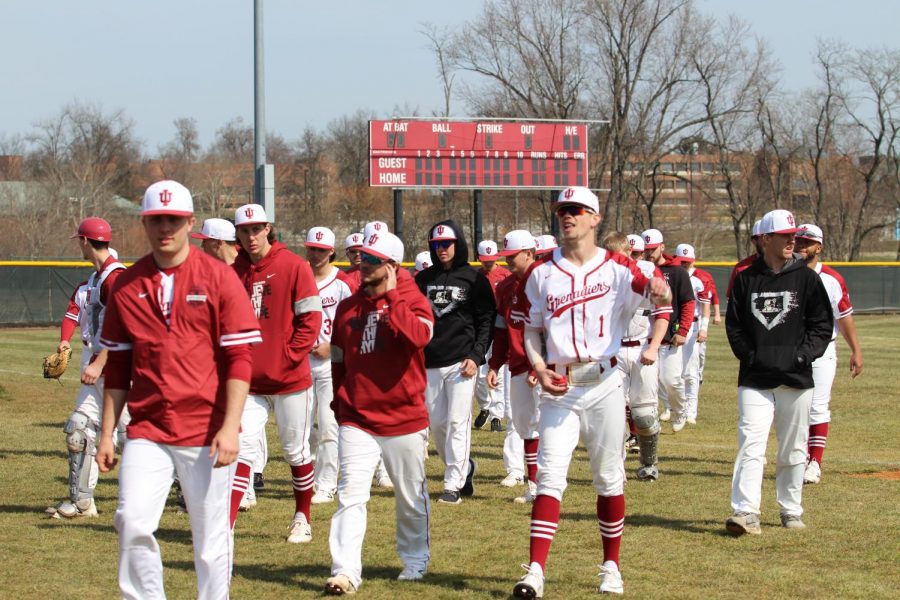 The IUS Baseball team returns to the dugout upon completing throwing practice prior to a contest against West Virginia Tech on March 1, 2020.

That Was Then, This Is Now
2020 was brewing to be a season for the ages for the IU Southeast Baseball team. The Grenadiers won their first 12 contests, which was not only their best start under Head Coach Ben Reel but also one of their best starts since the athletics website began to chronicle team schedules in 2005. Even a walk-off loss in the first game of a doubleheader against #25 Campbellsville barely slowed the Grenadiers down en route to an 18-1 start to their campaign.

The Grenadiers breezed through their first two series in River States Conference play, sweeping three-game series against West Virginia Tech and Ohio Christian respectively. After an 11-7 victory at Lindsey Wilson on March 11, the Grenadiers were set to welcome fellow RSC powerhouse Point Park to Koetter Sports Complex for a decisive three-game weekend series on March 13-14.

Then the COVID-19 pandemic swept across the country, halting a campaign as quickly as it began to reach the anals of Grenadier lore. The 2020 season will be remembered by many Grenadier faithful as the historic season that never was, though Reel knew there were some things bigger than history at stake.

“I thought that IU has made some great decisions through this ordeal, and I’ve been impressed by Chancellor Wallace’s leadership, [Vice-Chancellor] Amanda Stonecipher and [Director of Athletics] Joe Glover’s leadership,” Reel said. “These are unprecedented times, there’s no blueprint to do this, so I think they’ve made a lot of overwhelmingly great decisions.”

With the stoppage of play beginning as of March 16, the Grenadiers concluded at 18-1 (6-0 RSC), ranked #12 in the final Perfect Game NAIA poll. They also finished ranked in numerous offensive categories, leading all of NAIA in Doubles and Triples per Game (2.842 and 0.632), as well as ranking second in Fielding Percentage (.978) and third in Batting Average (.362).

Coming into 2021, the Grenadiers find themselves on both familiar and previously uncharted grounds when it comes to rankings. When the RSC released its Preseason Coaches poll in early November, the Grenadiers were picked to finish atop the conference for the fourth time in the last five seasons.

While maintaining a consistent presence towards the tail end of the NAIA Top 25, the Grenadiers’ dominant 2020 saw their ranking in the national scene ascend. Shortly after the RSC Preseason Coaches Poll was announced, the NAIA equivalent ranked the Grenadiers #11, the highest ranking in program history at the time. Perfect Game released its Preseason Poll on Jan. 19, moving the Grenadiers to #10 to begin the upcoming campaign.

“We’re all just excited to be back together,” Reel said. “I don’t think it’s even the play, it’s just to be able to see the people that we love. Being able to enjoy the ride, that’s what it’s all about.”
Running It Back
The high preseason rankings mean that 2021 will be a year of high expectations for the #10 Grenadiers. They are in a prime position to meet, and perhaps even exceed those expectations, as they return almost their entire roster from a year ago.

After getting the season take away from us last year, we had to come together and overcome this struggle as a team,” Utilityman Tyler Mills said. “We were upset, and we’re out for revenge this year.”

The Grenadier lineup returns many powerful bats from a year ago, led by the middle infield duo of Clay Woeste and Daunte DeCello. Woeste blossomed into the Grenadiers’ top offensive weapon in 2020, batting .368/.432/.645 while leading the Grenadiers in multiple offensive categories. DeCello led the Grenadiers with a .519 Batting Average, the fourth-highest in NAIA among qualifiers.

The outfield will once again be anchored by the likes of sophomore Derek Wagner and junior Marco Romero. Wagner, who was the Grenadiers’ top offensive star in 2019, was once again productive in 2020, leading the Grenadiers with a .630 on-base percentage and .733 slugging percentage. Romero brought a disciplined lefty-bat in a predominantly righty Grenadier lineup, striking out only twice in 52 at-bats prior to the shutdown. They will lead an outfield that also returns Santrel Farmer and John Ullom.

Rounding out the returning position players are the catching platoon of junior Brody Tanksley and sophomore Ben Berenda. Tanksley had another strong year, slashing .356/.480/.610 with 17 RBI. The switch-hitting Berenda showed significant improvement in 2020, batting .281/.457/.563 with 13 RBI.

“We’ve got a lot of guys who not only have a lot of experience, but they understand how to actually be productive consistently,” Reel said. “Most of these guys have the ability to apply the experience or knowledge that they gain, and I think that’s going to be the most influential part in all of this.”

The Grenadier pitching staff will once again be fronted by a trio of southpaws in juniors Hunter Kloke and Trevor Reynolds, along with sophomore Chas Adams. Kloke was superb in his first season since transferring from RSC rival Brescia, going 5-0 with a 2.45 ERA, fourth-lowest in the RSC. Adams, the Grenadiers’ ace in 2019, struggled in 2020, allowing a team-high 17 earned runs in 21 innings. Reynolds had a decent 2020, going 3-0 with a 4.50 ERA in 20 innings.

In the bullpen, the Grenadiers will be led by a duo of right-handers in Jacob Frankel and Brenden Bube. In 20.1 combined innings, the two juniors allowed only three earned runs while striking out 30. Both will be considered for the closer’s role in 2021, as each has also recorded two saves in 2020.

“We’re not the same people we were a year ago,” Reel said. “I am excited and I am confident that our guys understand the opportunity that they’re being presented with. They don’t just know what it takes, they understand what it takes.”
New Kids On The Block
While the Grenadiers return most of last year’s roster, it had no effect on their recruitment program, bringing in several new faces to mesh with the old guard. Leading the group of newcomers in the field is corner infielder Matt Monahan and right-handed pitcher Jared Jones, both originally from Saint Xavier University (Ill.). A decorated four-year star for the Cougars, the lefty-hitting Monahan was named an NAIA All-American Honorable Mention and Chicagoland Collegiate Athletic Conference (CCAC) Player of the Year in 2019.

“I had thought that it might be a tough transition for me to go from being a four-year guy to being a transfer in his fifth and kind of start over again,” Monahan said about transferring. “Coach Reel and the staff have been very welcoming and have the knowledge and ability to help us reach our potential and compete at our best.”

Jones looks to slide into the role of a starter immediately, providing a veteran right-handed presence to a lefty-heavy starting rotation. While not as decorated as his longtime teammate Monahan, Jones provides decent career numbers, including a 4.39 ERA and a 170/56 K/BB ratio over 236 innings.

“Our recruiting philosophy is a little bit different from some programs,” Reel said. “Not saying it’s right or wrong, it’s just that our philosophy is that it’s the person first.”
Challenges New and Old
While the Grenadiers have stood among the elites in the RSC for the past several years, they will once again have their fair share of competition. Leading the pack is IU Kokomo (12-10, 6-1 RSC), who were picked to finish second in the RSC standings. In just their fifth year in existence, the Cougars are just outside the NAIA Top 25, currently receiving votes. Part of their success lies with lefty ace Owen Callaghan, who led the Cougars with a 3.41 ERA and averaged 10.49 Ks/9, second-best in the RSC.

Alongside the Cougars in the playoff hunt is perennial RSC powerhouse Point Park (10-3, 4-2 RSC), who were picked to finish third in the RSC standings. The Pioneers return a veteran roster led by 10 seniors, including outfielder Antonio Carrillo, who led the Pioneers with a .400 Batting Average and 14 RBI.

Other challengers to the Grenadiers include Rio Grande, who won the RSC Tournament in 2019, along with Asbury, Midway, and West Virginia Tech.

However, the Grenadiers’ toughest challenger will not be walking around with a bat or a glove in its hands. Just like the rest of Grenadier athletics this year, Reel’s squad will have to work around the COVID-19 pandemic, which is still wreaking havoc across the country despite the emergence of multiple vaccines. As one might expect of a typical baseball season, schedule changes and cancellations will be imminent.

To help abide by CDC regulations, some members of the freshman have opted to redshirt this season for safety concerns, as part of an effort to limit the number of personnel in the dugout during practices and contests.

For Reel, the pandemic serves as a reminder of the most important skill to be learned, whether it be in baseball or in life; The ability to adjust.

“We’ve had to adjust, but that’s a skill we all have to learn for life anyway,” Reel said. “There are things in life that don’t happen the way you think they’re supposed to. You have to be adjustable.”

The Grenadiers’ campaign is currently scheduled to begin on Friday, Feb. 5, when they host the University of Pikeville in the first game of a three-game weekend series at St. Mathews Baseball Complex in Louisville. First pitch is scheduled for 3:30 p.m.