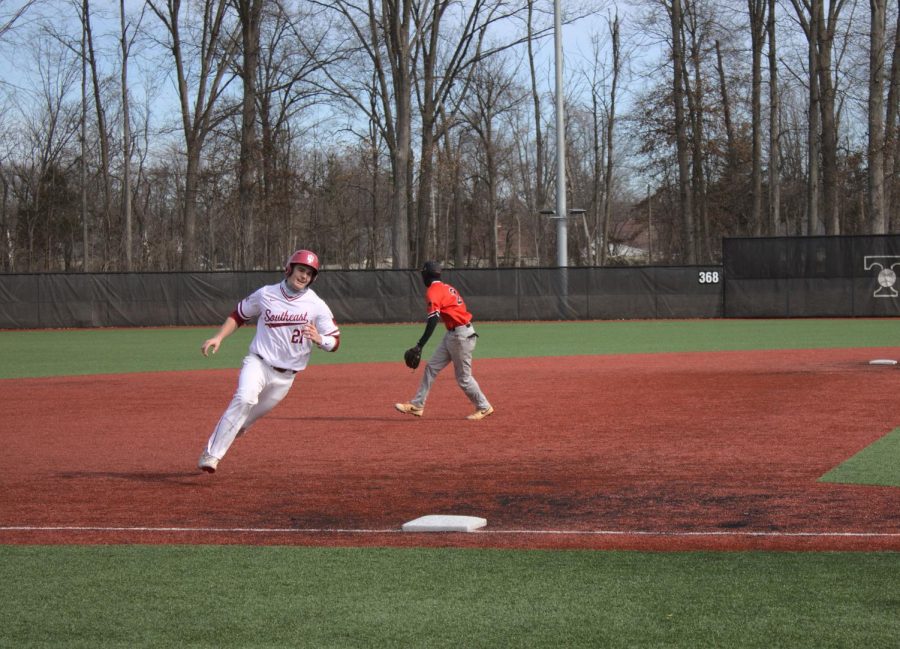 Senior Matt Monahan rounds third base before scoring as a result of Jake Scott's two-run single in the first game of a doubleheader against Pikeville on Feb. 6.

The last time the IU Southeast Baseball team took the field for competition, they walked away with an 11-7 victory at Lindsey Wilson. That was on March 11, 2020, shortly before all NAIA spring sports were set to be canceled due to the COVID-19 pandemic.

Fast forward almost 11 months later, and the #11 Grenadiers endured their longest wait in program history to retake the diamond for their 2021 “home” opener. Due to undisclosed reasons, the Grenadiers opened their season at St. Matthews Baseball Field in Louisville, where they hosted the University of Pikeville for a three-game weekend series.

Despite not having played against real competition in almost a year, the Grenadier offense picked up right where it left off from 2020, outscoring the Bears 23-5 en route to a three-game sweep to begin the 2021 campaign.

“We haven’t had a ton of time to prepare,” Head Coach Ben Reel said. “We only had a couple of weeks of practice due to restrictions with COVID, so our guys did a great job of being productive.”
Picking Up Where They Left Off
In 2020, the Grenadiers were one of the elite offenses in all of NAIA, leading the league in both doubles and triples per game (2.842 and 0.632 respectively), ranked second in hits per game (11.421), and third in batting average (.362). That offensive excellence saw little dropoff on Friday, Feb. 5, when the Grenadiers opened the season with a 12-3 blowout against the Bears.

The Grenadiers wasted little time reminding the Bears of their potent offense when Marco Romero hit a one-out single and advanced to third on an errant pickoff attempt. Brody Tanksley brought Romero home on an RBI single, which was the catalyst for later becoming a bases-loaded situation. Tyler Mills showed discipline at the plate, drawing a bases-loaded walk to plate a second run.

Bears DH Cam Marushi led off the top of the second with a home run to center to cut the deficit to 2-1, but that’s as close as they would come. In the bottom half, with the bases loaded once more, Jake Scott came through after knocking a double to left-center to clear the bases, padding the lead to 5-1. A Tanksley homer in the fourth and an RBI infield single from Clay Woeste gave the Grenadiers additional insurance after giving up another run in the third, leading 7-2 after five.

The Bears showed some more fight in the top of the seventh after pinch hitter Jackson Porter was hit by pitch. After stealing second and advancing to third, Porter scored courtesy of an error from Daunte DeCello.

The Grenadiers capped off the offense with a five-run explosion in the bottom of the eighth, led off by a leadoff double from Woeste, followed by Romero’s two-run homer. Later in the inning, with the bases load once again, DeCello redeemed himself for his earlier miscue by clearing the bases with a double to left, sealing the opener.

“To change scenery that late in your career is a risk,” Reel said of Jones, who was previously a four-year starter at Saint Xavier University. “But he’s been open to advice. He’s worked on different pitches, especially the changeup, [and worked on] lengthening his arsenal and pitchability. It’s hard to do that [so late in one’s career].”
Let’s Play Two
Following the 12-3 blowout in the opener, the Grenadiers and Bears returned the next day to conclude the series with a doubleheader. Much like the night before, the Grenadiers struck early as Clay Woeste singled before stealing second and third. Matt Monahan brought the speedy second baseman home on an RBI groundout, driving in his first run as a Grenadier.

In the third, Woeste and Monahan each singled and stole a base, followed by Tanksley’s walk, loading the bases for Scott. Like the previous night, Scott delivered on a single to left, plating a pair of runs.

The Bears got a run back in the top of the fourth after Noah Helton scored on an RBI groundout by Marushi, the only run they could muster against southpaw Trevor Reynolds. In the sixth, the Grenadiers got some insurance in the bat of center fielder Santrel Farmer, who belted a solo shot to left on the frame’s first pitch to increase the lead to 4-1.

“All that was going through my mind was trust in the man upstairs and believe in myself,” Farmer said. “When hitting that home run, I was just thinking low line-drive, not trying to do too much with a pitch I could handle and it just happened to go over the fence.”

After four innings of one-run ball, Reynolds gave way to the bullpen, where Connor Burnett, Hunter Kloke, and Jacob Frankel each threw a scoreless frame, combining to allow only one hit and two walks to seal the contest at 4-1. Frankel earned his first save on the year in the effort.

“Trevor looked great, he was throwing strike after strike,” Reel said. “Didn’t [strike out any] guys, but he will later in the year. The big thing is just getting some momentum and confidence.”

In the nightcap, the Grenadier offense struck again when Tanksley reached on a fielder’s choice, allowing Woeste to score after Bears’ catcher Eduardo Bello bobbled the ball. With two runners on, Scott delivered once more, drilling a three-run blast to left to give the Grenadiers a quick 4-0 advantage. They followed that in the second when Woeste, Romero, and Tanksley each hit doubles, scoring the former two.

In the third, the Bears answered after Tyler Freas double to left-center before being driven in by Jared Kirkman. In the bottom half, the Grenadiers’ response started in a similar fashion when Brandon Boxer doubled before advancing to third on a DeCello single. John Ullom, pinch-hitting for Farmer, knocked a single into right to allow Boxer to score to make the score 7-1.

That’s all the offense the Grenadiers needed, as Drew Hensley, Cade Reynolds, Connor Kelly, and Brenden Bube combined for seven innings, allowing only one run on eight hits while striking out 10 Bears.

For the series, Scott went 8-for-11 with a team-leading eight RBI, while Farmer is batting .571 with three stolen bases. The Grenadiers ran wild on the base paths, swiping 17 bags in the series, led by Woeste’s five. The Grenadier pitching staff was efficient with their pitch command, surrendering only eight walks while striking out 23 batters.

“I’m really proud of the guys for being on such a short timetable as far as getting prepared,” Reel said. “We didn’t have five or six weeks of Spring Training and bullpens, we were just piecing things together.”

The Grenadiers return to action on Friday, Feb. 12, when they travel to Cartersville, Ga. to take on #5 Tennessee Wesleyan, who won the NAIA World Series in 2019. Friday’s contest is a doubleheader beginning at noon, followed by a single game on Saturday, which starts at 2 p.m.