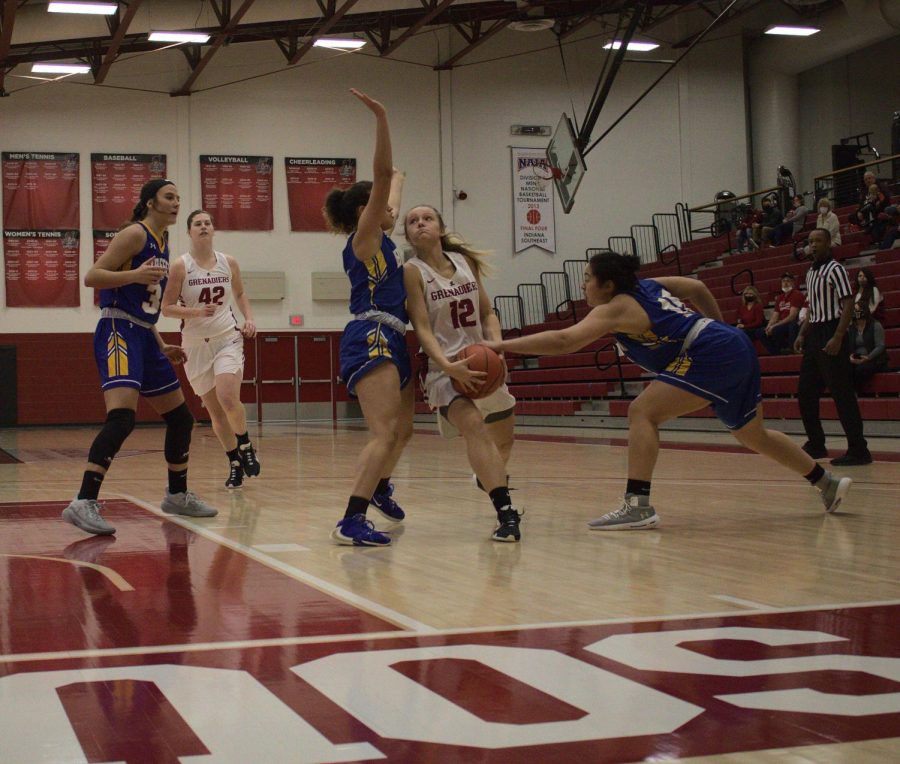 Junior Lauren Lambdin attempts to maneuver around Brescia's Alecea Homer and Cassidy Moss during the Grenadiers' senior day matchup with the Bearcats on Feb. 13.

While Kentuckiana was beset by frozen conditions and the threat of a large snowstorm in the following days on the horizon, the Activities Building was an epicenter of warmth for a number of reasons on Saturday, Feb. 13. Prior to the IU Southeast Women’s Basketball team playing host to RSC rival Brescia, the Grenadiers showed early Valentine’s love to their lone senior, guard Josie Woods, for four years of contributions to the program on Senior Day.

Once the festivities came to pass, the Grenadiers utilized a scorching defense against the Bearcats, forcing 22 turnovers en route to an 86-73 victory to warm the hearts of the limited number of Grenadier faithful in attendance.

The contest began on a slow note for the Grenadiers, especially for the guard tandem of junior Lauren Lambdin and sophomore Emmy Ralph. The duo struggled initially, going 2-for-8 while also each committing a pair of turnovers. Woods and sophomore Kirstie Henn helped to keep the Grenadiers from falling into too deep of a deficit, combining to score nine.

“[Brescia] was beating us off the dribble, they were getting by us and we were turning the ball over,” Head Coach Robin Farris said of the shaky start. “I wish we were better man-to-man defenders, and sometimes we are, but we weren’t tonight.”

The Bearcats utilized the offense of Alecea Homer, who led the Bearcats with six points in the period, their lead growing as large as 17-11. A pair of free throws from Woods cut the deficit to 17-13 to end the first quarter.

The second quarter briefly started with the Bearcats extending their lead when Paige Vanzant converted on a three-point play. A putback by freshman Alex Maher and triple from sophomore Jacy Hughes sparked an 11-4 run, tying the game at 26 before the Grenadiers took the lead for good on a triple from Maher.

The Grenadiers also relied on a change to their defensive scheme to take the lead, changing from man-to-man to a 2-3 zone defense, capitalizing on the Bearcats’ lack of perimeter shooting. They also forced 10 turnovers with their new defensive strategy, helping to fuel their way to a 37-30 halftime advantage.

“We switched to 2-3 zone and that seemed to work because they don’t have a lot of good shooters, so I think that was effective,” Farris said. “Offensively, I thought we stopped turning the ball over a little bit and got a little more patient.”

The Bearcats made an effort to regain the lead in the third quarter when Hallie Fisher notched five points to cut the deficit to 42-37. While only committing six additional miscues in the period, the Bearcats could not match the Grenadiers on offense, as Ralph, Lambdin, and freshman Collette Nice each led the way with eight points. On defense, the Grenadiers held the Bearcats to a frigid 29% shooting in the period, allowing only one three-pointer in seven attempts. Nice, Woods, Lambdin, and Ralph played the full 10 minutes in the quarter, which ended with a 66-47 Grenadier advantage.

The final period was hardly any different from the third, with the Grenadiers expanding their lead as much as 81-60. Despite a pair of free throws from Fisher and a triple from Sarah Shadowen in the final seconds, all it did was shrink the deficit to a final of 86-73.

Ralph led the way for the Grenadiers on both sides of the ball, scoring a game-high 19 points while notching four steals. Henn followed with 17 points and eight rebounds. Lambdin, who leads the Grenadiers with 19.7 points per game this season, struggled offensively. While chipping in 16 points, it came despite a paltry 4-for-18 shooting from the field.

“I think she was forcing things because she scored 32 the other night at Alice Lloyd,” Farris said of Lambdin’s struggles. “She was a little impatient, but I think she [was also] tired tonight as well.”

Maher had a strong night off the bench, chipping in 13 points and seven rebounds. Nice recorded all eight of her points scored in the third quarter to go with nine rebounds and four blocks. Woods had a solid night on her Senior Day, contributing seven points and six rebounds.

Hailey Kendall led the Bearcats with 14 points, while Fisher and Homer contributed 11 and 10 points respectively. The loss was the Bearcats’ 15th, dropping their season record to 1-15.

The victory for the Grenadiers puts them back over the .500 mark, now 5-4 on the year. The win just before Valentine’s Day was even sweeter for Woods, who has had the misfortune of playing her senior season in the midst of the COVID-19 pandemic. As the number of cases in Indiana skyrocketed in late 2020, the Grenadiers were forced to take a long hiatus after losing to Saint Francis on Nov. 13. Since returning from the nearly four-month layoff in February, the Grenadiers have gone 2-2 as they try to wrap up what has been a bizarre season and try to give Woods a more traditional sendoff.

“It’s been a little hard for us because we’ve had such long breaks in our season and a lot of our players getting COVID, so it’s kind of hard to get in our groove,” Woods said. “But since we started up again, getting to actually play on the court was more fun than having to practice all day.”

In nine contests so far this year, Woods leads the Grenadiers with 16 steals, is second in rebounds per game (5.8), total rebounds (52), and assists (15), and fourth in scoring with 6.8 points per game. For her career to this point, the Mercy Academy product has scored 382 points and pulled down 252 boards. Despite the low career numbers, Woods has stepped up as a leader both on the court and in the locker room.

“First of all, she’s a really fantastic human being, a great citizen and team player,” Farris said of his lone senior. “I never hear anything negative out of her. She [doesn’t have] huge numbers, but she does a lot of subtle things.”

The Grenadiers (5-4) conclude the regular season on Saturday, Feb. 20, when they host rival Midway (12-7) as the day game of a doubleheader. Tipoff for this contest is set for 1 p.m., with the Men’s Basketball team set to compete against the Eagles in the nightcap.
Brescia (1-15): Hailey Kendall 14, Hallie Fisher 11, Alecea Homer 10, Courtney Peyton 8, Madelyn Lyon 8, Paige Vanzant 6, Lindsey Peyton 5, Sarah Shadowen 5, Ashli Sheldon 4, Cassidy Moss 2