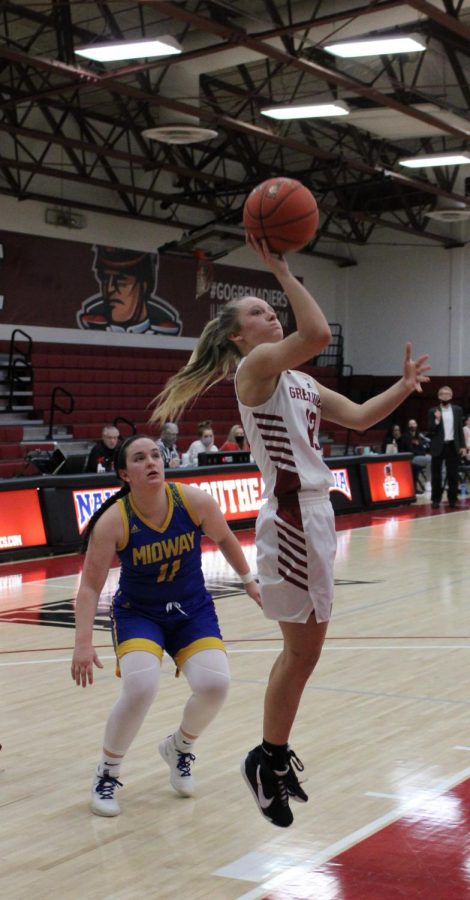 Guard Lauren Lambdin puts up a floater after getting around Midway's Kindall Talley on Feb. 20.

Despite only playing 10 games in the regular season, the IU Southeast Women’s Basketball program had to feel confident coming into the River States Conference Tournament. Not only did they draw a first-round bye, allowing them to advance to the RSC Quarterfinals, but they had the luxury of playing rival Brescia. The Bearcats had won just a single game in the seventeen contests they played during the regular season. Of those 16 losses, two came at the hands of the Grenadiers.

As is typically the case come postseason time, records meant nothing on Wednesday, Feb. 24 in Owensboro. Both squads played with the season on the line, eventually needing to go beyond regulation to decide the outcome. In the end, the third time was the charm for the Bearcats as they upset the Grenadiers 68-62.

“It was a disappointing loss,” Head Coach Robin Farris said. “We couldn’t get enough defensive stops down the stretch and we only needed one more in regulation.”

The first quarter started with the Grenadier defense stuttering against the Bearcats, who scored the first nine points of the contest as they jumped out of the gate on a 15-4 run. Leading the way for the Bearcats offensively was Cassidy Moss with eight points. The Grenadier offense took time to get going, over three and a half minutes worth of time before getting their first bucket. Once the Grenadiers got into the scoring column, they immediately began closing the gap, riding the hot shooting of guard Lauren Lambdin, who matched Moss with eight points of her own, six of which came on three-pointers. Lambdin tried for a third triple at the buzzer but was off the mark, the first period ending with a 19-14 Bearcats lead.

After Moss hit a three to open the second quarter, the game became one of defense, as neither squad scored for almost four minutes. That scoreless streak for either side ended when guard Jacy Hughes knocked down a triple, helping to spark a 17-2 run to give the Grenadiers the lead. A pair of free throws by Lambdin at the end of the period allowed the Grenadiers to retreat to the locker room with a 31-24 advantage.

“It was a tough game from the jump,” Lambdin said. “Brescia came out firing and we had to collect ourselves quickly and figure something out.”

The third quarter was mostly a back-and-forth affair despite the Grenadiers maintaining the lead throughout the period. Farris was confident in his starting five, allowing them to play the entire 10 minute quarter without substituting. The Bearcats, meanwhile, utilized almost their entire roster to try and gain an advantage, cutting the Grenadier lead to 33-32 on a basket by Courtney Peyton. Lambdin kept the Grenadiers ahead with six points in the period, but a last-second field goal by Lindsey Peyton cut the Grenadier lead to 41-36 going into the final quarter.

The Grenadiers kept the lead throughout most of the fourth quarter yet could never break away from the Bearcats’ persistent offense. That persistence paid off with a 1:43 left to play when Moss hit a triple to tie the game at 51. After an Emmy Ralph basket to give the Grenadiers a 53-51, the Bearcats’ Ashli Sheldon and Lambdin exchanged triples. Sheldon tied the game once more on a pair of free throws before Lambdin hit a field goal with three seconds left, leaving a microscopic sliver of hope for the Bearcats.

That sliver was all the Bearcats needed as Moss knocked down a shot in the paint just before the buzzer, sending the close contest into overtime. The Grenadiers jumped out to a 62-59 lead in the extra period courtesy of buckets from Ralph and Kirstie Henn. The Bearcats then summoned one last run, scoring the final nine points, led by Hailey Kendall’s five points to end the Grenadiers’ season in dramatic fashion.

“We missed some good looks that we had at the basket and we only needed one to go in,” Farris said. “We were 4-for-20 from the three-point line which really hurt. They also had two more three-pointers [than us], which is a six-point difference.”

Moss led the way for the Bearcats with 22 points, six rebounds and three assists, a big improvement over her last encounter with the Grenadiers, when she managed only two points. Following Moss’ efforts was Kendall with a double-double, notching 14 points and 11 rebounds. The victory was just the Bearcats’ second of the year as they advanced to the RSC semifinals on Sat. Feb. 27 against Asbury.

Lambdin led the Grenadiers with a game-high 25 points, three rebounds and two steals. Ralph followed with 16 points, having played all 40 minutes of regulation as well as overtime. Senior Josie Woods concluded her final collegiate contest with six points and seven rebounds.

With the loss, the Grenadiers close the book on what has been arguably the most peculiar season for any team across the country due to the COVID-19 pandemic. For many on the Grenadiers, the sadness that comes with a postseason loss also comes with a bit of relief and satisfaction of getting through the season despite the pandemic.

“We were grateful to be able to play the number of games we got in,” Lambdin said. “There was a time where we were scared that we weren’t going to play any so we just consider ourselves lucky to have been able to play at all.”

The end of the season also marks the end of the road for a pair of players in Woods and Henn. Despite NAIA legislation passed earlier in the 2020-2021 season, granting all fall and winter sports athletes an extra year of eligibility, Woods elected to end her collegiate career following the loss.

Woods finishes her career with 400 points, 269 rebounds, 97 assists and 96 steals. This season, the Mercy Academy product led the Grenadiers with 18 steals, second in total rebounds (69) and rebounds per game (6.3), and fourth in scoring (7.2).

“I’m in nursing school and have been working very hard to finish and be successful in my academic career,” Woods said.  “I’ve accepted a registered nursing position and will be starting in July; therefore, I will not be able to return next season.”

While classified on the official roster as a sophomore, Henn is nearing the end of her time in college as well. The 5’9 wing, who transferred from Kentucky Wesleyan before the 2018-19 season, redshirted during the 2019-20 campaign due to personal reasons.

Despite a year-long hiatus, Henn returned in the role of the Grenadiers’ third-highest scorer this past season, averaging 12.2 points per game. She was also tied for second on the Grenadiers with 16 steals and third in total rebounds (46) and rebounds per game (5.1).

“Many people know I sat out last season due to having a baby, so coming back an extra year was never something I truly planned in the first place,” Henn said. “It was an amazing opportunity I was given, and I had the support from home to play again. Now that the season has ended, my focus is graduating and providing for my family. I have a one-year-old that I must put first, and college basketball is not in the plan anymore.”

With the loss of Woods and Henn next season, the Grenadiers will have some questions to answer on both sides of the ball. The Grenadiers averaged 71.82% shooting per game, while their defense allowed 72 points per game. Farris said that his primary objective in the offseason was to acquire shooters and athletic forwards to replace Woods and Henn, but the Grenadiers’ yearly financial situation means such a task is easier said than done.

“[Recruiting] will not be easy because other schools with a larger scholarship budget like shooters and big athletic forwards as well,” Farris said. “Overall, I guess we were fortunate to play eleven games, but three two-week shutdowns combined with the mandated one-month IU shutdown really made it a challenging year.”
IUS (5-6): Lauren Lambdin 25, Emmy Ralph 16, Kirstie Henn 8, Josie Woods 6, Jacy Hughes 3, Collette Nice 2, Alex Maher 2