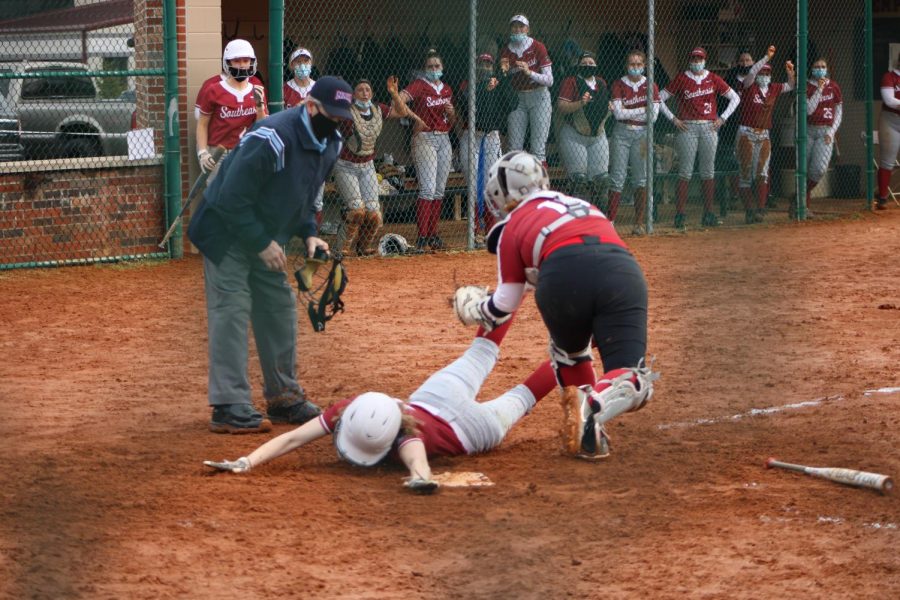 Centerfielder Kaitlyn Flowers slides into home plate on a Macie Zink squeeze bunt, narrowly avoiding the tag to give the Grenadiers a 1-0 victory over IU South Bend in Game 1 of a doubleheader on Feb. 27.

The IU Southeast Softball team had a dominant start to their season last week, starting with a two-game sweep of Alice Lloyd by scores of 12-1 and 13-0 in a non-conference doubleheader on Wednesday, Feb. 24. The Grenadiers followed that dominance two days later, sweeping Grace College in their home opener, shutting out the Lancers 8-0 and 2-0 respectively.

Starting the season with a perfect 4-0 record, the Grenadiers put that early-season dominance to the test against IU South Bend in a doubleheader on Saturday, Feb. 27. The pair of contests was a tale of two performances for the Grenadier offense, winning by scores of 1-0 and 9-1.

“They’re just driven, and they pull for the next person in line,” Head Coach Joe Witten said of his squad’s hot start. “They don’t care who plays, and they’re ready when called upon. They’re just a really tight-knit group.”
Pitcher’s Duel
The day game proved to be a pitcher’s duel as Grenadier ace Hannah Ogg and Lancers’ right-hander Becca Stevens exchanged zeros on the scoreboard through eight innings. The Grenadiers’ best chance to take the lead came in the bottom of the fifth when catcher Reecie Gilliam reached on a dropped popup, followed by Brooklyn Gibbs being hit by a pitch. Despite runners at first and second with nobody out, Stevens persevered by forcing Dallas Henderson and Ellie Jackman to fly out before making Kelsey Warman ground a pitch back to the pitcher’s circle to escape potential damage.

Despite Ogg’s dominance in the circle, striking out 10 while not issuing a walk, she was relieved by Gibbs once the contest reached extra innings. Gibbs ran into trouble, allowing a single to Savannah Schmitz to put a pair of runners on alongside Nicole Grazioli, who started the frame on second base per extra-inning rules. Both runners advanced on a Brittney Johnstone sacrifice bunt, putting runners at second and third with two outs. Gibbs tightroped out of danger upon striking out Brittany VanderBrink to conclude the frame, ending the threat.

“I just needed to do what I do and let my defense back me up,” Gibbs said of escaping the late jam. “I just had to make sure I was painting the corners [of the strike zone] because we played a great team in South Bend, and if you leave something down the middle of the plate, they’re just gonna smash it.”

In the bottom of the ninth, left fielder Madeline laid down a bunt in hopes of advancing runner Kaitlyn Flowers to third with one out. Instead, she managed to beat the throw to first, putting runners at the corners with nobody out. Freshman Macie Zink delivered the winning hit, laying down a perfect squeeze bunt to bring home Flowers, who narrowly avoided being tagged to give the Grenadiers the 1-0 victory.
Have Mercy
In the nightcap, the Grenadier offense wasted little time waking up despite recording two quick outs in the bottom of the first. Consecutive errors allowed Ashtyn Sharp and Jackman to reach base, the former also scoring as a result. Flowers and Zink followed with back-to-back doubles to drive in two more runs.

The Grenadiers picked up where they left off in the second courtesy of back-to-back doubles from Gibbs and Maggie Lubbehusen, driving in an additional pair of runs to give the Grenadiers a 5-0 advantage.

Despite giving up a run in the top of the fourth on a Haylie Williamson groundout, the Grenadiers responded in the bottom half. After Gibbs and Sharp began the frame with consecutive hits, Henderson ripped a double to right to bring both runners home and extend the lead to 7-1.

In the fifth, Probus led off with a single and advanced to second on a passed ball before Ysa Fox drew a walk. Another passed ball and a walk to Sharp loaded the bases for the lefty-swinging Henderson, ripping her second double of the contest. The hit scored two more, bringing the Grenadiers to an eight-run lead in the frame, earning the victory via the NAIA Softball Mercy Rule.

Gibbs had a strong showing despite throwing two innings in the day game, allowing only one run on three hits while walking three. Henderson, who pinch-hit for Lubbehusen, went 2-2 with four RBI. Between the two contests, pitching was the driving force, as Ogg and Gibbs combined to allow only one run on nine hits while striking out 14 batters. The Grenadiers also outhit the Lancers 17-9.

When not in the circle, where she’s 4-0 and has not allowed an earned run in 18 innings, Gibbs is moonlighting as a force at the plate for the Grenadiers. So far this season, Gibbs is 11-for-16 with a team-high four home runs and six RBI. Three of those big flies came in consecutive at-bats during the nightcap of the Grenadiers’ opener at Alice Lloyd.

“I’ve just been relaxed, taking deep breaths and not thinking too much about it,” Gibbs said of her hot start. “I’m just trying to take my time and not rush things because it’s such a fast game.”

The Saturday sweep lifts the Grenadiers to 6-0 on the year, a hot start that has the potential to match the historic 19-2-1 campaign the Grenadiers turned in a year ago before being shut down due to the COVID-19 pandemic.

“It’s been very rewarding to get back on the field because it’s been such a long duration and change in the team’s normal routine,” Witten said. “For them to get to rejoice and play the game they love, I’m just proud of every single one of them because it’s a tough time to be a college student.”

The Grenadiers return to action on Wednesday, March 3, when they welcome #5 Marian University for a midweek doubleheader. First pitch for the day game is scheduled for 2 p.m.