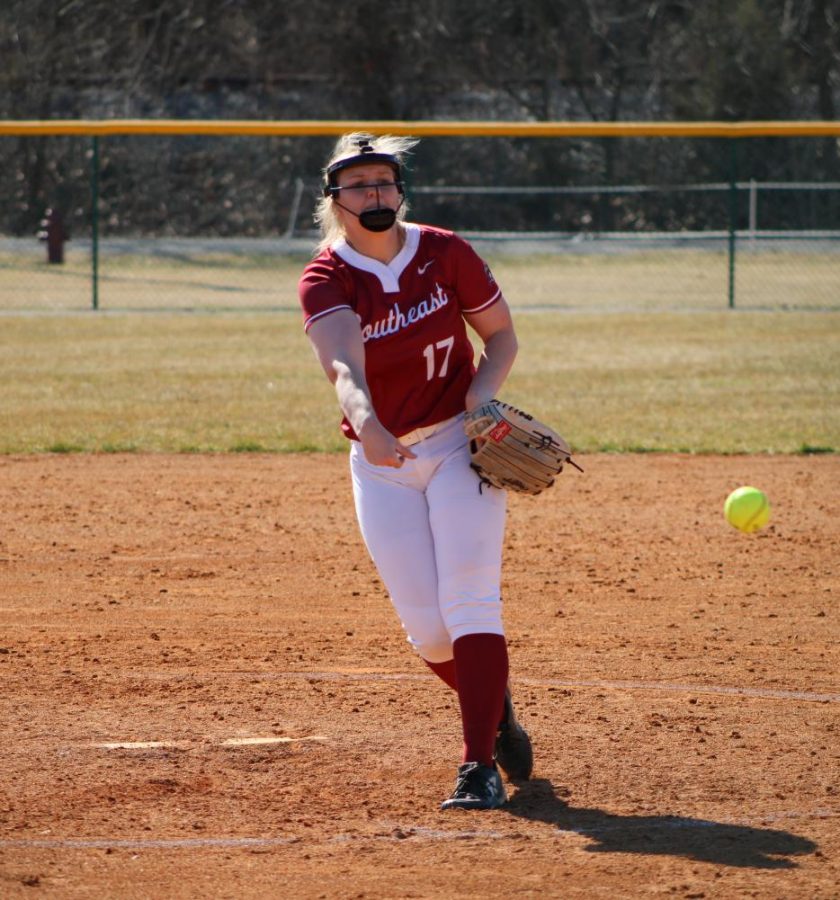 Grenadier pitcher Hannah Ogg fires a strike in game one of a doubleheader against #5 Marian University on March 3. Ogg appeared in both contests, pitching 10 innings while allowing three runs on eight hits.

The IU Southeast Softball team had a strong start to the season, winning their first six games against Alice Lloyd, Grace College, and IU South Bend. During that span, the #24 Grenadiers were an offensive juggernaut, outscoring opponents 45-2 while only one of their first six contests extended past the fifth inning.

Despite the strong start, the Grenadiers faced their first true test of the year on Wednesday, March 3, when they welcomed #5 Marian University to Koetter Sports Complex for a midweek doubleheader. The two programs share recent history, having met twice in the 2019 NAIA Opening Round.

In the first meeting, the Grenadiers held a 1-0 lead before the #2 Knights scored the tying run on a wild pitch. The matchup lasted through 14 innings before the Knights won on a walk-off single. The two met again later on in the tournament, with the Knights winning that matchup 5-2 to end the Grenadiers’ season.

Fast forward two years later, with an almost completely different roster, the Grenadiers looked to exact revenge on the Knights.

“In 2019, [Marian] was 49-0 in the regular season,” Head Coach Joe Witten said. “We were lucky enough to draw them in the first round and take them to 14 innings because they don’t make many mistakes.”

The Grenadiers jumped on Knights starter Sydney Wilson quickly in the bottom of the first when Brooklyn Gibbs reached on a walk, followed by a one-out single from Dallas Henderson. Kelsey Warman drew the second free pass of the inning to load the bases for Ellie Jackman and Madeline Probus, knocking back-to-back RBI singles up the middle.

A pair of true freshmen added to the early assault as Macie Zink brought home another run by being hit by a pitch with the bases loaded, followed by an Erin Templeman single to right to score Jackman and Probus. Gibbs capped off the scoring by plating Zink on a sacrifice fly, giving the Grenadiers an early 6-0 advantage before the inning concluded.

That was all the offense the Grenadiers needed for starter Hannah Ogg, who faced little trouble from the Knights for the entire contest. The Knights’ biggest threat was in the top of the fourth when Kassidi Cadle led off with a double, followed by Shelbie Stotts reaching on a fielding error by catcher Reecie Gilliam. With Cadle at third, Stotts broke for second base, drawing the infield’s attention long enough to allow Cadle to score.

The lone run in the fourth was all Ogg would allow for the contest, giving up only six hits over seven strong innings for the complete-game victory.

“I think this win will really boost our confidence for the rest of the season,” Ogg said. “Even though [Marian]’s the #5 team in the nation, we came in with the same intensity that we would any other game despite our intensity was lacking in the second game.”

In the nightcap, the Knights’ bid for revenge began immediately in the top of the first when Savannah Harweger led off with a single before advancing to third on two consecutive passed balls. Cadle then hit a groundball to second, allowing Harweger to score.

The Grenadiers answered in the bottom of the third when Gibbs drew a two-out walk and stole second. Ashtyn Sharp pulled through with an RBI single to tie the contest.

The game wasn’t tied for long next inning when Mady Foster led off with a bunt single, followed by a Lanie Horen single to left. Abbi Wirey then gave the Knights the lead for good as she hit a single to deep right-center to score Foster. Harweger followed with a one-out sacrifice fly to plate Horen before sent a deep drive to the left-field wall, driving in Wirey on an RBI triple, giving the Knights a 4-1 lead.

Those four runs were the first earned runs allowed this season by Gibbs, who was relieved by Ogg in the fifth inning. Despite making it through the frame, Ogg ran into trouble in the sixth when Harweger reached on a two-out single, advancing to third on a passed ball and wild pitch. Calde followed with a walk, and stolen base before hit a two-run single to center, extending the Knights’ advantage to 6-1.

The Grenadiers made an effort to rally in the bottom of the seventh when Warman led off with a single to left-center, only the third hit allowed by Knights starter Jaylah Guilliam. Guilliam responded by retiring Templeman, Ginger Funk, and Natalie Schapker to cap off the complete-game victory.

“We just couldn’t pull our hits together even though we got rolling in the first inning of the first game,” Probus said. “I think we could’ve beaten them twice, but they played a better game in the second game; that’s just how softball goes sometimes.”

Along with driving in the Grenadiers’ only run of the contest, Sharp notched two of the three hits allowed by Guilliam. Ogg pitched 10 innings between the two games, allowing three runs, two of which were earned.

“It’s special because you live to play against some of the best teams in the nation,” Witten said. “Overall, for these first eight games of our evaluation, we’re very satisfied with where the girls are.”

The Grenadiers (7-1) continue the homestand with a four-game weekend slate, first hosting Sienna Heights for a doubleheader on Saturday, March 6, beginning at 1 p.m. The action continues the following day as the Grenadiers host Saint Francis for a twin billing starting at noon.