While the administration aims for inclusion, some students feel spring commencement leaves much to be desired 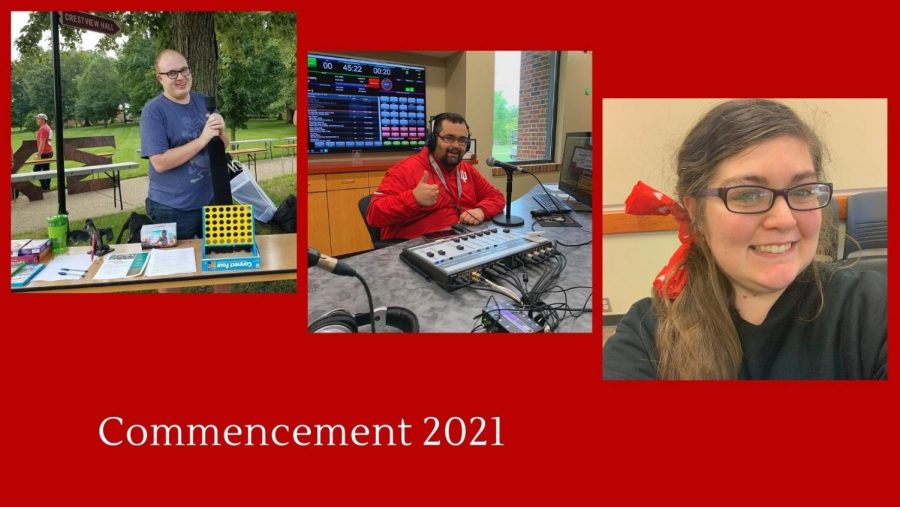 Horizon Radio’s campus office is empty, not radiating the almost constant bustle that it might have a year ago. On-air personalities no longer wave to you as you pass by, and former radio manager Matt McClellan no longer hands out candy by the door in his trademark sea captain’s cap and “stud muffin” t-shirt for Valentine’s Day.

McClellan still has a solid following of IU alumni and current students, even after graduating with the class of 2020 with a communications degree as the COVID-19 pandemic reached its peak. With his corny sense of humor and love of obscure historical and pop culture facts, he manages to always be a sunny point-of-view for his peers, even throughout the past year’s frustrations.

“I was volunteering at a school and had prospects lined up for better employment, then when the pandemic hit, I lost both,” McClellan said. “Avoiding negativity has been pretty hard, but I’m trying to be optimistic.”

When IU Southeast Chancellor Ray Wallace announced a tentative in-person commencement for graduates from late 2019 all the way to the summer of 2021, it was a bit of a shock that students like McClellan, who was very active in the IUS community, weren’t planning on attending.

In a post on Facebook, McClellan wished well to other alumni who had been holding out for an in-person ceremony, but declined the opportunity, saying he was content with the way he “rode off into the sunset.” While far from an angry rant, it definitely echoed the way some other students were feeling, especially given the positive to negative reaction ratio.

“I know that opportunity had to be put on hold, but it feels like a muddling of achievements,” McClellan said. “Since it’s graduates only, it seems weird that they’d want to combine the classes if they are concerned about space.”

A Piece of Paper Without Guarantee

While McClellan sits firmly in the middle of the road on the issue and even says he might reconsider if asked to be a commencement speaker, other students are less than quiet about their frustration with a student-only mixed-class commencement.

History senior Devin Burden has, like McClellan, been a very active member of campus life and an influence on the college careers of quite a few students during his time as president of the IUS Gamers Society, an organization founded to give students a place to blow off steam and find new friends through tabletop and online gaming.

However, due to COVID-19 and the chilling effects of pandemic restrictions on student meet-ups and extracurriculars, the organization was forced to disband, leaving those involved without many of the connections they once had.

Unlike McClellan, Burden finds it much harder to be optimistic, especially after what he feels was complete destruction of his college experience.

“The community that was once there, that once pushed me to succeed is now gone with COVID and the in-place restrictions,” Burden said. “The friend groups I fostered and maintained throughout my experience have all but disintegrated.”

Burden, like a few other students, sees very little point in attending any in-person ceremony that fails to include graduates’ families and does not allow graduates to celebrate their hard-fought victories together in groups like they might in past years.

After having to nearly drop out due to a pandemic instigated family financial crisis, Burden has had to work full-time to keep his family afloat while his degree has been indefinitely put on hold. Now, a year after he would have graduated if not for the virus, he is finally finishing his senior seminar, the only class he was unable to complete before the pandemic set in.

“I thought it would have been a lot easier. It would have been hard at first and then got easier as I became more familiar in my field, refining my technique and methods,” Burden said. “My skills and abilities in writing assignments have definitely improved but I feel they are pointless now in a world where I am working full time just to help support my family.”

As graduation and commencement draw near, Burden seems to feel more and more like he is only finishing out of obligation.

“Earning my degree now feels like tedium, an effort to not waste money or 4 years of effort for a piece of paper that does not guarantee anything in this new world I live in thanks to a rampant disease and the changing lifestyle it has created,” Burden said.

Holding on to Hope and Pride

While McClellan and Burden speak for a portion of students who still feel disenfranchised by pandemic-related slights and don’t see the upcoming commencement as particularly necessary or even adequate, some students feel like an attempt at normalcy is better than nothing.

After a graduation that felt “sad” and that “robbed” her of the “relieving feeling” of an in-person commencement, graduate student and IUS alumna Taylor Lowe felt like her college career had ended on a  “twist in a movie everyone could see coming” that “turned out anticlimactic.” However, she soldiered on with her applications to grad school and moved on with her education.

Now, with a make-up commencement in sight, Lowe says she’ll absolutely go if only to turn in her cap and gown. For Lowe, unlike McClellan, the real draw for commencement is closure.

“I struggled in my last semester, due to taking six classes and wanting to graduate on time, but I’d still like that validation, to be addressed by name and walk along a stage,” Lowe said. “It was the personalness that was missing that needed to be there.”

Not only does she feel that this might, in some way make up for the ceremony she never had, one she compared to being a bride preparing for a wedding that never happened, but she feels that this experience is important for all seniors and graduates to at least have some feeling of personhood as they finish their undergraduate careers.

After missing out on the validation and pride that she always thought she’d feel at her own commencement, she urges everyone, even those as disenfranchised as Burden, to at least try to attend when they can.

“I think commencements are special events that if you have the chance to go, please go,” Lowe said. “You shouldn’t have to miss out on an opportunity like that.”