The hunt for new SGA vice president is over 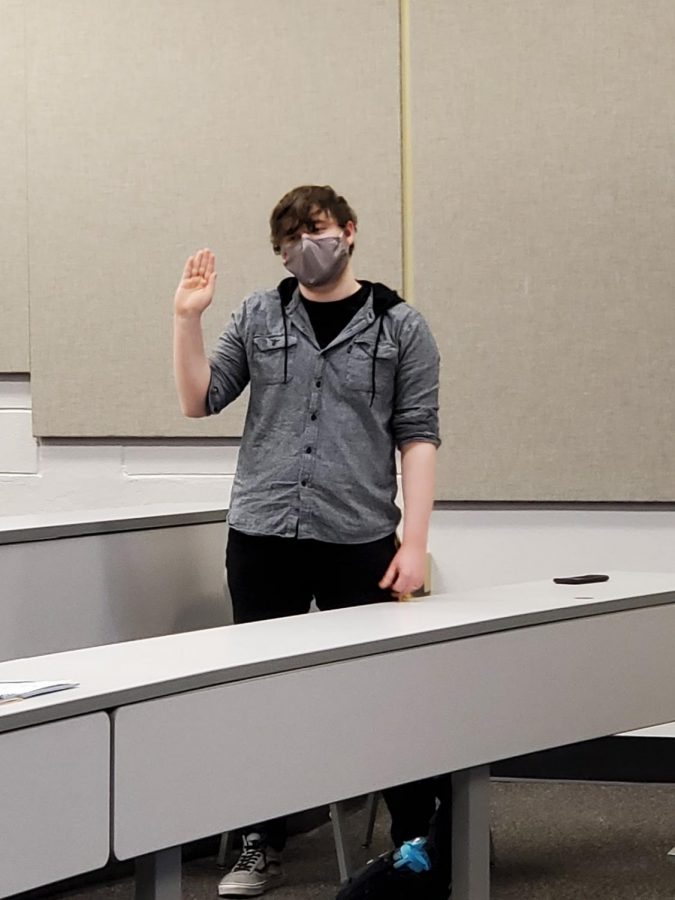 Senior political science major Evan Hunter raises his right hand as he is sworn in as the new SGA vice president during a meeting on March 5.

The IU Southeast Student Government Association had seen some administrative turnover to its highest positions since the end of February, starting when vice president Rebecca Von Allmen was sworn in to succeed Kameo Costello as its next president. With the position of SGA president secured for the remainder of the school year, the organization now needed to hunt for a suitable candidate to fill the position Von Allmen left behind.

Typically when a vacancy in the vice presidency occurs, the senate chair would take over the position while the senate pro tempore replaces the previous senate chair. Such a normally mundane process was made difficult due to the thin ranks of SGA senators this semester. It was decided that in order to prevent the loss of more senators in the organization, the new vice president should come from outside of SGA.

Evan Hunter, a senior political science major and a leader of the IUS Student Alliance, was chosen by Von Allmen to be the next vice president when she announced the decision at a meeting on Friday, Feb. 26. The move was surprising since Hunter was not a current SGA member at the time and had no prior experience with the organization.

“It’s certainly exciting, [though] I didn’t have any student government or leadership experience when president Von Allmen approached me, so I was hesitant at first,” Hunter said. “I didn’t want to disappoint the student body because student government is important.”

The question of who would succeed Von Allmen as vice president became a topic of discussion shortly after she was elected president. She soon mentioned Hunter, whom she met two years ago while working together on a class project.

“He was very quiet at the time, but he offered a lot of ideas I wasn’t getting from anywhere else, and I’m eager to see the ideas he can bring to SGA,” Von Allmen said.

On Friday, March 5, the SGA began its weekly meeting with a motion to confirm Hunter’s appointment as the new SGA vice president, which was confirmed. Hunter was officially sworn in shortly thereafter, making his unprecedented ascension to the vice presidency official.

Hunter was honored to be offered the position and excited to begin his work in the organization. Hunter said even though he is a senior this year, he still wants to positively impact campus through SGA, which he noted had become relatively weak as of late.

Despite his inexperience and initial hesitance, Hunter is committing to doing everything he can to help serve the student body and get them through the final two months of the semester. He believes that in the absence of student government experience, he can instead rely on his time with other campus organizations to bring an innovative mindset and fresh ideas to SGA meetings.

“I had been participating in several groups on campus that I felt had given me some genuine experiences that could help me here,” Hunter said. “Even if I don’t have previous experiences in a student government, I have plenty of other experiences that make me being in SGA valuable.”