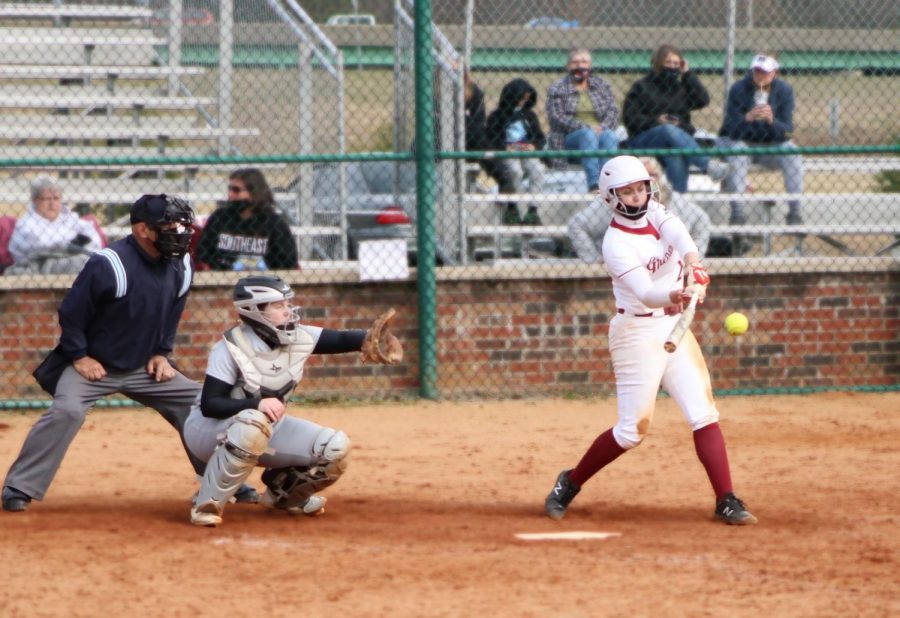 Ellie Jackman rips an RBI single to centerfield, driving in Ysa Fox. The hit completed a late Grenadier rally to take game two of a doubleheader against Huntington University on March 13.

After starting the season with a record of 11-1, the IU Southeast Softball team encountered a slight rough patch over the past week. The Grenadiers, who moved up to #22 in the latest NAIA Top 25 Poll, split midweek doubleheaders with the University of St. Francis (Ill.) and Judson University before being swept by St. Mary-of-the-Woods on Friday, March 12.

The cold stretch dropped the Grenadiers’ record to a still-respectable 13-5 when they welcomed Huntington University for a twin-billing on Saturday, March 13. The Grenadiers returned to their winning ways by taking the day game by a comfortable 8-1 margin but needed a late rally to secure the nightcap 8-7 to complete the sweep.

“Huntington always has such an offensive presence and their players really hit the ball well as a team,” Head Coach Joe Witten said. “We have such high-quality pitchers and they still put up a bunch of runs on us.”

The Grenadiers kicked off the day game scoring in the bottom of the second when Kelsey Warman worked a 3-2 count before launching a leadoff home run to left. Lindsey Nelson, Madeline Probus, and Ellie Jackman all kept the pressure on with three consecutive singles to load the bases before Erin Templeman scored Nelson on a fielder’s choice. A wild throw by the Foresters’ Abigail Reed on a would-be double play allowed Probus to score as well, giving the Grenadiers an early 3-0 lead.

The scoring continued in the bottom of the third when singles by Ashtyn Sharp and Warman put runners at first and third with one out. Sharp then scored thanks to smart baserunning after a Nelson single drew the Foresters’ attention. Probus followed with a sacrifice fly to plate Warman, extending the Grenadier advantage to 5-0.

Two more runs crossed the plate for the Grenadiers in the top of the fifth when Sharp welcomed Foresters’ reliever Adelyn Harsh with a leadoff double. Nelson and Probus followed with back-to-back RBI singles to push the Grenadier lead to 7-0.

The Foresters broke onto the scoreboard in the top of the sixth when Reed led off with a double before advancing to third on a Darby Minor bunt single. Reed then trotted home after Kiera Stacy popped out to left field to cut the deficit to 7-1.

The Grenadiers answered in the bottom half when Miranda Miller led off the frame after being hit by a pitch, followed by a Reecie Gilliam single. After stealing third, Macie Zink brought her home on a sacrifice fly to deep right-center, pushing the Grenadier edge to 8-1.

Hannah Ogg ensured that the Grenadier advantage stood tall, allowing only one run on six hits over seven strong innings to secure the day’s first victory.

“None of us once thought about losing because all we want to do is win,” Probus said. “We play with that one mindset that we’re going to win, so we all supported each other and knew we could come through.”

The Grenadier offense picked up where they left off in the nightcap when Zink was plunked to lead off the bottom of the first. Sharp followed with a deep single before Dallas Henderson grounded into an RBI fielder’s choice. Not satisfied with a single run, Warman took the first pitch she saw from Foresters’ starter Mica Allen over the right-field fence for her second longball of the day. Probus followed with an infield single before Jackman ripped an RBI double to deep right-center, giving the Grenadiers an early 4-0 advantage.

The Foresters’ responded quickly in the top of the second when Grenadier starter Gabby Mahoney gave up a leadoff single to Kaela Robey and walked Reed. After Minor bunted both runners into scoring position, Courtney Mason laced an RBI single followed by an RBI groundout from Kennedy Krull to cut the Grenadier edge to 4-2.

Another pair of runs crossed for the Foresters in the top of the fourth when Sophia Beachy and Hannah Shoupe ripped back-to-back two-out doubles. Breanna Hines followed by lacing a single to centerfield to tie the contest at four apiece.

The pair of two-run innings was only the beginning for the Foresters come the top of the fifth when Robey took a 2-2 from Mahoney over the left-field fence for a leadoff solo homer to take the lead. Minor followed with an RBI to bring home Reed, who reached on a double. After Mason reached on a walk and Krull moved both runners into scoring position on a sacrifice bunt, Witten pulled the plug on Mahoney in favor of Ogg, who allowed a Beachy sacrifice fly, pushing the Foresters’ advantage to 7-4.

Despite the late surge, the Grenadiers did not falter, evidenced by when Probus led off the bottom half with a triple before scoring on a single to center by Gilliam. That one-run frame was only the beginning, as the Grenadiers started the bottom of the sixth with consecutive singles from Sharp and Henderson. Warman drew a walk to load the bases before Nelson and Probus came through with consecutive sacrifice flies to tie the contest.

“It takes a lot to come back when you’re losing, so we did a really good job of putting the bats together and getting some hits,” Sharp said.

Jackman followed with an RBI single to score pinch-runner Ysa Fox, giving the Grenadiers the lead for good, 8-7.

Aside from Stacy reaching on a fielding error in the seventh, Ogg (9-1) faced minimal issues in the seventh to seal the sweep. The right-hander picked up both wins in the doubleheader, allowing three earned runs on seven hits across 9.2 innings of work.

Warman had a strong showing between the two games, going 3-for-4 with two home runs, three RBI, and three walks, while Sharp and Probus each collected five hits.

“Beating a team like that was really important to change the momentum and build confidence in some of our ladies who had been hitting around the .200 level lately,” Witten said. “The ladies put the charge into the ball, didn’t run into outs, and the defense made the plays.”

The Grenadiers continue their homestand beginning on Friday, March 19, when they welcome Indiana Tech for a two-day, four-game weekend series. Friday’s doubleheader begins at 1 p.m. while the following day’s twin-billing, which will be played down the road at Mt. Tabor Field in New Albany, starts at noon.