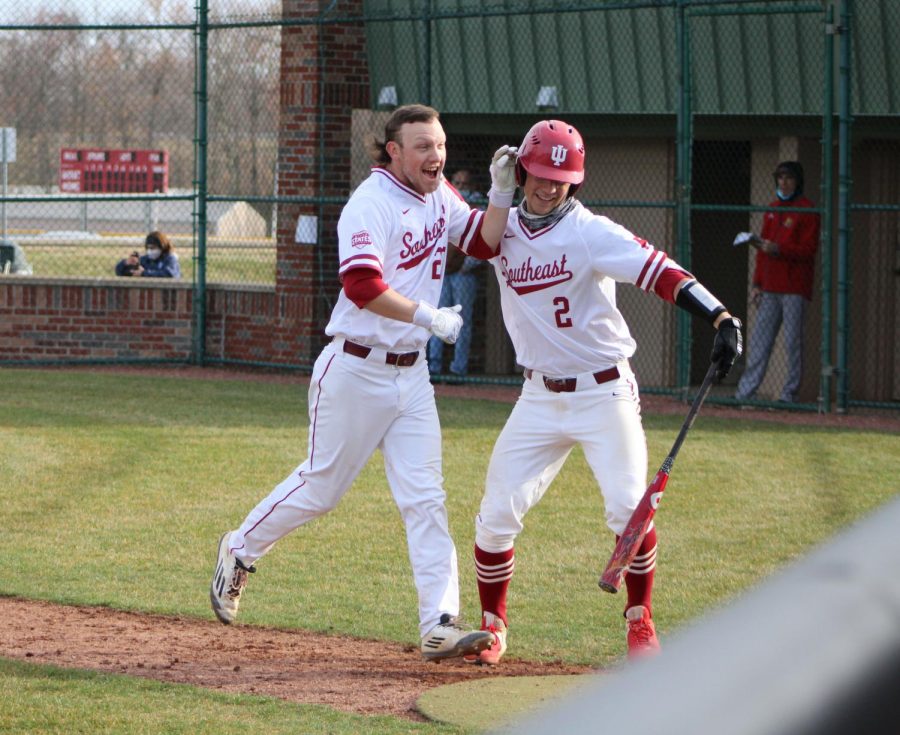 Drew Hensley (left) and Clay Woeste celebrate after the former hit an RBI bloop single, giving the Grenadiers a 1-0 lead during the day game of a doubleheader against IU Kokomo. The breakthrough hit eventually led to a 10-0 Grenadier victory.

After a strong 4-0 week highlighted by a sweep of River States Conference rival Rio Grande, the IU Southeast Baseball team started the past week with a close 7-6 loss to #8 University of the Cumberlands on Monday, March 8. Two days later, the #11 Grenadiers took advantage of both a season-best offensive output and a comedy of errors to rout Lindsey Wilson 33-15.

Coming into the weekend at 1-1, the Grenadiers faced one of their biggest tests of the season when they welcomed RSC rival IU Kokomo to Koetter Sports Complex for a pivotal three-game weekend series. Both squads entered the series 3-0 in conference play, potentially putting the RSC Regular-Season title on the line at an early point in league play.

The Cougars have made a name for themselves as one of the NAIA’s better programs despite playing in just their fourth season in program history, receiving votes in the NAIA Top 25. That mattered little to the Grenadiers, whose offense and pitching came through in all three contests, sweeping the series by scores of 10-0, 4-2, and 12-3.

“IU Kokomo is probably the best coached team in our conference,” Head Coach Ben Reel said. “They’re gonna test you in all areas, but I thought our guys did a good job because they know what’s at stake.”
Pitchers’ Duel and Gutsy Rally
The series’s opening game was originally scheduled for Friday, March 12, but was pushed back due to rain. The series instead began with a doubleheader the following day.

In the day game, the Grenadiers sent out their typical Friday-night starter in freshman right-hander Cade Reynolds while the Cougars countered with senior left-hander Owen Callaghan. From the moment the first pitch was thrown, both hurlers were locked in, preventing a single run from scoring through the first six innings.

“I was a catcher, so I love to see good pitching,” Reel said. “It was impressive a freshman go up against a senior in Callaghan and minimizes trouble like he did.”

The pitchers’ duel shifted in the Grenadiers’ favor in the bottom of the seventh when John Ullom made it to second after Masen Melton dropped an easy flyball. Having thrown 93 pitches to this point, Cougars’ skipper Matt Howard pulled Callaghan in favor of right-hander Renton Poole, who was previously a 28th round pick by the Texas Rangers in the 2018 MLB Draft.

Poole’s former draft status and hammering curveball mattered little to pinch-hitter Drew Hensley, who fought off multiple pitches before hitting a flyball that eventually dropped in shallow left-field, allowing Ullom to score and put the Grenadiers’ on the board first. Clay Woeste followed with an RBI to score pinch-runner Austin Wise, giving the Grenadiers’ a late 2-0 lead.

“What’s funny is that during his freshman year and we played Kokomo, I put Drew in to face Poole,” Reel said of Hensley’s pivotal at-bat. “On three pitches, Drew was back in the dugout.”

The two-run seventh was only the calm before the Grenadiers’ storm as Brody Tanksley began the bottom of the eighth by reaching on a misplayed groundball by Noah Hurlock. Marco Romero and Jake Scott followed with consecutive singles, the latter scoring courtesy-runner Andronico Recasas. Ian Taylor laced his second double of the contest to drive in Romero before Ullom cleared the bases with a two-run triple, extending the Grenadier edge to 6-0.

Wise brought Ullom home on an RBI single before a Woeste base hit put runners at first and third with only one out. The contest, originally scheduled for nine innings, ended prematurely when Matt Monahan took an 0-2 pitch from Connor Hurt over the right-field fence for a three-run home run, triggering the NAIA 10-run mercy rule and giving the Grenadiers a 10-0 victory.

“Around the fourth inning, I kind of lost it a little bit, but I came back still throwing good,” Reynolds said. “It was just another day at the office, really.”

Despite his heroics in the day game, Hensley did not have a great start when he took the mound for the nightcap. After Austin Weiler drew a two-out walk, Hurlock to a 1-0 pitch over the left-field fence for a two-run homer, giving the Cougars an early 2-0 advantage. The Grenadiers answered in the bottom half when Woeste led off with a single before advancing to second on a wild pitch and to third on a Monahan groundout. Tanksley then knocked a single to center, plating Woeste and cutting the Cougar lead in half, 2-1.

While only having one baserunner over the following two innings, the Grenadiers broke through in the top of the fourth when Tanksley led off with an infield single. After a Romero sacrifice bunt and a wild pitch advanced the courtesy runner Recasas to third, Scott reached on an RBI infield single to tie the contest at two apiece.

That lone run was just the beginning for the Grenadiers when Ullom led off the bottom of the fifth with a single. Woeste followed with a one-out walk before Monahan laced a single to right, scoring the go-ahead run in Ullom. A wild pitch followed to allow the speedy Woeste to score, pushing the Grenadier advantage to 4-2.

That was all the offense Hensley needed, rebounding from the two-run shot he surrendered in the first. The right-hander persevered through the ballgame despite the quality of his pitches throughout the night, pushing through six innings of two-run ball, allowing five hits, and walking two while striking out six.

“He didn’t have anything except a breaking ball for about two and a half innings; it was all just ‘here it is, hit it,'” Reel said of Hensley. “I was gonna hook him in the fourth or fifth, and he was like ‘No, I want them, I got this.’ He is one of the most competitive kids I’ve ever coached.”

Reliever Brenden Bube needed only seven pitches to retire the seventh, locking down the 4-2 victory while notching his first save of the season.

The two victories helped push the Grenadiers over the .500 mark for the first time since Feb. 21, when they came back to defeat Benedictine College 9-8 in the first of four contests played during the Cajun Collision. While the two contests were near opposites, Reel noted the one similarity between the two; the determination and grit his squad show to secure, at worst, a two out of three series victory.

“It was just a gutsy performance by the whole team,” Reel said. “We couldn’t get anything to happen, it was like trying to jam a square peg into a round who until we just beat that thing until it fits.”


Breaking Out the Brooms
With the doubleheader sweep secured, the Grenadiers returned to Koetter Sports Complex the following day looking to finish off the Cougars and sweep their second consecutive conference series.

The Grenadiers wasted no time taking the lead as Woeste led off the first with a walk before stealing second and third. After a pitch hit Tanksley, Romero brought Woeste home on a groundout to second. Scott and Ben Berenda followed with back-to-back RBI singles to give the Grenadiers an early 3-0 lead.

Not satisfied with just three runs, Ullom led off the second with a double before Tyler Mills moved him to third on a bunt. Woeste then sent a flyball to right-field, more than deep enough to score Ullom to push the Grenadier advantage to 4-0.

The Cougars were not deterred despite facing Grenadier ace Hunter Kloke as Jack Leverenz led off the top of the third with a double. After swiping third, Weiler grounded out to shortstop, allowing Leverenz to score and cut the Grenadier lead to 4-1.

The Grenadiers responded in the bottom of the fourth when Ullom worked a leadoff walk before stealing second. After Mills reached on a bunt single, Woeste again came through with an RBI single. Romero kept the inning alive with an RBI single of his own to score Woeste and extend the lead to 6-1.

“We executed when we had to, so I thought we did great,” Monahan said.

Brayden Hazelwood made the most of his first at-bat of the day with a leadoff pinch-hit single in the bottom of the sixth. Monahan followed with a single of his own before advancing to second on a throw to third base. With runners in scoring position and two outs, Romero came through once more with a single into centerfield to plate both runners, again extending the lead to 8-1.

After pitching four innings of one-run ball, Kloke was lifted for right-hander Lane Oesterling, who pitched two scoreless frames in the fifth and sixth. The second-year freshman ran into trouble in the seventh when Riley Garcynzki led off with a single. Leverenz followed with an RBI triple before coming home on a Weiler sacrifice fly, cutting the deficit to 8-3.

Considering a five-run lead too close, the Grenadiers rallied in the seventh, led off by a Berenda double before an Ethan Shaffer groundout moved him to third. After Ullom was hit by a pitch and Hazelwood reached on an error, Woeste and Monahan laced consecutive RBI singles bring home three more runs. After a pitch plunked Tanksley, Romero drew a bases-loaded walk, pushing the Grenadier advantage to a final of 12-3.

Oesterling pitched four innings of two-run ball in relief of the winning pitcher Kloke (2-1). Southpaw Gavin Knust followed with a flawless ninth inning to seal the game and the sweep.

The sweep was extra satisfying considering the hardship the Grenadiers had faced over the past few weeks regarding their roster. Their depth was tested courtesy of injuries to Daunte DeCello, Jared Jones, Derek Wagner, and Jacob Frankel, among others. Among these four, DeCello is expected to return to action later in the week.

“Our whole team’s been under a lot of stress with injuries,” Reel said. “We’re just trying to find our rhythm, and the guys did a good job.”

The numerous injuries have led to some newer Grenadiers receiving additional playing time, most notably Taylor. For the week, the State Fair Community College transfer batted .500 with a pair of RBI.

“I should not get beat [on pitches] anymore because my confidence is honestly through the roof right now,” Taylor said.

The Grenadiers return to action on Tuesday, March 16, when they host the University of Pikeville at 4 p.m. Their next conference series begins on Friday, March 19, when they travel to face Ohio Christian University beginning at 5 p.m.