College students are struggling amid the COVID-19 pandemic 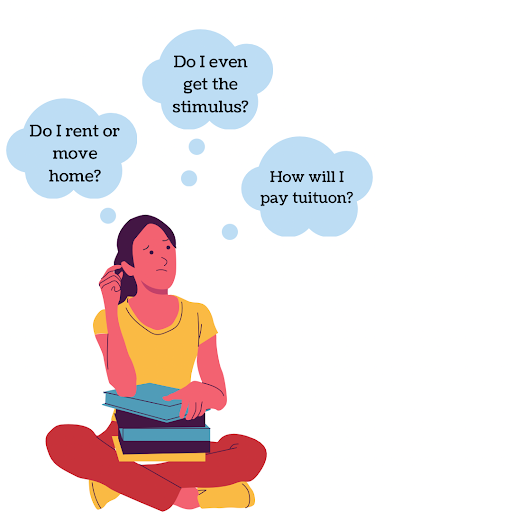 College students have been hit financially during the COVID-19 pandemic and some students have not received any of the stimulus money packages from the government.

70% of college students lost some form of income due to the COVID-19 pandemic, according to the University of California, Davis.

College students have remained one of the most vulnerable groups during the pandemic. They have lost income, had their living arrangements disrupted, and were one of the major groups who were not eligible to directly receive a stimulus package.

If a college student is going to school full time, they may still be claimed as a dependent by their parents as long as they are under the age of 24 years old.

Many college students were forced to move home during COVID-19 as schools closed and dorms were shut down. IU Southeast was one of those schools.

While millions of college students lost their income the question of how they would pay for college rose. Student loan interest is being waived “at least” until Sept. 30, 2021, according to the office of Federal Student Aid located in University Center South, room 105.

“The level of terror that some of these folks are feeling is real because they know, especially if they come from a low-income family, that that college degree is the thing that most likely is going to help them get out of poverty,” Sara Goldrick-Rab said in an interview with the Public Broadcasting System.

In the most recent stimulus package released March 12, many college students still do not receive direct funding if they are claimed as dependents on their parent’s 2020 taxes. While the amount of money their parents will receive for each dependent is higher than the last stimulus, there is no guarantee that college students receive that money from their families, thus keeping college students in a financially vulnerable place.

And yet college students have still to receive a direct stimulus package.