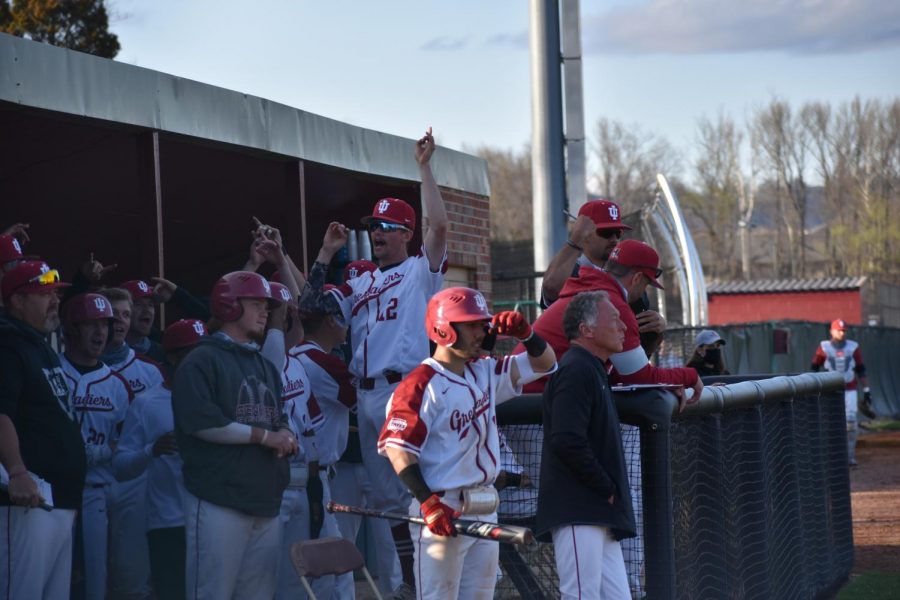 Junior utilityman Tyler Mills, (#12), attempts to keep spirits high in the dugout during the tense opener of a crucial three-game series against Asbury on Friday, March 26. The Grenadiers battled through 10 innings before winning 7-6 in the bottom the 11th.

As the season reaches the halfway point, the IU Southeast Baseball team has to consider themselves fortunate for their current standing. After starting the season 5-10, the Grenadiers are currently riding an eight-game winning streak and have won 12 of their last 13 contests since the beginning of March.

While it took some time to get their overall record several victories over the .500 mark, the same could not be said for their record in River States Conference play. With series sweeps of Rio Grande, IU Kokomo, and Ohio Christian, the Grenadiers entered the weekend with a blistering 9-0 record in league action.

That perfect slate was put to the test over the weekend when the Grenadiers hosted rival Asbury for a three-game weekend series. The Eagles (20-4, 8-1 RSC) boasted arguably the top pitching staff in the RSC, leading the league with a 2.24 ERA, a .201 opponent’s batting average, and 76 runs allowed.

The RSC Regular-Season title’s fate was possibly in the balance, and those high stakes showed throughout the series. Ultimately, the Grenadiers persevered courtesy of a pair of walk-off winners sandwiched between a blowout to sweep their fourth consecutive series in conference play. On Friday, March 26, the series opener gave the initial impression that each contest would be deeply contested from the start.

“[Asbury’s] a veteran group and Manny Cervantes, their head coach, he’s done a great job with that program,” Head Coach Ben Reel said.
Opening Thriller
The stands aren’t packed, and there are still parking spots to be had, but the noise level is intense behind the backstop at Koetter Sports Complex as the Eagles try their best to intimidate their opponents from the dugout. It seemed to be working in the opening frame, as the Eagles fired the opening salvo by bringing home three runs courtesy of as many Grenadier miscues.

After a game filled with both defensive and running errors by the Grenadiers and an extremely well-played pitching and offense game by the Eagles, Friday’s series opener went into extra innings, with both teams playing their absolute hardest to win by the slimmest of margins. With their perfect streak in conference play on the line, the Grenadiers were fighting for a chance to shine.

The Grenadiers managed to fight out a win in a brutal 11-inning game 7-6 that saw at least four Grenadier errors, several shutouts, and one near game-ruining baserunning gaffe at third base on a caught line-drive.

“We struck out multiple times with guys in scoring position, had a baserunning mistake at third base where we didn’t freeze on a line drive, walked leadoff hitters, but we still found a way to win,” Reel said. “If you’re good when you’re having a bad day, that’s always a positive.”

The Grenadiers rallied back from their comedy of errors in the bottom of the third, initiated by a one-out double by freshman infielder Ethan Shafer, his first knock of the season after starting the year 0-for-25. Junior shortstop Clay Woeste and senior infielder Matt Monahan followed with consecutive RBI singles. Singles by junior catcher Brody Tanksley and junior outfielder Marco Romero loaded the bases before junior infielder Drew Hensley reached on a throwing error by Eagles’ starter Will McDonald, scoring both Monahan and freshman courtesy-runner Andronico Recasas.

Despite another RBI single from Woeste in the fourth, the Eagles answered over the next two frames, starting with an RBI single from Colton Back in the fifth. Trevor Campbell followed in the sixth, taking a 2-0 pitch from junior lefty Trevor Reynolds over the left-centerfield fence to tie the ballgame at five.

“Trevor did a great job keeping us in it, but he got the first two guys out on three pitches [in the sixth], then goes 2-0 against one of the best hitters in our conference in Campbell, then serves one, and he hits a bomb,” Reel said. “That kind of took the wind out of our sails, but Trevor always gives us a chance to win.”

Neither side broke through over the final three frames, despite a bases-loaded situation with only one out in the bottom of the ninth and the slugging Tanksley at the plate. After Tanksley launched a low line-drive between second and third base, sophomore outfielder Ullom found himself just a bit farther out from safety than he would have liked as the ball was caught by Eagles third baseman Walker Paris. From there, it was a mad dash and a reckless dive back to third. Despite a near photo finish, Ullom’s efforts were in vain, earning a bruised side for his trouble alongside a third out for the beleaguered Grenadiers.

“It hurt at the time considering we didn’t know if we were gonna win or not,” Ullom said.

The Eagles dugout erupted from the possibly catastrophic play, using that energy to take the lead in the 10th when Kaiden Zacharias scored on a Paul Haupt fielder’s choice.

Though things looked rough, the Grenadiers still kept their drive, determination, and burning morale throughout the game, pushing them on towards their final victory.

“I think the momentum shift late in the game usually doesn’t go your way when it happens like that, but I truly believe our guys had it in them,” said Reel. “My gut all night was just ‘we want an opportunity,’ and we had opportunities, but just give us one more.”

Friday night wasn’t without triumphs for the Grenadiers as they tied the contest in the bottom half. After Romero reached on a leadoff walk, Hensley hit into what should have been a groundout, but an errant throw from Austin Dick allowed Romero to trot home easily and tie the game once more.

In the 11th, Woeste singled, followed by Monahan being plunked by a pitch, setting the redemption stage for Tanksley. The right-handed hitting catcher redeemed his team for a multitude of missed opportunities that night with an opposite-field, allowing Woeste to race home from second base. That final run broke the two-inning tie that held both teams and the fans in suspense, sending everyone home well after dark.

“Coach Reel has been trying to preach it all year; we’re playing ourselves,” said Woeste. “We’re going out there and just not trying to worry about the opponent too much; we’re just trying to do our best.”
Sweep Dreams
Riding the wave of their walk-off victory in the opener, the Grenadiers returned to Koetter Sports Complex the following day amid clear skies and temperatures in the mid-70s, hoping to finish the series by taking both games of a critical doubleheader.

Eagles’ starter Alec Lush’s 1.65 ERA meant little to the Grenadiers in the day game, as they tagged the southpaw for four runs over just two innings, half of which came by a two-out two-run single by Monahan in the second.

The Eagles’ bullpen hardly fared any better against the red-hot Grenadier bats, which continued the assault with 14 runs across the next three frames, highlighted by a two-run home run by Woeste in the fourth and a three-run blast by Monahan in the fifth.

“For us, it’s just about playing our best baseball,” Reel said. “As long as we’re doing that, that’s all I care about; it’s just nice to play well and be rewarded for it.”

The nightcap saw Hensley take the mound to try and complete the sweep, but the Grenadiers had to contend with southpaw Tyler Morrison, who came in leading the RSC with a microscopic 0.60 ERA. While Morrison held the Grenadiers scoreless over the first four innings, the Eagles struck first in the third on doubles by Garrett McIntire and Haupt.

The Eagles added insurance in the fifth, starting when a one-out single from McIntire forced Hensley out of the game. The move to the bullpen did little to prevent damage as the Eagles loaded the bases against freshman righty Lane Oesterling before Paris laced a two-run single to right.

Down 3-0 against one of the RSC’s top pitchers, the Grenadiers rallied after Shafer reached on a one-out walk followed by a double by Woeste. Despite Monahan hitting a high infield popup, Tanksley kept the rally hopes alive with a double to right-center, bringing the Grenadiers within one run.

After Ullom was hit by a pitch with one out in the sixth, Daunte DeCello came into the batter’s box for just the second time since returning from a knee injury. After bunting in the series opener, DeCello laced the ball to left for a pinch-hit single, putting the tying run in scoring position and forcing Morrison from the game.

“Last night, I knew we needed to get the runner over, but today, I didn’t know if I was gonna need to bunt or not because we needed one run,” DeCello said. “I didn’t get the signal for a bunt, so I just got my pitch and swung on it.”

Eagles’ reliever Jackson Cole possibly felt the stress of the situation, inheriting runners on first and second with only one out. The intensity led to a pair of wild pitches, the latter allowing Ullom to score the tying run. An attempted play at the plate caused the ball to trickle up the third-base line, giving pinch-runner Tyler Mills a chance to score the go-ahead run, only to be gunned down at the plate to end the inning.

The situation had the makings of the night before, as Monahan started the seventh with a one-out single. Tanksley followed by taking a pitch to his left arm, pushing Monahan into scoring position for Romero, who laced a single into left-field. Much like last night, Monahan raced around third, beating an attempted throw to the plate to give the Grenadiers another walk-off winner, 4-3.

Romero’s clutch RBI single became the latest in a long line of late-game heroics for the Grenadiers, which also gave the Grenadiers their fourth consecutive conference series sweep, pushing their record to 12-0 in RSC play.

“It felt awesome [because] we needed to get that third game of the series to get the sweep,” Romero said. “I was just trying to get a good pitch to put in play, and I knew Asbury was shifting to the right side, so I was trying to put something on the left side of the field and got the pitch for it.”

Reel was especially proud of how his squad fought from behind once again, which has become one of the themes of the 2021 campaign. Another theme for this squad had been injuries to some of their top players, typified by receiving contributions from DeCello for the first time since the Grenadiers’ four-game meltdown against Huntington to end the month of February. Other key injuries include sophomore outfielder Derek Wagner, who hasn’t played to this point due to a broken wrist, and junior right-hander Jacob Frankel, who recently underwent surgery to repair a torn meniscus.

“The biggest thing with us is that we’re still hobbling around,” Reel said. “Derek hasn’t swung the bat, and along with Jared Jones and Frankel, so we’re just waiting for that swell so we can ride that wave to the shore.”

The Grenadiers return to action on Tuesday, March 31, when they travel to confront #3 University of the Cumberlands. The two sides already played against one another once this season, with the then eighth-ranked Patriots holding on against the Grenadiers 7-6 in Williamsburg, Ky. First pitch for the rematch is scheduled for 5 p.m.