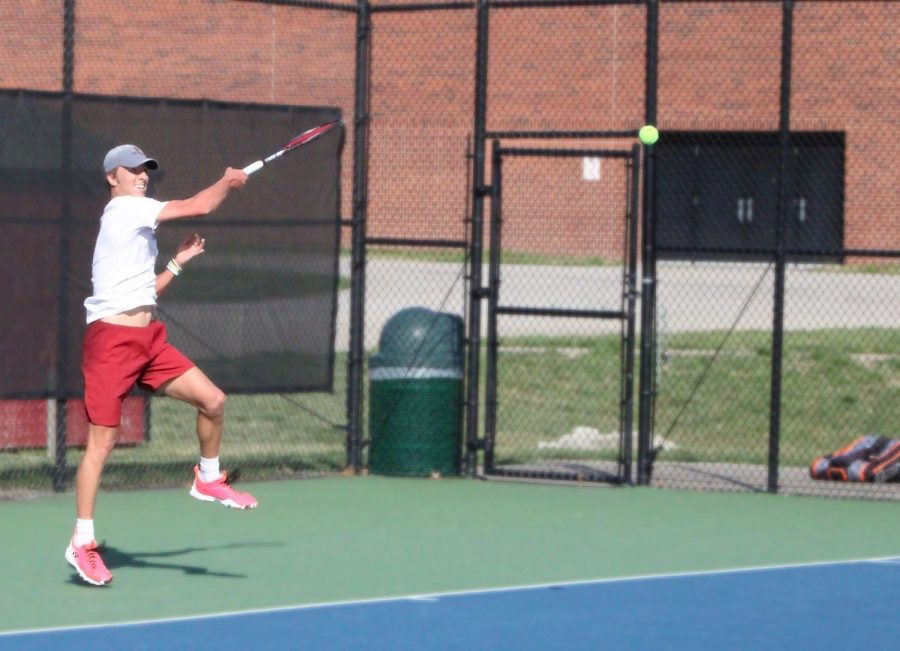 Freshman Connor Mason returns a volley against Asbury's Duarte Teixeira at #5 singles on March 27. Mason fell behind early in the match before rallying back to win the match 4-6, 6-3, 1-0(8).

Despite a 2-3 start to the spring portion of their season, the IU Southeast Men’s Tennis team caught their footing as they began River States Conference play. The mostly youthful Grenadiers started the conference portion of their schedule with a dominating 6-1 victory over Brescia on Saturday, March 20, followed by 5-2 victories over Oakland City and Midway over the following week.

The three victories brought the Grenadiers to a perfect 3-0 record in conference play, a standing Joe Epkey’s squad has grown accustomed to in the past. However, like in years past, that perfect record was on the line as the Grenadiers hosted RSC powerhouse Asbury on Saturday, March 27.

The last time the Grenadiers defeated the Eagles was on April 30, 2016, when the Grenadiers upset a #25 Eagles squad 5-2 to claim the Kentuckiana Intercollegiate Athletic Conference (KIAC) Tournament championship, the last before the league’s rebranding into the RSC. Ever since that day, the Grenadiers had played second-fiddle to the Eagles in the RSC standings and tournament action.

The biggest fight in doubles came from the top flight, yet Brock Wincell and Cade Burman couldn’t hold on against Rodrigo Cavero and Choopat Suvimolstean, falling 6-4, allowing the Eagles to sweep the first team point of the match.

At the top singles court, Winchell dropped the first set to Suvimolstean 6-2 before taking an early 4-3 lead in the second set. He was ultimately done in by some close calls, his resulting frustration growing as he watched an early advantage turn into a 6-2, 6-4 defeat at the hands of the Eagles’ ace. The victory for Suvimolstean guaranteed a team victory for the Eagles once again.

“I thought that I had a couple of close line calls go against me,” Winchell said. “I lost my cool and ended up missing too many balls at the end, and [Suvimolstean] came back and got the match.”

Despite the Eagles clinching the match, the Grenadiers showed fight from their lower singles flights, led by Cade Burman defeating Cavero at #3 singles 6-4, 7-5. Freshman Caleb Harris followed at #6 singles by edging out Penuela 6-3, 6-4.

At #5 singles, Mason dropped a tightly contested first set to Teixeira 6-4 before battling back to take the second set 6-3. As the last match remaining on the court, both Mason and Teixeira agreed to forego the typical third set in favor of a tiebreaker. As had been the case for the entire match, the two combatants battled point-by-point. A close outside call by Mason on match point shocked Teixeira, who crossed the net to try and argue the call, but it did little to change the 8-6 victory given to Mason.

“It was match point and [Teixeira] hit a ball a little bit wide, I called it out, and he thought it was in,” Mason said of the close call. “I know it’s frustrating to lose on a close call, but that’s just how it went.”

Despite the match loss, Epkey was impressed with his team’s resolve against the RSC’s perennial powerhouse. He also believes that the youthful Grenadiers will continue to improve as the season continues, knowing that a possible postseason rematch against the Eagles remains a possibility.

“If our guys didn’t believe they could win [against Asbury], they sure as heck do now,” he said. “We have no doubt that we can win in this conference and win the conference this year, even with a young team.”

The Grenadiers return to action on Friday, April 2, when they travel north to confront IU South Bend beginning at 1 p.m.