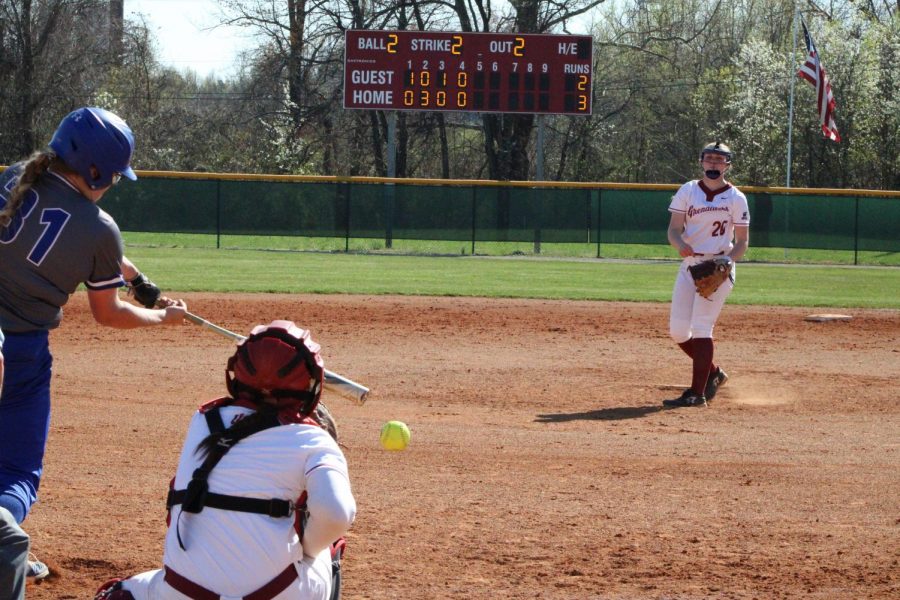 Brescia's Brooklyn Ray (#31) tries to make contact on an off-speed pitch from Grenadier freshman pitcher Gabby Mahoney, resulting in a weak groundball back to the pitcher's circle in the nightcap of a doubleheader on March 29. Mahoney went 5.2 innings, allowing four runs on 10 hits and earning her fifth win as the Grenadiers took the game 11-4 and swept the four-game season series against the Bearcats.

The last time that the IU Southeast Softball team confronted a River States Conference rival, they endured a 13-0 loss against Rio Grande in the 2019 RSC Tournament before winning the loser’s bracket to set up a rematch in the tournament’s title game. The Grenadiers built off their momentum to hand the RedStorm their first loss of the tournament 4-2 to set up a winner-takes-all finale, which the Grenadiers also took 3-0 to win the RSC Championship and a trip to the NAIA Softball Opening Round.

Despite the euphoria of winning the RSC Tournament in such dramatic fashion, as well as a historic 19-2-1 start to the 2020 campaign, the COVID-19 pandemic ended the season before the Grenadiers could begin conference play. Fast forward to Sunday, March 28, 2021, when the Grenadiers traveled to Owensboro, KY., to confront rival Brescia almost two years after the Grenadiers captured their seventh conference tournament title in program history, their first since 2014.

If the Grenadiers had any rust from going almost two years without facing a conference opponent, it did not show as they swept the weekend doubleheader, using home runs from junior first baseman Kelsey Warman and true freshman shortstop Macie Zink to take the day game 5-1. The hard-hitting duo followed by each driving in three runs to lead the Grenadiers to a 13-3 victory in the nightcap.

With an early 2-0 record in RSC play, the Grenadiers returned to Koetter Sports Complex the following day to face the Bearcats in another twin-billing. The change in venue made little difference on the outcome as the Grenadiers swept the Bearcats for the second consecutive day by scores of 9-2 and 11-4.

“Brescia’s always been a nemesis, a foe we really take pride in playing against because [Bearcats’ head coach] Traci [Smith]’s teams are usually well-prepared,” Head Coach Joe Witten said. “We hit the ball like we expected to in these games this year.”
Sweeping Away
Witten deviated somewhat from his typical lineup construction when the four-game series began in Owensboro, penciling Maggie Lubbehusen into the leadoff spot as an outfielder. The junior slugger, normally an infielder and designated player, led the Grenadiers with a .404 batting average during the shortened 2020 campaign but missed most of the first half in a walking boot due to a foot injury.

“I broke my foot, so I haven’t been able to play,” Lubbehusen said. “It really makes me ready for the rest of the season having most of us back.”

The addition of Lubbehusen in the lineup may have helped unnerve Bearcats’ starter Keeley Eans in the day game, as the Grenadiers fired the opening salvo when junior outfielder Ashtyn Sharp smacked a screaming line-drive to the base of the centerfield fence for a one-out triple. Freshman designated player Dallas Henderson followed by sending a flyball to left field, allowing Sharp to easily trot home on the sacrifice fly.

Not satisfied with a slim 1-0 margin, the Grenadiers persisted in their assault, adding two more runs in each of the third and fourth innings. In the third, Sharp and Henderson drew consecutive walks before Jackman ripped an RBI single to score freshman pinch-runner Katie Templeman. After  Zink was plunked by a pitch, Warman followed with an RBI single of her own.

The Bearcats finally broke through against junior right-hander Hannah Ogg in the sixth after taking advantage of fielding miscues from freshman infielder Ysa Fox and Templeman sandwiched between a Courtney Peyton RBI triple. The Grenadiers tightened up their defense to minimize the damage before taking back those two runs with interest in the bottom half when Templeman and Henderson ripped back-to-back doubles followed by a Jackman RBI triple. Warman finished things off with an RBI single, pushing the Grenadier lead to 9-2.

After pitching six strong innings of two-run ball, Ogg (15-7) was lifted from the pitcher’s in favor of junior right-hander Kasey Pearson, who needed only 10 pitches to complete the seventh and lock down the victory. Jackman led the way by going 4-for-4 with a pair of RBI while Henderson drove in three on a pair of doubles. Warman also notched a pair of RBI on 3-for-4 hitting.

“I knew [Brescia] was gonna come into these games even stronger because they lost twice the day before, so I knew that we had to stay tough,” Ogg said. “I was confident going in because when I warmed up, I knew everything pitching-wise was working for me.”

The Bearcats looked to avoid the four-game sweep as they started the nightcap by scoring a first-inning run on a Brooklyn Ray RBI single. The Grenadiers made sure the Bearcats lead didn’t last long as Jackman led off the second with a double, followed by a single and stolen base from Probus. Junior outfielder Kaitlyn Flowers gave the Grenadiers the lead after smacking a two-run single into centerfield before Warman crushed an RBI double just in front of the centerfield fence, extending the Grenadier lead to 3-1.

Ray drove in Cassidy Moss to record her second RBI of the contest, cutting the Grenadier advantage 3-2. While the fourth inning was a pitcher’s duel between Grenadier freshman right-hander Gabby Mahoney and Bearcats starter Katie Brewer, the Grenadiers broke through for four additional runs against Brewer in the fifth, led off by a Jackman RBI single into center to score Gilliam. Probus followed with one of the biggest blows of the contest as she ripped a ball into the left-centerfield gap for a two-run triple before coming home on a Warman RBI single.

Mahoney allowed only two runs through the first five innings but ran into trouble in the sixth when Rileigh Bobo ripped an RBI double, followed by an RBI single from Lindsey Peyton to cut the deficit to 7-4. With two outs in the inning, Witten made the call to the bullpen, bringing in Ogg, who forced Courtney Peyton to pop out behind first base to end the threat.

The Grenadiers added four insurance runs in the bottom of the sixth, starting when freshman catcher Erin Templeman led off the frame triple to right before coming home on a pinch-hit single from Lubbehusen. Jackman followed with a three-bagger of her own to plate Henderson and Zink. Flowers finished matters with an RBI single back up the middle to bring Jackman home.

Despite allowing a one-out single to Moss, Pearson forced Keeley Eans to ground into a game-ending 4-6-3 double play to seal the game 11-4. Jackman and Flowers each drove in three while Probus and Warman each plated two. Mahoney (5-0) earned her fifth win on the season after twirling 5.2 innings, allowing four runs on 10 hits.

Between her start in the day game and her critical relief appearance in the nightcap, Ogg pitched 6.1 innings on the day. This came just a day after twirling 11 consecutive innings against the Bearcats in Owensboro, pitching a complete game in the day game followed by going four innings in a run-rule shortened five-inning nightcap. For the series, the two-time RSC Pitcher of the Week allowed six runs over 17.1 innings while striking out 15.

“I had to mix things up a little because I did see [Brescia] a lot the day before,” Ogg said. “I was a little nervous coming into this game, but it’ll build our confidence going into the rest of the conference, knowing that we can play to our potential.”
Close to Full Power

Aside from the satisfaction that comes from sweeping a four-game series against a conference opponent, the Grenadiers also have the benefit of seeing some key contributors starting to return to the field after battling injuries.

Alongside Lubbehusen returning from the broken foot, star freshman right-handed pitcher/outfielder Brooklyn Gibbs may be closer to returning to the field as well. The Indiana State transfer recorded a 0.95 ERA over 22 innings in the circle and hit 13-for-20 with four home runs and eight RBI at the plate before suffering a torn ulnar collateral ligament (UCL) in her left thumb.

According to multiple sources, including Gibbs herself, she is set to be re-evaluated later this week and is projected to return to the pitcher’s circle within the next couple of weeks. Depending on the results of the evaluation, it may take longer for her to swing the bat once again.

“It’s paramount because they’re part of the spine of this team,” Witten said of Gibbs and Lubbehusen. “When Maggie’s bat is right, she can hit the ball as well as anyone in the league. We’re gonna have to be patient on when we can have Brooklyn back because we need one more pitcher in that bullpen to help get a few more outs.”

The four-game series against the Bearcats is the result of the RSC moving to a divisional format made possible by the ratification of the Grenadiers’ next opponent, Oakland City, into the conference prior to the 2020-2021 sports season. The Oaks brings the total number of softball teams in the conference to 10, allowing for the creation of two five-team divisions. Division opponents now play four games against one another throughout the season, with two games at one venue and two more at another.

“I think it’s exciting because we get to see some of our opponents more,” Probus said. “I think it will give us a more accurate read of who the best team in the conference is.”

The Grenadiers travel to Oakland City, IN., to begin the four-game season series against the Oaks on Friday, April 2, for a doubleheader starting at 4 p.m. The two rivals will then travel back to Koetter Sports Complex for another twin billing to conclude the season-series on Tuesday, April 6, starting at 2:30 p.m.