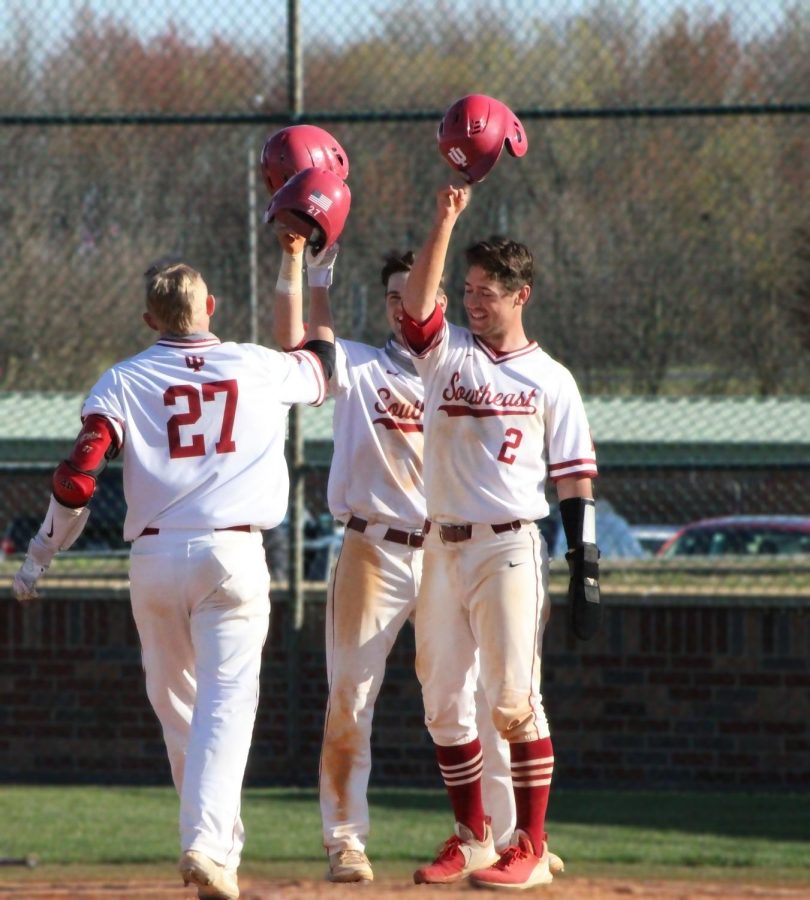 Junior catcher Brody Tanksley (#27) taps helmets with teammates Matt Monahan (center) and Clay Woeste after smashing a three-run home run against Oakland City in the nightcap of a doubleheader on April 3. The homer was Tanksley's second big fly on the day after hitting a two-run shot in the day game of the twin billing.

The IU Southeast Baseball team had to feel confident in themselves a week after sweeping a crucial three-game series against River States Conference rival Asbury. The sweep of the Eagles helped the Grenadiers maintain a perfect 12-0 record in conference play, putting them one step closer to clinching the RSC Regular-Season title and another trip to the NAIA Opening Round.

Three days after completing the sweep against the Eagles, the Grenadiers scraped by Georgetown College 5-3 behind six no-hit frames from junior right-hander Brenden Bube. The victory over the Tigers was the 12th consecutive win for the Grenadiers, as well as their 16th over their past 17 contests.

With both a perfect slate in conference play and a lengthy winning streak on the line, the Grenadiers began another three-game weekend series, this time welcoming RSC newcomer Oakland City to Koetter Sports Complex. The Oaks only won two games in conference play coming in but kept pace with the Grenadiers throughout most of the series despite the home squad walking away with yet another sweep by scores of 6-3, 11-6, and 5-2. A possible culprit for the closeness of all three contests was the Grenadiers stranding 25 total runners on base throughout the series.

“All weekend, we’ve missed some big hits and a lot of opportunities,” Head Coach Ben Reel said. “Our Achilles heel right now is just not being able to execute with guys on third base. With less than two outs, you have to score those runs every time and we’ve just been struggling with that as of late.”
Opening Axeing
In lieu of typical Friday-night starter Cade Reynolds, Reel handed the ball to junior southpaw Hunter Kloke to begin the series against the Oaks. The potential MLB draft pick ran into early trouble in the first when he surrendered a one-out walk to Victor Alvarez and a double to Jenrick Rivera. Joel Archer took advantage of the early scoring opportunity by lacing a two-run single to right.

Junior utilityman Tyler Mills gave the Grenadiers insurance in the fourth when he came home on a passed ball. Not satisfied with a 4-2 lead, senior infielder Matt Monahan took a 1-1 pitch from Oaks starter Tristen Cummings over the right-field fence for his conference-leading ninth home run on the season to lead off the fifth inning.

Despite allowing a sacrifice fly in the sixth, Kloke (5-1) tossed six solid innings of three-run ball while walking three and striking out five before handing the ball to freshman right-hander Lane Oesterling. Aided by an Ethan Shafer RBI single in the eighth, Oesterling recorded the final nine outs to earn his second save of the year, allowing a pair of hits, walking one, and striking out two to secure the first game of the series 6-3.

“Kloke pitched awesome, probably one of the best outings he’s had as far as just poise,” Reel said. “I took him out after 100 pitches and he looked like he could throw 50 more.”
Chopping Down and Sweeping Aside
After extending their winning streak to 13 games, the Grenadiers returned to Koetter Sports Complex the following day for a doubleheader. In the hopes of pushing the streak further, Reel gave the starting nod to freshman right-hander Cade Reynolds to begin the first half of the twin billing.

The Grenadier defense behind Reynolds might have not been fully warmed up as the Oaks plated the opening run courtesy of a pair of miscues and an RBI single from Rivera. The defensive mishaps did not prevent the Grenadier bats from taking the lead when Monahan brought Woeste home on an RBI single before coming home when a Jake Scott groundball was misplayed by Oaks third baseman Colton White.

“There was just a lack of focus and concentration in the first inning,” Reel said of the sloppy start. “Defense is the hardest thing to teach or be good at in any sport because you don’t know what the other person is going to do.”

Both sides exchanged a run in the second before Monahan once again brought Woeste home, this time on an RBI double to left-center in the bottom of the fourth, extending the Grenadier advantage to 4-2. The Oaks responded in the top of the fifth, rallying to tie the game on RBI doubles from Alvarez and Rivera, prompting Reel to mobilize the bullpen. Replacing the younger Reynolds with his older cousin in junior lefty Trevor Reynolds, the Grenadiers escaped the frame courtesy of an Archer flyout and White groundout.

Despite losing the lead, the Grenadiers answered the Oaks’ rally with one of their own in the sixth, beginning when Berenda scored on a wild throw from Oaks reliever Brad Weber. Romero followed by lacing a ball into the right-centerfield gap to score Woeste and Recasas before coming home on an infield single from Scott.

Even after a Woeste RBI double pushed the Grenadier lead to 8-4, Tanksley wasn’t completely comfortable with that margin, instead launching a 2-2 pitch from Jack Jagelewski over the left-field fence for a long two-run homer.

Reel chose to conclude the contest by sending out junior right-hander Jacob Frankel, who had missed the previous four weeks due to a torn meniscus. Despite giving up a pair of runs, the righty made it through the ninth, striking out two to complete his return from injury and give the Grenadiers an 11-6 victory.

“It was definitely a lot of fun to get back out there with the guys,” Frankel said of his return. “With that first batter, there was a lot of adrenaline, but after that, I settled in and pitched how I wanted to pitch.”

In the nightcap, Woeste and Monahan began the bottom of the first with consecutive singles, setting the table for a Romero RBI double to bring home the speedy Woeste. The early 1-0 advantage appeared to be enough for junior right-hander Drew Hensley, who was on cruise control through the first four innings en route to retiring the first 14 batters he faced.

After recording the first two outs of the fifth, Hensley ran into trouble when Tyler Roberts laced a single to right, ending the hopes of a perfect game. Chandler Dunn and Austin Morris followed by drawing a pair of walks to load the bases and put the slim 1-0 Grenadier lead in jeopardy.

Despite losing touch for his pitches with every additional pitch thrown, Hensley summoned what little he had left to persevere, striking out Kyle Stuckey to end the threat.

“I just lost touch with my fastball, trying to be too fine with it instead of trusting my defense,” Hensley said. “Early on in the game, it was really good. I guess I was just wearing down a little bit and couldn’t find the strike zone as much as I did earlier.”

The close call served to fire up the Grenadier bats as Woeste led off the bottom half with a triple. After an intentional walk to Monahan, Tanksley flexed his power once more, launching a 3-2 pitch from Oaks’ starter Pete Smith over the left-field scoreboard for a three-run blast, his second of the day. Two pitches later, Romero joined in on the fun, sending a solo shot over the right-field fence for back-to-back homers.

“That homer felt a little different because [Oakland City] intentionally walked Mony to get to me,” Tanksley said. “I’ve been struggling throughout the day but I was looking to do at least something based on them pitching to me with two strikes.”

While senior right-hander Jared Jones’ second appearance since returning from injury was mired by allowing a pair of runs in the sixth, Bube responded by recording the final five outs to seal yet the contest 5-2 and secure another sweep for the Grenadiers.

“It’s really good because the team’s rolling right now,” Woeste said. “We’re just trying to keep it going and not take anything for granted.”

With the sweep of the Oaks, the Grenadiers remain perfect in RSC play with a spotless 15-0 record and push their overall winning streak to 15 consecutive games, surpassing their streak of 12 straight victories to open the shortened 2020 campaign. The Grenadiers have also won 19 of their past 20, not having lost consecutive contests since suffering a four-game sweep at the hands of Huntington University to end the month of February.

With the return of Frankel, Jones, and sophomore shortstop Daunte DeCello from injuries, the only prominent Grenadier remaining out of action is sophomore outfielder Derek Wagner, who has been out all season due to a broken wrist. Wagner has participated in fielding drills during team practices and figures to be a key bat off the bench near season’s end.

“We’ve been through a lot,” Reel said. “We’ve battled a lot of adversity internally and externally, and I’m proud of our guys because they came a long way.”

The Grenadiers return to action on Monday, April 5, when they travel to face Campbellsville to start the new week at 5 p.m. After a contest against Georgetown College the following day, the Grenadiers will travel to Pittsburgh, Penn., to confront fellow RSC powerhouse Point Park for a three-game weekend series starting on Friday, April 9, at 1 p.m.