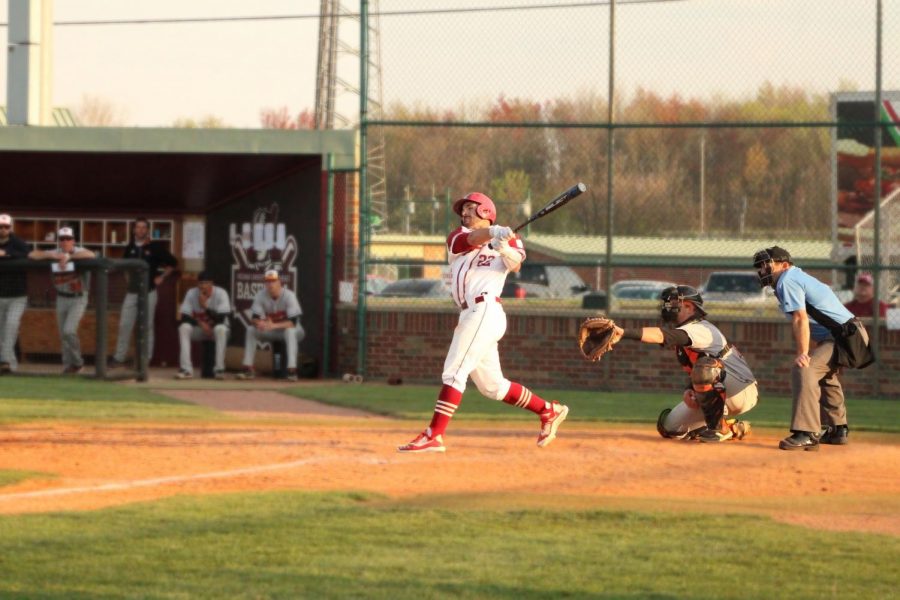 Sophomore outfielder Derek Wagner follows through on his swing as he watches a ball soar out of the park for a two-run blast during the Grenadiers' 14-3 victory over Georgetown College on April 6.

A key theme with the IU Southeast Baseball team in 2021 was the myriad injuries the Grenadiers suffered throughout the season. As the calendar turned to April, however, the Grenadiers began to return piece after piece, including the likes of Daunte DeCello, Jared Jones, and Jacob Frankel.

As the Grenadiers traveled to play Campbellsville on Monday, April 5, they received more reinforcements when sophomore outfielder Derek Wagner made his 2021 debut. Wagner was expected to be a mainstay in the Grenadier lineup on opening day prior to breaking his wrist before the season began. The injury was one of the biggest blows to the Grenadiers early on after the outfielder led the team with nine home runs and 43 RBI in 2019, followed by leading them with a .630 on-base percentage and .733 slugging percentage during the shortened 2020 campaign.

Wagner went 1-for-2 with a walk and scored a run as the Grenadiers defeated the Tigers 5-3, extending their winning streak to 16 straight. The next day, the Grenadiers returned to Koetter Sports Complex to face Tigers of a different color as they welcomed Georgetown College for a nine-inning affair. Having beaten the Tigers 5-3 seven days prior, the Grenadiers utilized four home runs to win their 17th straight by a score of 14-3.

“It’s nice to be consistent, at least when you’re winning,” Head Coach Ben Reel said. “We’ve been a little sporadic at times, but at the end of the day, it’s just about how we finish. That’s all we’re focused on because we’re playing our best baseball at the right time of the year.”

Despite giving up a run in the opening frame, the Grenadier offense had plans for Tigers’ starter Bryan Golnick. Hoping for an easy first inning, the sophomore right-hander instead found himself the victim of a six-run Grenadier assault, highlighted by junior Brody Tanksley launching a 2-1 pitch over the left-centerfield wall for a long three-run home run. Golnick was pulled from the game after surrendering an RBI triple to senior third baseman Jake Scott and an RBI single from Wagner, being forced to watch the rest of the contest from the bench after failing to record a single out.

While the Tigers scratched a second run against Grenadier sophomore right-hander Eli Helton in the second inning, the Grenadiers struck for three more runs in the bottom half when Scott sent an 0-2 pitch from Tigers’ reliever Michael Gomez over the left-field fence for a three-run shot of his own.

After senior first baseman Matt Monahan was hit by a pitch to begin the bottom of the fourth, Tanksley made Tigers’ reliever Jalen Miller pay by crushing the very next pitch over the left-centerfield wall, pushing the Grenadier advantage to 12-2. The fourth-inning blast was Tanksley’s second on the day, as well as his fifth in his last four ballgames.

“I’m just trying to pick up on good pitches right now,” Tanksley said. “These past two days are just kind of warm-ups for a big conference series this weekend.”

A pair of wild throws allowed the Tigers to plate an additional run in the top of the sixth, keeping the Tigers alive by keeping the NAIA Baseball mercy rule from taking effect. In the bottom half, Scott led off with a double before Wagner took a powerful hack at a 1-1 pitch from Andrew Day. Tigers’ left fielder Luke Turino could only turn and watch the ball sail far beyond the left-field fence for a two-run homer.

The two-run shot was the fourth Grenadier longball of the contest, capping off a gratifying 3-for-4 night for Wagner, who starts his 2021 campaign 4-for-6 with a home run, three RBI, and four runs scored. Tanksley finished the night 2-for-5, driving in five runs on his two home runs, while Scott finished 3-for-4 with a homer and four RBI.

“I kinda had a feeling I would hit one out because I’ve been hitting good in the cage and felt great,” Wagner said. “Sitting around for six weeks, just doing everything I can to help the team on the bench, it definitely makes it a lot more rewarding.”

In lieu of a typical starter, Reel opted to use multiple pitchers against the Tigers. Helton earned the win despite going just two innings, allowing two earned runs in the process. Sophomore right-hander Jacob Morley, freshman lefty Connor Kelly, and freshman right-hander Connor Fries combined to record the final 15 outs, combining to allow one unearned run on two hits, walking one, and striking out four.

“We did some good things both offensively and defensively and the pitchers have done a great job the past couple of games,” Scott said. “We got a big series coming up, so we’re going to try to carry what we did this week into this weekend.

With a pair of victories to start the week, the Grenadiers will now prepare to head to Pittsburgh, Penn., for a key River States Conference weekend series against fellow RSC powerhouse Point Park. Depending on the results of this series, as well as a three-game series between Midway and Oakland City, the Grenadiers could potentially clinch the RSC regular-season title this weekend. Full conference rankings are available on the River States Conference’s website.

“I was really excited that this weekend’s weather turned out to be beautiful and we wouldn’t have to worry about if we’re playing or if we’re not,” Reel said. “I definitely didn’t want us sitting on our hands all week.”

The series opener against the Pioneers is slated for Friday, April 9, at 1 p.m. followed by a doubleheader the next day starting at noon.