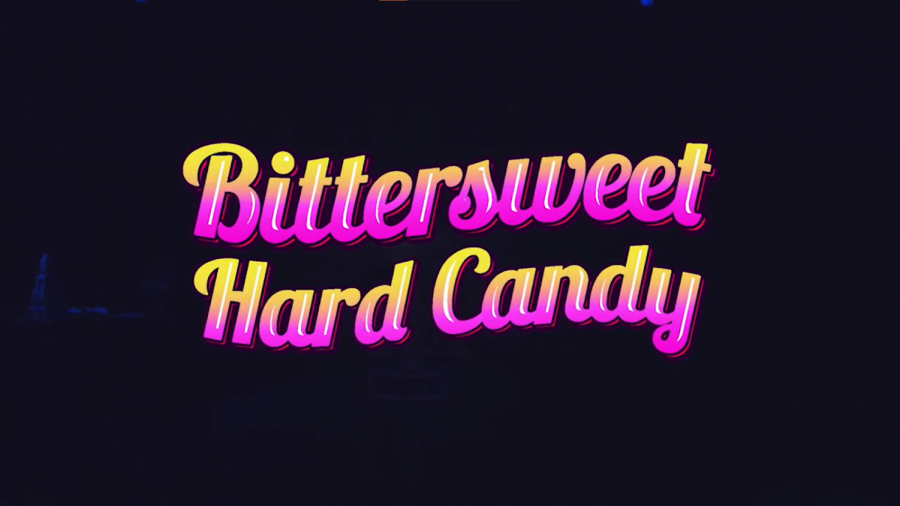 After a year of uncertainty, IU Southeast’s Robinson Stage is finally back in full swing with its first student-produced show in at least a decade.

Directed by Ashley Wallace and written by theatre senior Charles Lauffer, “Bittersweet Hard Candy” follows the misfortunes of Drew, a college-aged malcontent with a penchant for classic literature and dry wit played by theatre junior Hamilton Craig, who’s been forced to work in a small-town candy shop for a high school mistake.

While the play didn’t have in-person performances as some thought it might during production, it is streaming for free from April 1 to April 15 on Youtube, though the Ogle Center asks you to donate if you find it within your grasp.

Like the last Robinson Stage show, “Vanya and Sonia and Masha and Spike,” this show has a small cast, with only five students on stage. However, the small cast manages to take up a lot of space, allowing the mundane characters of a corrupt candy shop owner, three college kids, and an eccentric marine veteran to each have their own minute in the limelight.

The cast includes IUS acting veteran Jaime Irving as Drew’s obnoxious bullying coworker Bubba and three new-to-IUS performers. English writing junior and experienced actor Samuel Moore puts in a solid first performance at the Robinson as Louie, the underhanded candy store owner with a heart of gold. In contrast, theatre sophomore Azzam Azzam and IUS alum and current theatre student M. Salisbury put on their first career performances as eccentric veteran Harold and Drew’s friend Jordan respectively.
Relatable Comedy
“Bittersweet Hard Candy” is an absurdist comedy, according to Lauffer. Still, while there is some absurdity in the premise, the emotionally understandable characters manage to transcend their quirky behavior and odd setting and end up feeling more like an adult “Charlie Brown” skit than Albert Camus. The show manages to capture the “absurdity” of life as a menial worker but then goes a step further in teaching Drew, and thereby the audience, some important life lessons through the course of a surrealized day on the job.

Through the 71-minute runtime, Drew is faced with an annoying customer, a frustrating boss, a terrible coworker, and the struggle to not completely lose one’s mind in a dead-end job while confronted with your peers’ success. Each issue speaks easily to the life of most college students in one way or another. Still, each situation manages to turn the dial up to 11 on all the weird or annoying things everyone experiences, such as working at the bottom of the ladder at one point or another, before taking a hard look at why those things actually bother us.

For example, Harold’s grating and borderline clueless behavior, whose eccentricities and charming wisdom are played with aplomb by Azzam. While his constant chatter and inability to understand simple social cues frustrate both Drew and the audience upon first meeting, more redeeming qualities to the character are revealed with each subsequent visit.

The level of emotional connection and subtle depth in Lauffer’s first time out is surprising and a more than welcome addition to what could be an easy workplace comedy.
Production
While the actors’ efforts are more than obvious at first glance, sometimes the little details in costuming, sound, set, and video editing gets left out when looking at a play’s merits. However, overlooking the IUS Technical Theatre Department’s quality of work on display for this performance would be doing an injustice.

Firstly, the set manages to be both boring and eye-catching at the same time, with the mostly blank walls and bland looking jawbreaker reminding one a bit of a prison or other institutional setting while the odd giant candy decor feels both humorous and a bit like painting a corpse with clown makeup. Between scenic designer Rebbekah Meixner-Hanks, who has also been a staff mentor for Lauffer throughout creating this play, and new technical director Charles Nasby and his student techs, the set becomes almost a character of its own.

The show’s costumes also deserve a nod, as student costume designer and theatre senior Alex Conn managed to perfectly encapsulate each character in the play with straightforward but noticeable wardrobe choices. Conn shared their original designs with The Horizon during the production process, and the end result seems to have nearly leaped off the page with minor changes from sketch to screen.

Finally, the video editing by Salisbury, who also nearly steals the show as the quirky and self-assured Jordan, was stellar. The title cards and video quality look extremely professional, and beyond the ability to pause the action, the trip from stage to streaming devices is as inoffensive and seamless as possible.
Final Verdict
“Bittersweet Hard Candy” is, unlike the main character’s job, a joy. From the small cast’s chemistry to the timing of the jokes and banter, alongside the gorgeous behind-the-scenes work from IUS Technical Theatre, the show gets laughs and a bit of emotional connection without ever feeling like it’s trying too hard. It would have been well worth ticket prices at the Ogle Center, and it’s more than worth the 71 minutes it takes to enjoy it. Highly recommended.