#18 Grenadiers prepare to kick off RSC Tournament after clinching the Regular-Season title, but will have to compete without a key bat in their lineup 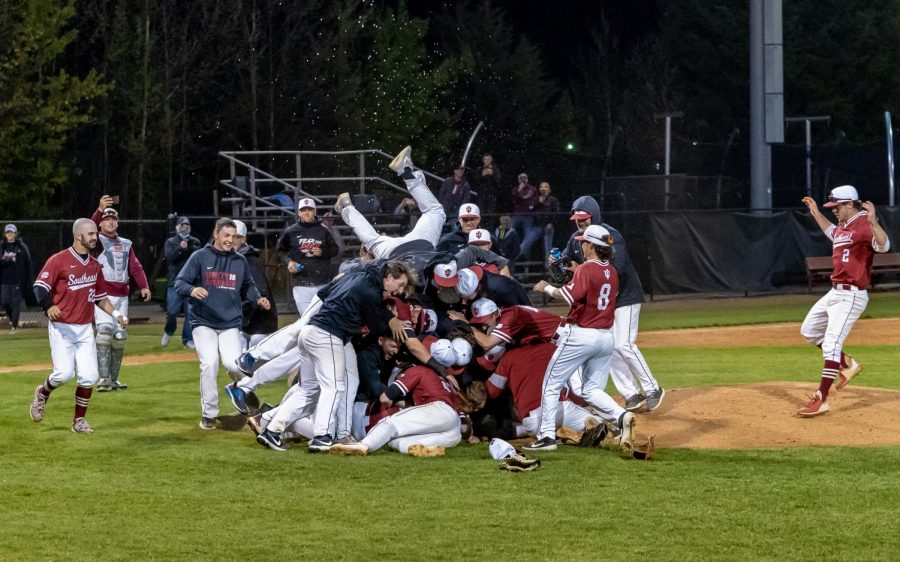 The IU Southeast Baseball team dogpiles in front of the pitcher's mound after sophomore right-hander Drew Hensley finishes off a complete-game against Midway on April 23. The 6-2 victory, which came in the nightcap of a doubleheader, clinched the Grenadiers' third consecutive RSC Regular-Season title and their fifth-straight trip to the NAIA Opening Round.

End of Season Recap
When the IU Southeast Baseball team walked away from Koetter Sports Complex on the eve of Feb. 27, they had just finished one of their lowest points of the season after being swept in four games by Huntington University. The sweep dropped the Grenadiers to a less-than-ideal 5-10 start to the 2021 season, a far cry from the historic 18-1 start they had to begin the shortened 2020 campaign.

There were questions about whether the Grenadiers could bounce back in time for the beginning of the River States Conference portion of the season, especially considering the Grenadiers only played six RSC contests before the 2020 season came to an abrupt end. Fast forward to Friday, April 23, and those worries had lost all merit by the time the Grenadiers began their final home series of the regular season against rival Midway.

Being ranked #20 in the NAIA Top 25 when they hosted the Eagles, the Grenadiers put the finishing touches on what had been a dominant season in conference play with a three-game sweep of the Eagles. With 9-5 and 6-2 victories on Friday, April 23, the Grenadiers captured their third consecutive RSC Regular-Season title and punching their ticket to the NAIA Opening Round for the fifth straight year (Not counting 2020, for obvious reasons).

“Coming out of COVID just in general, we just had to find our rhythm again,” head coach Ben Reel said. “We knew the capabilities of this group, and it’s just nice to everybody else see what we already knew.”

After sweeping the Eagles, the Grenadiers hosted Cumberland College (Tenn.) for a single game in their home finale on Monday, April 26, defeating the Phoenix 17-4. Before the contest, the Grenadiers honored retiring Phoenix skipper Woody Hunt for a legendary career spanning over 40 years.

Being the winningest active head coach in college baseball, Hunt is a three-time NAIA World Series champion and two-time Rawlings National Coach of the Year. During his long, successful tenure, he has won 17 Coach of the Year awards and led the Phoenix to 20 regular-season conference championships spanning three different athletic conferences.

“I think his impact is probably immeasurable, you can’t quantify it,” Reel said of Hunt. “I was fortunate enough that he shared wisdom and criticism with me, he’s given me so much advice and words of encouragement. He’s just a first-class human being.”

The #18 Grenadiers concluded the regular season with a three-game sweep of rival Brescia, extending their winning streak to 12 in a row. The final week and a half were interesting for the Grenadiers as the assistant coaching staff temporarily took over for Reel, who was absent due to family obligations.


Postseason Losses
With the RSC Regular-Season title in tow, the Grenadiers now descent upon Chillicothe, OH. for the RSC Tournament in hopes of winning their first tournament title since 2011. For the near future, however, they will have to compete without star first baseman Matt Monahan, who is out due to undisclosed medical reasons.

What is for certain is that Monahan’s absence will be a significant blow to the Grenadier offense. The left-handed-hitting senior once again established himself as one of the better hitters in the entire country, leading the NAIA with 83 hits, is second in the RSC with a .428 batting average and 14 home runs, and third in the league with 55 RBI.

“Monny’s one of the best players in the country, a fine-tuned piece of this machine that we’ve had running for a while now,” Reel said. “I’m just thankful that he’s safe and healthy. At the end of the day, there’s still a lot of things up in the air.

In light of Monahan’s absence, the Grenadier lineup now has less protection for RSC Player of the Year hopeful Brody Tanksley. For the Brescia series, the Grenadiers have experimented with moving Tanksley to the second spot in the lineup, falling in line with a trend in Major League Baseball of placing a team’s best overall hitter in the two-hole as opposed to traditionally batting such a player third.

As for first base, the Grenadiers have a significant hole to fill defensively while also trying to replace Monahan’s immense offensive production. While several players can potentially play first, Reel believes his best bet comes in sophomore Drew Hensley.

“Drew can play the infield in general, he’s played second this year and he played third all last fall for us,” Reel said. “There’s a couple of guys we could put at first, but I think Hensley’s the best option.”

Moonlighting between the pitcher’s mound and the middle infield, Hensley has been a solid hitter in his own right, batting .364/.426/.418 with 11 RBI in 55 at-bats. As a key figure in the Grenadiers’ pitching rotation, Reel also expects to utilize other players such as junior utilityman Tyler Mills when Hensley takes the mound.

The Grenadiers are set to kick off the RSC Tournament on Thursday, May 6, when they battle #6 Midway. First pitch is scheduled for 11 a.m.