Men’s and Women’s Tennis both fall in RSC Semifinals 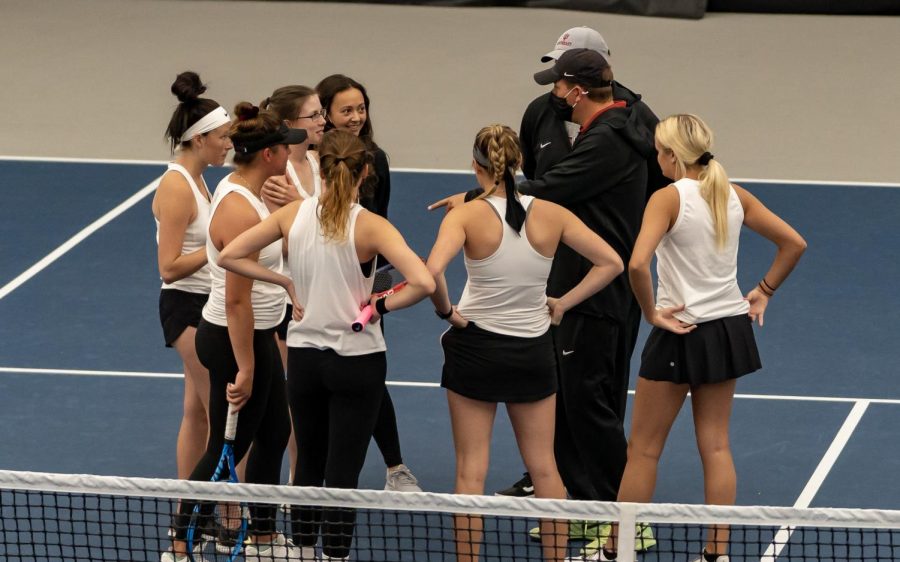 Head coach Joe Epkey gives his Grenadier women's tennis squad a pep talk prior to the singles portion of their RSC Semifinal matchup against IU East on April 23.

After finishing the regular season with losses to rival IU East, the IU Southeast Tennis squads traveled down to Nicholasville, KY. to prepare to take part in the River States Conference Tournament, which began on Friday, April 23. The young Grenadiers on both squads knew they had a long road ahead of them come postseason time, but it did little to hinder their confidence that they could make some noise in the tournament.

The men’s confidence came from a contest on March 27, when they suffered their first loss in conference play against RSC powerhouse Asbury, who eventually won the conference regular-season title for the ninth consecutive season. The women’s squad had a similar loss in the season finale against IU East on April 16, allowing the Red Wolves to clinch the RSC Regular-Season title for the first time in program history.

Every team gathered at the Top Seed Tennis Club a day before the tournament to be honored at the RSC Awards Ceremony. Six Grenadiers were honored with selections to All-RSC teams, led by freshman Audrey De Witt. A true freshman from Hamilton Southeastern High School, De Witt dominated the conference, going undefeated in #1 singles en route to being named the RSC Player and Newcomer of the Year, and earned a spot on the All-RSC First Team.

“Personally, it was an amazing experience [because] the RSC is a very competitive conference with some amazing players in it,” De Witt said. “I realize as a newcomer there is still much to achieve and I am looking forward to a bright future.”

Despite beginning play at 8:30 Friday morning, the Grenadiers showed no signs of sleep deprivation as they pushed through the RSC Quarterfinals, starting with the women’s team breezing to a 4-0 victory over Midway courtesy of quick singles victories from De Witt, Anna Littlefield, and Kaite Weimer. The men’s squad followed with a slightly tighter matchup against Brescia, the contest eventually coming down to a tight contest at #2 singles for freshman Sebastian Burman. After winning the first set via tiebreaker 7-6 (8-6), Burman narrowly captured the second set 6-4 to seal the match and allow the Grenadiers to advance.
Women’s Tennis can’t hold on against IU East
The two squads returned to action just hours later as they both confronted IU East in their respective RSC Semifinal matchups. The women’s team looked to avenge their 4-3 loss against the Red Wolves in the season finale as doubles action began, starting with freshmen Emma Ellis and Weimer falling to Eva Caballero and Amonette Theron 6-3. Freshmen Anna Littlefield and Kate Heuchan answered back at #3 doubles with a 6-3 victory of their own against Nora Riberio and Shelby Good.

That left the doubles point in the hands of the top doubles flight as the sisters of Audrey and Adalyn De Witt, who initially trailed against Linda Marino and Camila Caballero. The single-set contest eventually came down to a tiebreaker, which the De Witt sisters persevered to win 7-6(4), and give the Grenadiers an early 1-0 match advantage.

“Everything was similar to our first meeting other than a change we made in doubles,” head coach Joe Epkey said. “That adjustment helped [because] we were able to win the doubles point this time.”

The Red Wolves did not lose hope as the competition transitioned to singles play, starting with Theron dispatching Weimer 6-4, 6-2 at #4 singles to tie the match. Eva Caballero followed by handling Littlefield in straight 6-3 sets to take #3 singles, giving the Red Wolves a 2-1 advantage.

De Witt continued her dominance as she took on Camila Caballero at #1 singles, scraping by in the first set 6-4, using the victory to fuel her to sweep the second set 6-0. #2 singles saw Adalyn De Witt and Marino battle back and forth throughout the first set, neither player able to pull away before the set reached 7-6. Forced into a first set tiebreaker, Marino pulled away to win the set 7-6 (7-3). The victory pushed wind into Marino’s sails as she took the second set 6-3, giving the Red Wolves a 3-2 edge.

The victory for Marino put more pressure at #5 singles, where Riberio had an advantage over Ellis after breezing through the first set 6-1. Despite Ellis’ holding the lead for much of the second set, Riberio roared back to claim the match 6-1, 6-4, sending the Red Wolves to the RSC Championship against Asbury.

“IU East is definitely one of the toughest teams in the RSC,” Audrey De Witt said. “In both the regular and postseason, we seemed relatively evenly matched with them. If a few things had just fallen our way, I’m confident the results would have been different.”

Despite their season coming to an end, the Grenadiers put together a better season than what is usually expected of a young team. Alongside Audrey, Adalyn De Witt was honored with a spot on the All-RSC Second Team, while Sarah Vanisenberg was named the Grenadiers’ representative to the RSC Champions of Character Team.

Epkey will have the benefit of possibly having all seven players return for the upcoming 2021-2022 campaign as they all have three seasons of eligibility remaining, including Ellis, Heuchan, and Vanisenberg despite playing in 2020. With a full roster set to return, as well as the prospect of additional talent coming in this coming season, those returning are hungry for improvement.

“We are all very excited,” Audrey De Witt said. “With a team of all returning freshmen, one that worked well and supported each other, we expect great things in the future.”
Men’s Tennis swept by Red Wolves
The men’s squad came into the RSC semifinal energized after their quarterfinal victory, though they knew what was ahead of them as they confronted the #2 seed Red Wolves. As opposed to their regular-season meeting, the Red Wolves came into the matchup at full power thanks to the return of top singles star Max Faundez. The Red Wolves’ strengthened roster did not intimidate the Grenadiers, keeping their intensity high as the match began.

“We came out with an unmatched, pure intensity that was a great experience for our teams,” Epkey said.

The Grenadiers made a bid to take control early on as their two All-RSC selections in senior Brock Winchell (First Team) and freshman Cade Burman (Second Team) breezed by Faundez and Thorben Waldburger 6-2 to take the top doubles flight. The other two doubles courts looked to have the advantage as well, as the true freshman duo of Connor Mason and Michael Wright at #2 doubles and sophomore Jerid Inman and freshman Sebastian Burman at #3 doubles each held slim 4-3 leads.

Those edges did not hold up against the Red Wolves as Manuel Roman and Francisco Faundez roared back to win 7-5 at #2 doubles. Fueled by the comeback, Adrian Martinez and Moises Goncalves followed suit by defeating Inman and Burman 6-4, giving the Red Wolves an early 1-0 advantage in the match after claiming the doubles point.

“IU East has been a good team in both the regular season and postseason, even when they didn’t have their top singles player in the regular season,” Winchell said. “For the match, it all came down to that doubles point.”

Despite falling into a 3-0 hole, the Grenadiers still brought their intensity to the remaining courts. After dropping the first set 6-1, Sebastian Burman roared back to take the second set 6-3 at #2 singles. While Inman was up a set at #5 singles and Winchell sent #1 singles into a third set, the timing ultimately doomed the Grenadiers as Francisco Faundez took the second singles flight in three sets, 6-1, 3-6, 6-2, and clinched the match for the Red Wolves.

The loss signaled the end of what was a strong five-year career for Winchell, the only senior graduating between both tennis programs.

“Knowing it was my last season I was just going to try my hardest and give it everything I had mentally and physically,” Winchell said. “I was playing horrible but I was just yelling after every point I won to try and cheer my teammates on.”

While the Grenadiers will miss Winchell’s leadership, they will still be in an excellent position over the next couple of seasons with the likes of Inman and the Burman set to take the helm. Epkey will also have the benefit of bringing in two top talents for the 2021-2022 season in Center Grove’s Seth Jasek and duPont Manual’s Brent Reynolds.

“I have faith that all our men are good enough to step up and fill in roles at the top of the lineup if called upon,” Epkey said. “Freshmen like Harris, Mason, and Wright all have the ability to strengthen their games over summer and come back stronger next season.”