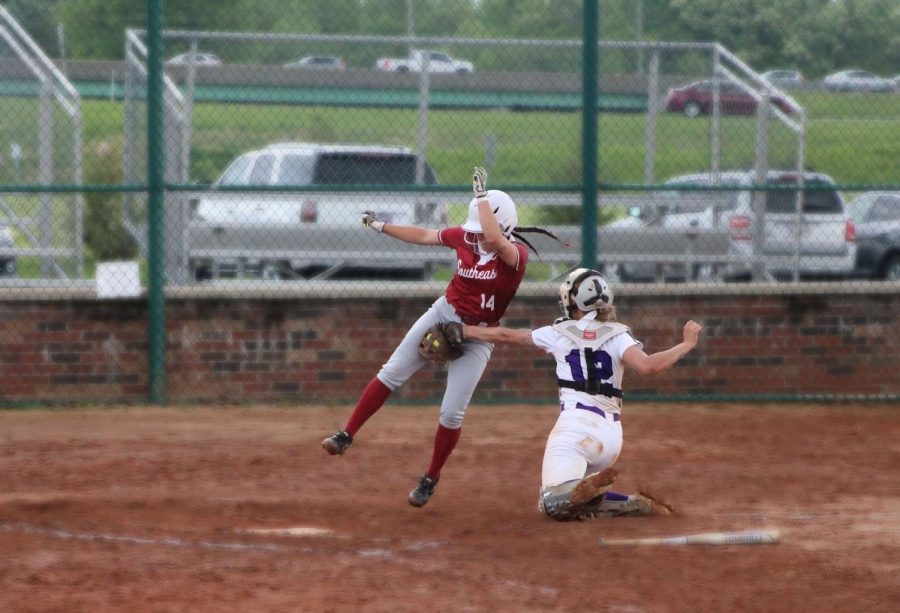 Freshman outfielder Brooklyn Gibbs gets tagged at home plate after a perfect throw from Carlow centerfielder Morgan Nedley, preventing the Grenadiers from scoring in the second inning of the nightcap of a doubleheader against the Celtics on May 3.

When the 2021 softball season began, the River States Conference picked IU Southeast and Rio Grande to finish the regular season atop the conference standings, with the Grenadiers edging the RedStorm by a small handful of votes. As the season progressed, the two squads battled for first place throughout.

When the two finally met in Rio Grande, OH, on April 25, hope on both sides ran high, as did the level of competition. The Grenadiers took the first game of the doubleheader 1-0 behind a complete-game shutout from junior right-handed ace Hannah Ogg and a first-inning RBI single from junior outfielder Madeline Probus. The RedStorm answered in the nightcap with a fourth-inning solo homer from Caitlyn Brisker, giving the RedStorm a 1-0 victory of their own as the two sides split the twin billing.

The result of the doubleheader eliminated two possible tiebreakers should the Grenadiers and RedStorm have finished with identical conference records, those formats being head-to-head record and runs allowed in head-to-head competition. As the Grenadiers prepared to host rival Carlow for their regular-season finale on Monday, May 3, they held the advantage in the third tiebreaker, which is a team’s record against teams in the opposite division. The Grenadiers, who compete in the RSC West, lost only one game against teams in the RSC East. The RedStorm, who compete in the RSC East, lost three contests against RSC West teams.

Just as the sky battled between clouds, sun, and rain, the Grenadiers were ready to battle the Celtics in a soaking wet field to ensure their postseason destiny. Going in, the Grenadiers looked to be the more rested team as the Celtics came in having played 18 games in 13 days due to a COVID-19 outbreak back in mid-April.

“[Carlow’s] been playing a lot of games lately and played a couple of good teams before us,” head coach Joe Witten said. “We just ran into a good team, they were hungry.”

As she had done all season, Ogg took the ball into the pitcher’s circle for the first game, looking like the pitcher who led the RSC in almost every pitching statistic for the first two frames. Despite Ogg’s dominance throughout the season, the Celtics’ Keyara Morgan led off the third with a deep double to left. The entire Grenadier defense moved inward against slap hitter Adrianna Gottheld, only for the ball to be slapped over the head of sophomore outfielder Miranda Miller and roll to the right-field wall for an RBI triple. With one out, McKenna Lampe bunted a slow roller near the first baseline, allowing Gottheld to score for an early 2-0 Celtics lead.

The Grenadier offense had difficulty getting anything going against Celtics’ starter Alysa Fairman through the first four innings but began to chip away in the fifth when freshman catcher Erin Templeman drew a leadoff walk. Freshman designated player Dallas Henderson followed by being awarded first base on catcher’s interference before junior pinch-hitter Maggie Lubbehusen drew a walk to load the bases. As the lineup turned over to the top of the order, freshman centerfielder Katie Templeman came through with a single to right, bringing home courtesy-runner Reecie Gilliam and pinch-runner Haley Smith to tie the contest.

The Celtics maintained confidence at the plate as Morgan Nedley doubled to deep centerfield to lead off the sixth. With one out and a 2-2 count on the scoreboard, Alexandrea Bupp poked a ball up the middle to bring Nedley home, giving the Celtics a narrow 3-2 advantage.

Despite getting runners on base over the final two innings, the Grenadiers could not capitalize against Celtics’ right-hander Morgan Pierce, who was perfect through the final 2.2 innings to give the Celtics a 3-2 upset over the Grenadiers. Despite scoring two runs, the Grenadier bats were frigid, mustering only two hits along with three walks. Ogg (28-10) took the loss despite going the distance, allowing three runs on eight hits, and walking two batters.

“It was probably my worst outing of the year,” Ogg said. “I came in with my back being a little stiff, nerves were a little bit of a factor, but that’s not a reason I can use for my performance.”

With the RSC Regular-Season title now out of reach, the Grenadiers looked to at least cap off the regular season with a victory as they began the nightcap. With this contest not having nearly as much significance due to the earlier loss, Witten opted to start junior right-hander Kasey Pearson in place of freshman righty Brooklyn Gibbs.

The lethargy that the Grenadiers showed offensively in the day game spilled over to the defensive end in the nightcap, committing an error in each of the first three innings. The Celtics capitalized on all three miscues, scoring a run for every error en route to an early 3-0 edge by the end of the third inning. While the Grenadiers had scoring opportunities early, the Celtics’ outfield stifled those hopes, gunning down Gibbs at home plate in the second before doing the same to freshman shortstop Macie Zink to end the third.

Pearson gave way to freshman right-hander Gabby Mahoney in the fourth, allowing only three hits over three shutout frames. Even with the improved pitching and defense in the middle innings, the slumbering Grenadier bats needed an awakening, which started with a brief dugout pep talk from junior first baseman Kelsey Warman between innings.

“I was saying that we needed to bring our energy and our focus, we can’t be thinking about what we did previously,” Warman said. “We needed to have a short-term memory, cheering each other on to pick it up and staying on top of it.”

The words of encouragement seemed to take root in the fifth when Gibbs and freshman third baseman Ellie Jackman led off with consecutive doubles to break the offensive ice. After Smith drew a walk and Mahoney reached on a fielder’s choice, Zink lifted a ball that landed just beyond third base to bring home Jackman and close the deficit to 3-2.

Warman soon practiced what she preached as she led off the bottom of the sixth with a double to right-center before moving to third on a Lubbehusen groundout to second. After Gibbs walked and effortlessly stole second, Jackman came through once more with a game-tying RBI single to left. Despite the Celtics ending the sixth, they could not end the Grenadiers’ offensive revival in the seventh, when Zink and sophomore second baseman Lindsey Nelson led off with consecutive doubles to put runners on second and third with nobody out.

The Celtics nearly caught a break when Warman lined out to third, the glove of third baseman Madison Lampe barely missing Zink on the catch as the freshman scuttled back to the safety of third base. That gave way to freshman catcher Natalie Schapker, who pinch-hit for Lubbehusen despite hitting only 3-for-14 with two RBI on the season. Schapker came through when she lofted a ball to centerfield, allowing Zink to trot home and end the regular season on a 4-3 walk-off victory.

“She’s probably had about a dozen at-bats this year,” Witten said of Schapker’s walk-off winner. “I’m proud of Natalie because she got to come in there and hit the sac fly to win it.”

Gibbs (9-2) worked the top of the seventh, earning the victory after walking one and striking out two. Pearson, Mahoney, and Gibbs combined to allow three unearned runs on seven hits, walking three while striking out five.

Despite not coming away with the RSC Regular-Season championship, Witten reminded his Grenadiers that all of their goals are still ahead of them. The loss only makes things slightly more difficult for the Grenadiers as they prepare for the RSC Tournament, which is set to begin on Thursday, May 6 at Jackson Memorial Park in Vienna, WV. The Grenadiers will need to win the tournament to earn the RSC’s second bid to the NAIA Opening Round.

“There’s always pressure as there always is when you’re a top seed and people expect you to win,” Probus said. “[Carlow’s] been on a little bit of a hot streak and they deserved that first game because they played well.”

For Witten, it doesn’t make much of a difference who they play once they set foot in Vienna. As the defending RSC Tournament Champions since it was last contested in 2019, Witten believes that this year’s squad has yet to live up to its full potential.

“We’ve always been successful when we’ve gone down there, even when we haven’t won it,” Witten said. ” I know we’re capable of doing it and I’m excited for the chance because you can’t prepare for one or two of our ladies because we have so many that can contribute, doesn’t matter who.”

The Grenadiers will help kick off the second round of the RSC Tournament against the winner of Midway and West Virginia Tech at 10 a.m. For more information on how to watch, visit the River States Conference’s website.