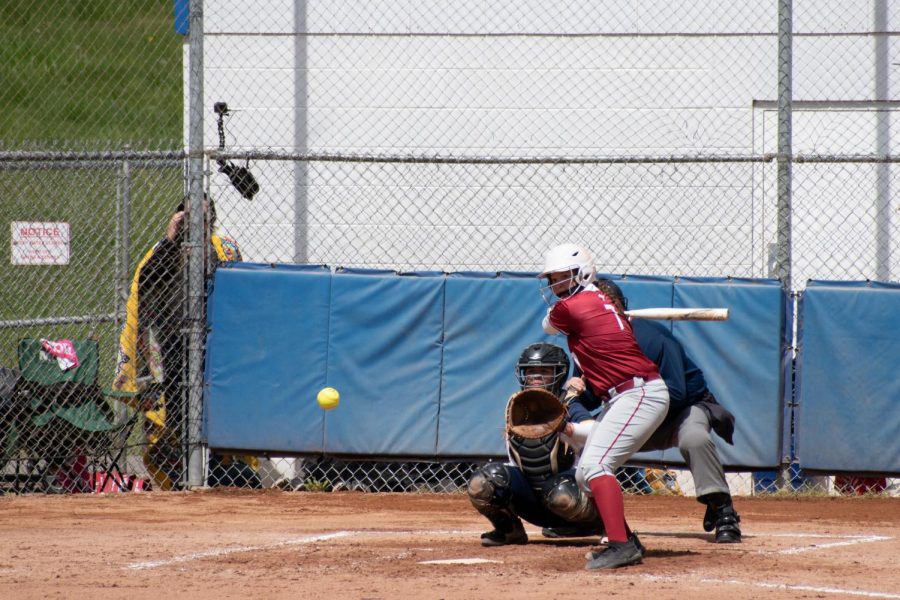 Freshman catcher Erin Templeman squares up against a fastball shooting down the middle of the strike zone against West Virginia Tech on May 15. Templeman went 3-for-10 with five RBI in the RSC Tournament, three of which came on a mammoth game-tying three-run home run against Rio Grande in the RSC title game.

After battling Rio Grande for the River States Conference Regular-Season title for much of the year, the IU Southeast Softball team was dealt a bad hand after splitting their final doubleheader of the year against Carlow. The loss in the first game gave the RedStorm the top seed in the RSC Tournament, as well as a ticket to the NAIA Opening Round.

The Grenadiers’ situation was only made slightly more difficult as they still secured the second overall seed in the tournament, allowing them to skip the first day of tournament festivities in Vienna, WV. When the Grenadiers first took the field on Friday, May 7, they began their winding road by exacting revenge against Carlow, shutting out the Celtics 8-0.

That set up the most anticipated matchup of the tournament as the Grenadiers confronted the top-seeded RedStorm. Despite sending recently-named RSC Pitcher of the Year Hannah Ogg to the circle, the senior right-hander could not hold the RedStorm offense at bay, surrendering five runs en route to a 6-2 RedStorm victory.

With the specter of elimination now looming over them, the Grenadiers’ only hope to prolong their season rested in the loser’s bracket final, where they faced West Virginia Tech. Despite the Grenadiers sweeping this very squad in a doubleheader on April 23, the Golden Bear pitching staff held the Grenadier offense to just three runs across two games.

“We knew it would be competitive because, during the regular season, [Tech] played us to a two-run and one-run game,” head coach Joe Witten said. “They’re always scrappy and we knew they wanted it, but I knew our team was empowered with the experience and determination to win.”

The Grenadiers held a 4-1 lead heading into the sixth with Ogg in the circle. Despite the right-hander’s dominance throughout the year, the Golden Bears rallied with two outs to score three runs, capped off by a game-tying two-run homer from Kay’Lee Justice. While Ogg concluded the inning by forcing a Savannah Bragg infield popup, the Golden Bears forced the Grenadiers into extra innings.

Freshman right-hander Brooklyn Gibbs replaced Ogg in the circle starting in the seventh but had a rocky start to her outing after walking a pair, putting the go-ahead run in scoring position. She escaped damage after forcing Brianna Stevenson to hit a two-out infield popup.

The narrow escape helped keep the Grenadiers’ fire burning despite failing to score in the seventh and eighth innings. With one out in the bottom of the ninth, senior outfielder Madeline Probus came up against Golden Bears reliever Courtney Miles, who allowed only one run over six dominant innings out of the bullpen. After quickly falling behind 0-2, Probus connected on the next pitch she saw to do what she had done only twice in her collegiate career; a walk-off solo home run over the centerfield fence to give the Grenadiers a 5-4 lead.

“I actually thought she was gonna throw a backdoor curveball, but I scooted up in the batter’s box and choked up a little on the bat so that I could hit the ball before it broke,” Probus said. “I’m definitely not a home run, I know that’s not who I am, but it just looked like a meatball coming down the middle of the plate, so I just swung.”

As the third-base dugout flooded out to mob Probus at home plate, the Grenadiers knew that the walk-off meant much more than a trip to the RSC title game. As the RedStorm made it to the championship as the league’s regular-season champion, the victory gave the Grenadiers the league’s second automatic bid to the NAIA Opening Round.

“She had been batting fourth most of the season, but I told Maddie before the tournament that it seems to come down to the seven and eight-hole hitters more than you think,” Witten said. “All you have to do is the ball up in the air with the way it was carrying in those mountains, she was just determined and wasn’t going to lose that battle.

While Probus’ first homer of the year lifted the weight of prolonging the Grenadiers’ season off their shoulders, the defending RSC Tournament champions now had to deal with the RedStorm, who began the championship contest undefeated in tournament play. For the Grenadiers to win their second straight tournament title, they needed to beat the RedStorm not once, but twice.

The task seemed daunting, yet the Grenadiers began that quest on a strong note as they took an early 1-0 lead on a first-inning RBI single from senior first baseman Kelsey Warman. After tacking on three more runs in the fourth, the Grenadiers realized how crucial those insurance runs were after the RedStorm scored a pair of runs in the sixth on a Morgan Santos RBI fielder’s choice and a Zoe Doll RBI single.

RSC Player and Newcomer of the Year Caitlyn Brisker followed with a one-out solo homer in the bottom of the seventh, cutting the Grenadier advantage to 4-3. Gibbs recovered to strike out Shelby Schmitt and forcing Taylor Webb to ground out to first, handing the RedStorm their first loss of the double-elimination tournament and forcing a winner-take-all finale.

“We’ve faced Hastings in the past and actually beaten her a couple years ago, so we felt like if they started her, we would have a really good chance to win,” Witten said.

Despite pitching the Grenadiers’ last 10 innings between the Golden Bears and RedStorm, Witten once again handed the ball to Gibbs for the contest. Having watched Gibbs work the previous seven frames, the RedStorm fired the opening salvo, scoring a pair of runs in the first on a Webb RBI double and a Kayla Slutz RBI single.

Entering her 12th consecutive inning of work in the third, Gibbs began to lose command, starting the frame by plunking Brisker to lead off. A Schmitt sacrifice bunt and a pair of wild pitches later allowed Brisker to score, extending the RedStorm advantage to 3-0.

“I was a little tired at the end, but my adrenaline kept me going,” Gibbs said. “It was a very high-intensity game and I had to do what I had to do to help my team out.”

The Grenadiers made their move in the top of the sixth courtesy of consecutive one-out singles from freshman shortstop Macie Zink and Probus. After getting freshman outfielder Katie Templeman to pop out to third, Campolo faced freshman catcher Erin Templeman. Despite facing one of the top pitchers in the RSC, Templeman took an 0-1 pitch for the biggest hit of her young collegiate career, sending it over the centerfield fence for a game-tying three-run home run.

“I was just trying to get on base, but I got an outside curveball,” Templeman said. “When I was running the bases, I was excited because I was trying to get my team pumped up, trying to get something going momentum-wise.”

With the momentum supposedly in the Grenadiers’ corner, Ogg started the bottom half by forcing Doll into hitting an infield popup and Lexi Carnahan to ground out to second. Her hopes of a scoreless frame were dashed on her first pitch to Cierra Clark, who took it over the left-field fence for a two-out solo shot and allowing the RedStorm to retake the lead.

The Grenadiers threatened to once again tie the contest in the top of the seventh after leading off with consecutive singles from Jackman and freshman designated player Dallas Henderson. Despite getting the tying run to third and the go-ahead run to second with one out, RedStorm reliever Caity Moody struck out Probus and forced Katie Templeman to ground out to short to secure the RedStorm’s fifth tournament title in the past six seasons.

“We were a squeeze bunt that was an inch, at the most two inches foul, away from going up one run,” Witten said. “Going into that last inning, [Rio] turned the tables, so it came down to a game of inches.”

While the Grenadiers failed their ultimate goal for the tournament, to say they left Vienna empty-handed is completely false. Alongside Probus’ walk-off sending the Grenadiers to the NAIA Opening Round for the second consecutive season, the Grenadiers had nine players selected to All-RSC teams. Ogg was a lock for RSC Pitcher of the Year after posting a minuscule 1.38 ERA prior to the tournament and being near the top of the NAIA in wins (28) and innings pitched (210.1) among numerous other pitching statistics.

With the RSC Tournament now behind them, the Grenadiers now prepare for an odyssey to Columbia, MO. for the NAIA Opening Round. As the third seed in the four-team Columbia Regional, the Grenadiers will begin the tournament by confronting a familiar foe in #9 Marian College.

The two teams share recent history, starting with the Grenadiers dropping a pair of tight contests against the Knights in the 2019 NAIA Opening Round in Springfield, MO. The two teams also squared off in a doubleheader at Koetter Sports Complex earlier this year, each coming away with a 6-1 victory to split the twin-billing.

Should the Grenadiers survive what will most likely be another postseason duel with the Knights, they will also have to contend with regional host Columbia College. The #7 Cougars come into the Opening Round at 34-5 and went undefeated in American Midwest Conference (AMC) play before earning a tournament berth as the conference’s regular-season champion. Rounding out the four-team regional is Mount Mercy (IA) as the regional’s fourth seed. The Mustangs (33-14) look to make some noise in their first NAIA National Tournament appearance in program history after emerging victorious from the Heart of America Conference Tournament.

Despite a pair of top 10 teams standing in their path, the Grenadiers look confident and poised to make history. Three wins are all that stand between them and a trip to Columbus, GA. for the program’s first-ever NAIA World Series.

“We have a lot of respect for Marian, and we know what they’re capable of,” Probus said. “But I also know that they should start planning for us because once we get going, you can’t stop us.”

The matchup between the Grenadiers and Knights is currently scheduled to be the second contest of the day on Monday, May 17 at 2:30, though the time may vary depending on when the contest between Columbia College and Mount Mercy ends.