Wallace had recently resigned as chancellor because of serious health issues. 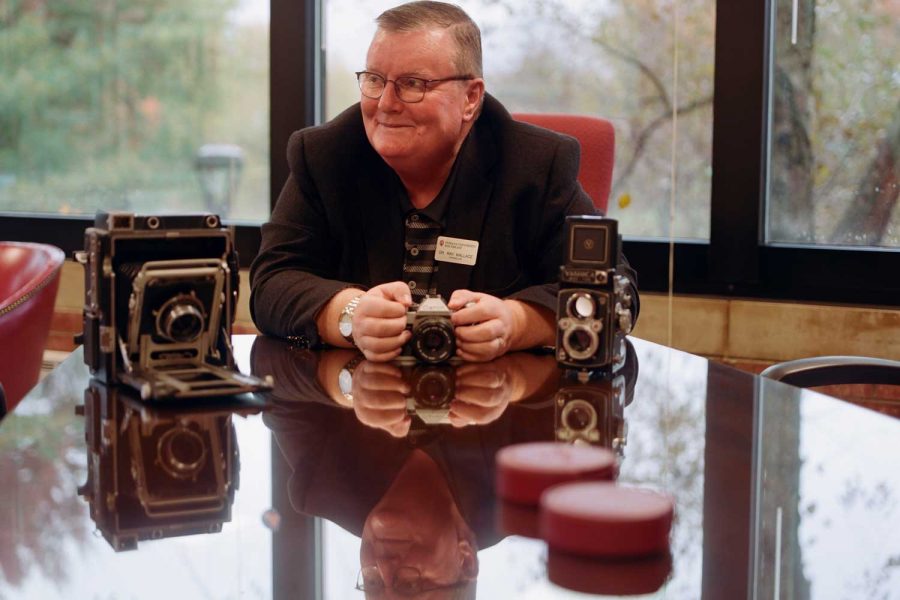 Former chancellor Ray Wallace sits in his office with some of his cameras. His death was announced Aug. 26.

Ray Wallace, a passionate photojournalist from Northern Ireland who led IU Southeast as chancellor for seven years before recently stepping down has died, the university announced Thursday.

“As a friend and colleague, I will miss him dearly, as I’m sure our campus will too,” Acting Chancellor Kathryn Girten said in an email to faculty and students.

“Dr. Wallace had a positive impact on the IU Southeast campus and throughout our community, and we all mourn his loss,” she said.

According to Girten, Wallace died after “suffering serious health issues.” Wallace, who was hired as chancellor in 2014, stepped down Aug. 1, citing his 20-year battle with kidney disease.

During Wallace’s time at IUS, he accomplished numerous achievements. According to the News and Tribune, he oversaw the launch of the Horizon Radio station in 2018 and boosted the number of academic programs on campus by 132%, including opportunities for remote learning.

He completed his undergraduate and master’s degrees there and later attended Illinois State University for his doctoral degree.

Prior to coming to IU Southeast, Wallace held numerous faculty and administration positions at several other universities, including the University of Hawaii at Hiloand and the University of Tennessee-Knoxville, the News and Tribune reported.

In his spare time, Wallace was an enthusiast of photography. He began shooting photographs at age 11 after seeing inspiration from war photographers. Even though he started young, he continued his love internationally. He traveled far and wide to take photos in countries such as Vietnam, Japan, China, Northern Ireland, Scotland, India and South Africa.

Even later in life he still shot photographs. Since he couldn’t draw, Wallace said, he did photography to keep himself mentally active. Wallace also said it was a form of escapism to blow off steam.

A celebration in remembrance of Wallace will be held Sept. 10 at 3 p.m. in The Ogle Center in the Stem Concert Hall. If anyone would like to attend virtually they can do so at this link: https://www.ius.edu/tributes/ray-wallace.html. Instead of flowers gifts can be made to the Chancellor Ray Wallace Memorial Scholarship. Checks are to be made out to the IU Foundation and sent to IU Southeast’s Office of Advancement with the memo line “Ray Wallace Scholarship.”

If students or faculty are in need of grief counseling over this tragedy please reach out to the Counseling and Psychological Services [CAPS]. They are currently closed in-person due to the ongoing pandemic but are available 9 a.m. to 5 p.m. Monday through Friday at (812)-941-2244