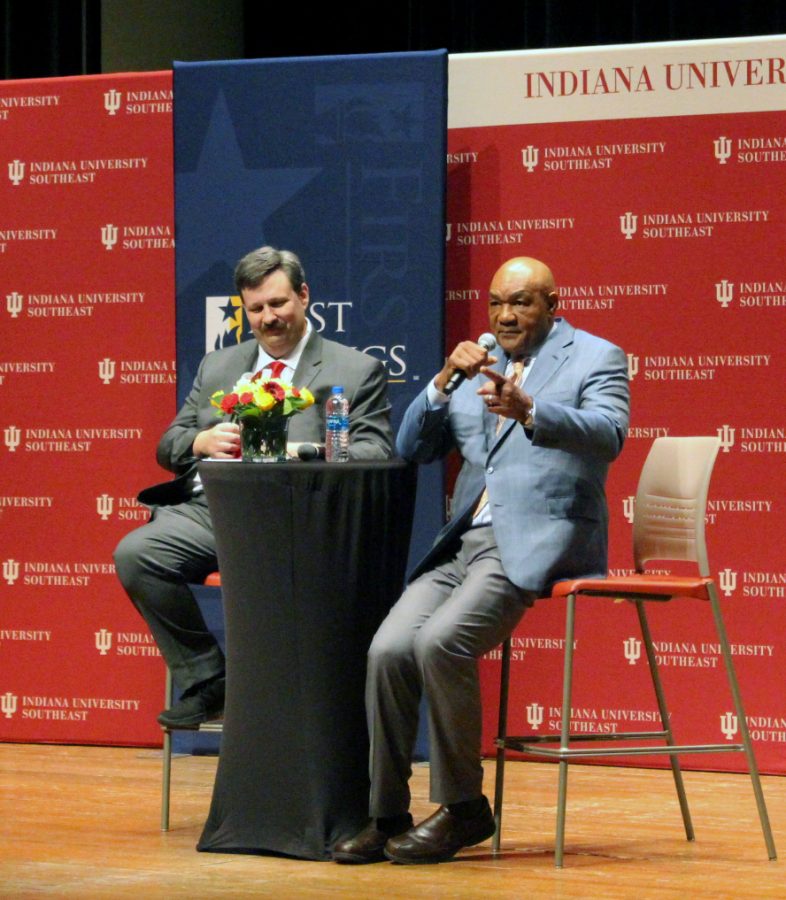 Dr. David Eplion, the dean of the school of business, left, and George Foreman, two-time heavyweight champion boxer and businessman, right, take questions from cards from the audience for Foreman to answer.

After two years of discussion between the School of Business and George Foreman’s group, the entrepreneurial grill salesperson and two-time heavyweight boxing champion of the world finally made his way to Indiana University Southeast to speak with the public.

Foreman’s theme for the night was “The Art of Fighting in Business and Life.” He brought forward three of his most important features to a successful career in anything: principles, the willingness to fight, and holding onto one’s convictions.

During his talk, Foreman discussed how he was brought up by a struggling family and reiterated how his parents always touted that there were no “thieves in the family.” This was followed by a story where, in his childhood, Foreman was being chased by police and had to hide underneath a neighbor’s house and cover his scent with mud from underneath the house.

“I had police dogs coming after me,” he said. “I had to think fast with all the leaking pipes dripping on me.”

This drove Foreman to hold on to his principles instilled in him by his family to never steal again. Another story, which brought forward his theme of having the willingness to fight, was from his time as a boxer.

Foreman, in his first bout as a boxer, quickly rose the ranks to fight Joe Frazier for the title of “World Heavyweight Champion of the World” in 1973.

Out of all the times he ever fought, Foreman said he was “afraid of going in the ring.” However, the one time he was not afraid was when he fought Frazier.

“The time I should’ve been afraid, I was not,” he said.

A year after becoming the heavyweight boxing champion, he lost the title a year later to Muhammad Ali in the “Rumble in the Jungle” in 1974. Foreman said he still had the fight in him to persevere.

The last theme of the night was conviction. Foreman said after being resuscitated in the locker room, his faith in God as a Christian was restored during his second career later in life as a boxer at 45 years old.

He later took questions during the event. Foreman said he used FaceTime while Muhammad Ali was still alive to talk to him about things outside of boxing.

However, he added that Ali called Foreman “crazy” for still wanting to fight decades later in their old age.

“He’s so funny,” Foreman said about Ali, “I never really got to see that side of him until now.”

Foreman released the George Foreman Lean Mean Fat Reducing Grill Machine in 1994, appeared in many advertisements and television shows, and recently has traveled all over the world to speak about the themes that have made him successful in life.