Get to know your SGA President and Vice President 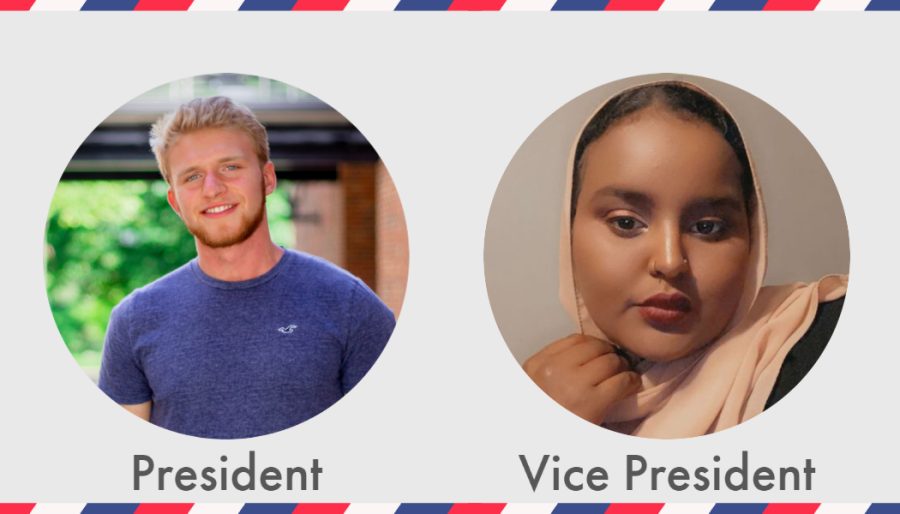 Photo of Dannon Olsen by Maho Sato. Photo of Sabrina Rashid provided by her.

From replacing outdoor basketball goals to getting food trucks on campus, the Student Government Association (SGA) works to make IU Southeast a better place for students.

Comprised of three branches, much like the U.S. government, the SGA has Legislative, Judiciary and Executive branches.

“As president, essentially what I’ve become is an intermediary between the administration and the students,” said Dannon Olsen, a junior majoring in political science.

On March 20, the SGA election results came in and re-elected Olsen as the president and Sabrina Rashid, a junior majoring in neuroscience, as the vice president.

Olsen was voted in by other SGA members his sophomore year as a senator to get behind the scenes of the campus and to get issues he saw to get addressed.

An issue Olsen has been trying to fix is the food issue on campus. He tried to get the cafeteria opened, but could not at this time.

With the cafeteria not being able to open, the SGA and Olsen started pushing for Papa John’s and Subway to open back on campus. They have also been asking for food trucks to come to campus.

One goal that Olsen has set for himself before graduating is to improve the amount of parking for students, especially the spaces closest to buildings. He is currently working with the SGA and the campus to slash the cost of parking passes.

Coming from the University of Louisville, Rashid was a part of their SGA before she transferred to IUS. She was then appointed as a senator in SGA and then served as press secretary.

“I’ve had experience with political stuff in general. I was a student council president in high school,”  Rashid said. “When I came here, it just felt right to join.”

One goal that Rashid had when she joined was to get the SGA more well-known on campus and to get more students involved with it. Her first step to making this goal happen is to get one person from each club to join the SGA.

In order to get club members interested, Rashid helped pass a bill that assisted clubs to pay their office and bank fee. Getting these fees covered would help these struggling clubs thrive on campus.

“I know what it’s like to have a passion and to be able to be in a group where that’s my outlet,” Rashid said.

The SGA president and vice president cannot write a bill, but they can sign them. They also can help student senators win passage on bills they write and sponsor.

If you have concerns about the school you want to address or if you are interested in joining the SGA you can contact Olsen and Rashid at olsendl@iu.edu and sadransi@iu.edu. Students can also visit them at University Center room 014.