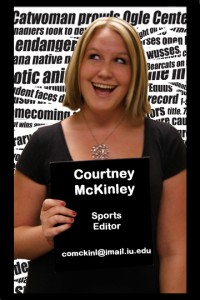 The Kardashians are great role models to society, Paris Hilton is a phenomenal actress and Nickleback is the best band ever.

Unfortunately, because I am writing a newspaper column, readers are unable to catch the sarcasm dripping from the previous comments I just made.

Sarcasm is one of the most dynamic qualities of my personality that I thrive on daily. Fortunately, my friends and family also hone this characteristic, and we are able to playfully torment each other regularly.

However, I am surprised and displeased by the fact that I have personally interacted with others who, even in adulthood, have never learned how to utilize or understand the greatness that is sarcasm.

Not only do some of these individuals not understand sarcasm, but they also seem to lack any sense of humor at all.

I often wonder how anyone is able to go through life without encompassing some form of humor to get them through a dull or, perhaps, terrible day.

I understand people get in such bad moods that a clever “that’s what she said” joke or humorous image on imgur.com can’t fix it, but I do not understand how someone cannot possess the natural ability to crack a joke every once in a while.

Recently, an acquaintance of mine did not “get” a sarcastic comment I made to her. She ignored the obviously joking tone to my voice and was offended by something she implied by my comment, not by something I actually said to her.

Of course, I immediately felt terrible because she misconstrued my sarcastic comment into, what she thought, was a jab at her.

However, shortly after, I stopped feeling bad and felt irritated that she was able to twist my already twisted sense of humor into something mean-spirited and extremely inaccurate.

I later learned this individual was just very sensitive and reacted the same way to wry comments made by our mutual friends, as well.
By this experience, I learned the hard way that you have to be careful who you joke around with.

I know there is a fine line between making crude, sarcastic comments for joking purposes only and actually intentionally hurting another person by what I say.

I have witnessed this line being stomped over countless times, but, fortunately, a lot of people have acquired a thick skin to semi-harsh humor and know it is more appropriate to throw a clever comeback instead of getting upset.

As a lot of social circles, my friends and I have the common interest of ridiculing each other to get each other to laugh. With each friend, we all have a stereotypical “fault” that we poke fun of. Mine is my shameful ditzy comments.

Growing up, my friends and family would always use “dumb blonde” jokes as ammo to my psyche. Hell, my mom still likes to say, “It’s OK, Courtney. You’re pretty” after I make a less than intelligent comment. To which I sarcastically reply, “At least I’ve got that going for me.”

Instead of getting angry or taking offense, I laugh it off and either add to the previous comment or spit a distasteful and overused “your mom” insult.

What aggravates me more than someone who lacks humor is someone who readily mocks an individual but instantly becomes defensive when they are, in return, taunted.

As the old saying goes, “if you can’t take the heat, stay out of the kitchen.” This translates to, if you are unable to take a joke, then don’t be a jerk in the first place.

There is a time and place for everything— humor included— and I know that my humor is not often permitted within a  professional environment, unless provoked by my coworkers, of course.

I hardly ever tone my sardonic humor down, let alone eliminate it completely based on a social situation.

Luckily, sarcasm has become a prime form of humor and communication in today’s society, and I am rarely required to limit my satiric wit.

One of the only limitations regarding the use of sarcasm should involve professors. Students should never be intimidated by professors, but it definitely happens and it does not help when that professor is cynical and rude.

I have encountered several professors at IU Southeast who insult students and make snide comments just to intimidate the class. No one likes being teased by someone they hardly know, especially by someone who ultimately controls their grade for a class and possible future recommendations.

On the other hand, I have had classes with the same professor for seven semesters in my college career, and I know him well.

He has mastered sarcasm and instructed many lessons with the aid of satire, but he has never used his witty comments at a student’s expense.

Sarcasm should be utilized when one knows the other individuals involved or at least know their style of humor.

If not, one may consider adjusting their slightly more aggressive humor.

Unfortunately, I have not quite grasped how to act around children. I have the hardest time interacting with them solely because of their inability to comprehend sarcasm.

Therefore, I try not to communicate with them in the first place.

Do you see what I did there?

If I was allowed, I would place asterisks around the word sarcasm to show the tone of that statement.

Sarcasm is a privilege, not a right. Use it appropriately, intelligently and, especially, hilariously.