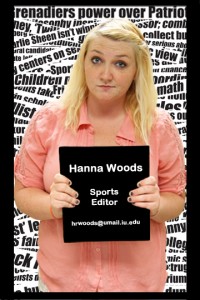 Late in the ninth inning, Aroldis Chapman stands on the mound and sends a 99 mph fastball toward the Dodgers’ Hanley Ramirez.

Ramirez sends a bouncer straight into the mitt of second baseman Brandon Phillips. Phillips passes the ball over to Zach Cozart and Cozart to first baseman Joey Votto for a double play to end the game, making the Reds the National League Central champions.

For the second time in three years, the Reds have clinched the National League Central title, but, unlike their 2010 showing in the playoffs, this year the team is ready.

The  2010 Reds’ team showed up to the playoffs surprised and inexperienced, and they got swept in three games by the Phillies.

This year, they have the knowledge and experience to prove that the Reds are one of MLB’s most underrated teams.

The Reds have held the best record in the NL for the majority of the season and even had a stint in the top spot of the entire MLB.

The key to the success of the 2012 Reds can only be accredited to one man, Dusty Baker.

Baker, who is currently recovering from a minor stroke suffered during the Cubs series in Chicago, has caught much flak for some of his “unorthodox” choices as manager.

Unorthodox or not, Baker has proved that he knows what it takes to put marks in the win column for this team. One thing nobody can deny about Baker is that he knows how to build a good team, y’all.

The road to the playoffs for the Reds has not come easy. The team has suffered a list of injuries this season, including the injury that could have lost it all in mid-July when Votto underwent two surgeries to repair torn cartilage in his left knee.

That is the beautiful thing about this Reds team: the ability to win does not rely on one strong player.

The team is full of capable players that can step into that MVP spot at any time, from veterans like Phillips, right-fielder Jay Bruce and outfielder Ryan Ludwick, who established himself as a go-to hitter, to rookie Todd Frazier who can play first-base, third-base, pretty much anywhere on the field.

This team is rock solid in terms of the depth of their players, but, in order for them to win, Votto is going to have to step back up as a leader of the team and find his stride again.

Since his return, Votto has failed to homer and has barely made any contact with the ball. This is not typical behavior coming from the man who had a 15-game hitting streak. Let’s hope the playoffs bring out the best of the first baseman.

Let’s not forget the strength Baker has built in the bullpen. For a man who has been accused of ruining the arms of many pitchers, Baker has found his security in this Reds bullpen.

Starters like Mat Latos and Johnny Cueto have stepped up, securing a defensive lead over their opponents.

While the relievers, who currently have the best ERA in the majors, are coming in and securing victories.

Chapman has successfully stepped into the role as closer and saved 36 games for the Reds this season.

After a struggling September, the Reds are going to have to make some changes if they want to win big in October.

With 94 wins this season, sitting one game behind the Nationals for the MLB’s best record, the Reds will head in to their final series of the season against the defending World Series champions the Cardinals in St. Louis. The Cardinals will be fighting for the wild card spot, while the Reds will be looking to further prove they are worthy of MLB’s most prestigious title.

So get well Dusty, after missing the chance to celebrate the NL Central clinch, I think we are going to need you ready to celebrate with your team very soon.

It has been 22 years since the Reds last won the World Series, and they stand a damn good chance this year.

Either way, you’ve made me proud, boys.