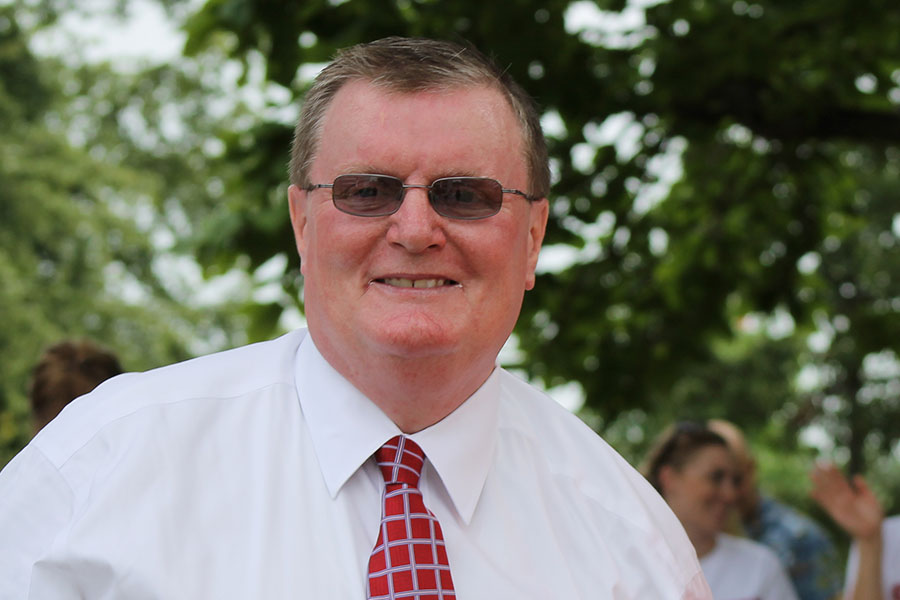 On Friday Dec. 5, Chancellor Ray Wallace will walk onstage at The Ogle Center in full regalia. In the crowd will be IU President Michael A. McRobbie and the chancellors of each IU campus. His family and friends will be in attendance, as well as coworkers from a near 30-year career in education that has spanned the country. They will be there to honor him. But before he is formally acknowledged as the leader of IU Southeast, Wallace says he will quietly take a moment to reflect on the long path to this stage, and his Installation Ceremony.

“That is a big achievement for me,” Wallace said. “I’m a kid from the ghettos in Belfast and I’m about to be officially recognized as the chancellor of a great university.”

And once that moment is over, he says he’ll be back at work.

It has been a busy first semester for Chancellor Wallace, who took over as head of IU Southeast on July 1 of this year. Since then, he has been focusing on ways to increase enrollment, expand online class offerings and modernize the campus. He has met with city leaders to find ways to better integrate IUS into the community, and has met with local officials from other colleges to better insure a seamless transition into IUS for transfer students.

“I love my job,” Wallace said. “Are there times I come in and think that there aren’t enough hours in the day? Yeah, but I have a staff that manages me pretty well.”

Vice Chancellor for Administrative Affairs Dana Wavle says that Wallace was selected to his post because of his years of experience and strong leadership qualities. Those assets along with his decisive manor and clear vision for IUS have resulted in a fast-paced start to his chancellorship.

“He has gained a quick and thorough understanding of the campus and what we need to do to move forward,” Wavle said. “He definitely hit the ground running on July 1.”

Despite a whirlwind first semester, much of Wallace’s vision for IU Southeast is still coming into focus. He says that he is impressed with the enthusiasm of faculty and staff to embrace change around campus, but admits lasting change will take time.

“The work that faculty is doing right now is going to pay dividends for years to come,” Wallace said.

Wavle says that IU Southeast has lost almost 1,000 students in the last four years, down from a peak enrollment of 7,200. He says that stabilizing and eventually growing enrollment is a major part of solving a revenue shortfall in excess of $1 million that IUS is facing this fiscal year.

To fix the enrollment decline, Wallace says the administration has hired a new director of marketing and communication, Steven Krolak, from SUNY Plattsburgh. Wallace says that Krolack, who, according to his bio, has a background in “freelance writing and strategic communications for corporate and nonprofit clients including Conservation International and The Cousteau Society,” will be crafting a marketing plan that includes specific analytics.

Wallace said that he and Krolak agree that IUS must change its message by directly marketing the strengths of the university to specific individuals. For example, instead of having an ad with the picture of a generic college student placed in an airport full of business travelers, the ad should boast statistics about IU Southeast’s highly rated MBA program.

The chancellor and his team have already begun reaching out to local high schools. Wallace said that Harrison County High School, as well as others, have shown interest in a Bridge to Success program that would allow students to take IUS classes at their high school. IUS professors would be teaching these courses and would introduce young students to the university.

Wallace said that attracting nontraditional students, transfer students as well as working adults is a large piece that could be a boom to enrollment. He said that IUS is on the cusp of signing exchange agreements with JCTC in Louisville and Ivy Tech in Indiana that would allow the transfer of credits to be more seamless. He said he does have concerns, however, about IUS’s ability to accommodate working adults who may come to the school hoping to finish their education.

To help identify and problems in the process, the chancellor says he plans on using “secret shoppers” that will go through the procedures of registering, finding out about financial aid and what degree programs can fit into a working adult’s schedule. Wallace hopes these efforts will confirm that future students have their questions and needs met.

“I want to make sure that when we market this widely, that we are in fact living up to what we say we can do,” Wallace said.

Three years ago, Wavle says, IU Southeast was last out of the five IU regional campuses in terms of its online offerings. Now, both Wallace and Wavle say that IUS has moved up to second.

There is a new program called Indiana University Online Class Connect, which Wavle says will allow students from other IU campuses to take classes at IUS, and vice versa. Wallace says IUS is up 47 percent in its online class offerings and that number should increase.

“We don’t want to be a completely online school,” Wallace said. “Who wants that? But there are some programs down the road that will be much more online than not, given the market that will take them.”

According to campus housing, IU southeast lodges are currently near capacity. Wallace say that officials from Bloomington recently visited campus and that the administration has approval to begin exploring the construction of a new lodge. The chancellor said he is cautiously optimistic that officials may be able to break ground on a new lodge within the next two years. The variables, he says, are acquiring proper funding and monitoring how the soon to open University Commons apartment complex affects lodge occupancy.

“I don’t want anybody to think that we wake up one morning and decide to build a classroom building,” Wallace said.

Perhaps the most ambitious desire is to construct a new student recreational center.

“Everyone knows we need it,” Wallace said. “But these facilities are not cheap.”

He said that a new center would have to be privately funded, but that he plans on calling a group together, including some students, to decide what the building would house.

He says it should include opportunities for student professional development, like an internship office and a place for students to participate in mock interviews. It would also include places for students to work out, play racquetball or simply jog.

In building a new student recreational center, the hope would be to attract conference and high school championship games to campus, further intertwining IUS into the community.

‘My vision is grandiose. I admit it,” Wallace said. “We should be able to provide all students a place to develop body as well as mind.” 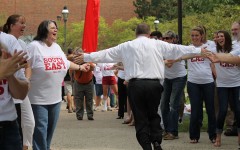 Dining Services also recently sent out a survey that could lead to some changes in offerings.

Chancellor Wallace attended the Wonderland Way art exhibit opening last week, but it was hardly the first time he has been in Knobview Hall.

“He has been thoroughly enjoying The Ogle Center events,” Wavle said. “What’s neat is that after the performance he will go downstairs and greet each person as they leave.”

Wallace said he recently attended a bluegrass performance in the Ogle Center but would like to see more events in the new amphitheater. Wallace envisions an outdoor concert series catered to the tastes of students.

“It would be nice to fire up some bar-b-q and get some lawn chairs out and listen to some decent music,” Wallace said. “God forbid, I would even listen to some rap.”

Stephon Moore, Student Government Association President, said Wallace has created a culture of openness that shows he is receptive to new ideas, even rap.

“He is allowing people to voice their opinions and be a part of the process,” Moore said. “He has started a conversation on how to make the school better.”

That conversation has led to lofty objectives, and lots of work, but Wavle says that the chancellor puts his staff at ease with his leadership skills and sense of humor.

“I’ve always enjoyed coming to work but I really enjoy coming to work now,” Wavle said. “You know that it is important to work hard and show a high level of commitment and dedication, but you can have fun too.”

When Chancellor Wallace walks off of the Ogle Center stage at the end of his Installation Ceremony, it will mean that his first semester as the leader of IU Southeast is nearing an end as well. While he might take a moment to reflect on how he got here, he said he is much more excited about the road ahead.

“It’s about me, but really it’s about this campus. It’s a celebration of the next generation of leaders,” Wallace said. “It’s about moving forward.”

In addition to attending the chancellor’s Installation Ceremony, the IU Board of Trustees will be holding meetings Thursday and Friday on campus. All meetings are open to the public, except for the Executive Session.