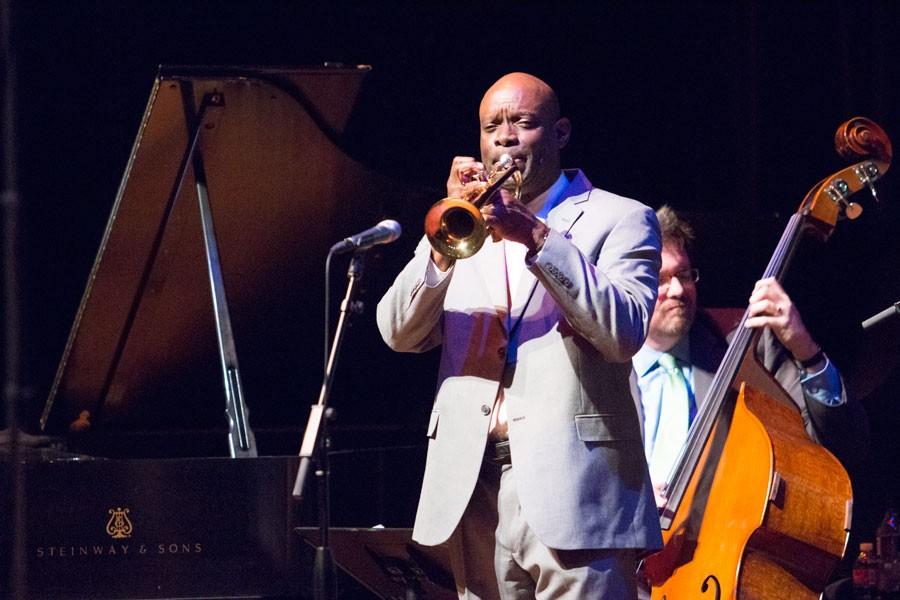 Trumpet Player, Spoken Word Ron McCurdy playing his solo during one of the moods in the multimedia concert.

There are many platforms one can utilize to express their political or personal views about ongoing issues of justice, freedom, culture, or civil rights. Some sing, dance, rap, paint and others can convict some in the audience with poetry, with spoken word.

IU Southeast gave graduate and undergraduate students the opportunity to express their concerns in a slam poetry contest. Contestants were asked to submit an original, unpublished poem that was no longer than 600 words. Poems submitted were to be inspired by themes of Black History Month, justice, freedom, culture, liberty or civil rights.

Students and winners of the contest Matthew Haskell, Kataria Berry, and Hannah Noble performed their contest poems alongside of the Ron McCurdy Quartet Thursday, Feb. 18, during Diversity Week at IUS.

The Ron McCurdy Quartet performed as accompaniment for the poets and the Langston Hughes Project multimedia concert.

Michael Jackman, senior lecturer in English, said that this was the first time the Langston Hughes Project was invited to IUS. He went on to explain that it was also the first time that winners of the poetry slam contest performed their contest pieces with the accompaniment of the jazz quartet.

“As the Academic Affairs Diversity Coordinator I was keeping an eye out for a group to invite to campus to celebrate diversity in a cool and educational way,” Jackman said.

After receiving a query from Dr. Ron McCurdy, director of the Langston Hughes Project, Jackman corresponded, researched, fundraised and invited McCurdy to IUS.

“They were available during Black History Month and are making an interesting presentation of an important poet of the Harlem Renaissance, so it seemed like a lucky opportunity,” Jackman said.

Matthew Haskell, English junior, said he participated in the contest to share his complex message of how the Band-Aid effect doesn’t work for just anything.

In Haskell’s “Silent Voices,” he talked about how the American justice system still contains many aspects that make it a racist entity by keeping minorities down, specifically African Americans. He said that the overbearing amount of incarcerated black men can be traced to simply doing so for a profit rather than punishment fitting a crime.

“The poem dabbles into the concept of complexion and how each is beautiful, and being black should not contain a negative connotation, but instead should be synonymized with pride,” Haskell said.

He hoped that people would be part of the answer in getting people to understand that it will truly take generations of future Americans to dismantle the concept of racism.

“Hatred is taught and ignorance perpetuates that,” Haskell said. “Try to understand another person’s shoes and situation.”

Kataria Berry, pre-nursing junior, said she entered the contest because she wanted to be a part of her own kind of black history.

“I wrote this poem and entered it so my voice could be heard not only for my own race but for all races to understand we as a race are not just whining about what has happened and is happening to us,” Berry said.

Hatred is taught and ignorance perpetuates that. Try to understand another person’s shoes and situation.”

Berry said that she started her poem “We’re Living in a Jungle” when the death of Sandra Bland happened.

According to CNN, Sandra Bland was a 28 year old African American woman that was arrested for allegedly not using her turn signal. The article explained that Bland was found dead in her cell a few days after she was arrested.

“Over the past few months I saw things happening around me, and knew it was time for my feelings to be put on paper,” Berry said.

She said that it brought up the past, what African Americans experienced years ago.

“The beatings and brutality that’s been happening is sadly repeating itself,” Berry said.

“We are fed up with it,” Berry said. “If we come together and stand against those who abuse authority or hate someone because of the color of their skin maybe they would change their ways.”

Hannah Noble, elementary education junior, said she found out about the contest through the school email. Noble said that she sent in a poem she made in a short period of time and she said she got an email back saying she won.

According to Noble, her poem, “The Ships,” was to be looked at from a historical standpoint of how deep prejudice continues to be in the United States.

“My ancestors came across to America on a ship,” Noble said. “They were excited; it was like going to the promised land.”

But Noble stated how others were forced to come across on a ship, and not for the same reason her ancestors did.

“It symbolizes different people’s heritage, which are major issues for us,” Noble said.

According to the Langston Hughes Project website, this was a multimedia concert performance of Langston Hughes’s kaleidoscopic jazz poem suite. The website said it was Hughes’ homage in verse to the struggle for artistic and social freedom in America and abroad at the beginning of the 1960s.

“Ask Your Mama” was a 12-part poem which included scores of music cues from various genres of music. It was dedicated to musician Louis Armstrong and was created after his participation as an official in the 1960 Newport Jazz Festival.

Leo Lopez , sociology freshman, said that he enjoyed Hughes’ poetry throughout the concert.

“You don’t understand poetry until you’ve heard it,” Lopez said. “Things he talks about, you vicariously live what he describes.”

Marc Mullens, English Writing senior said that he thought the slam poets did a good job.

“They’re a good testament to what poetry culture at IUS is,” Mullens said.

As for the project concert, Mullens said that he thought he caught the entire mood for what jazz was like for Black Americans.

“This brought energy to what jazz is and why Langston Hughes is so important,” Mullens said.