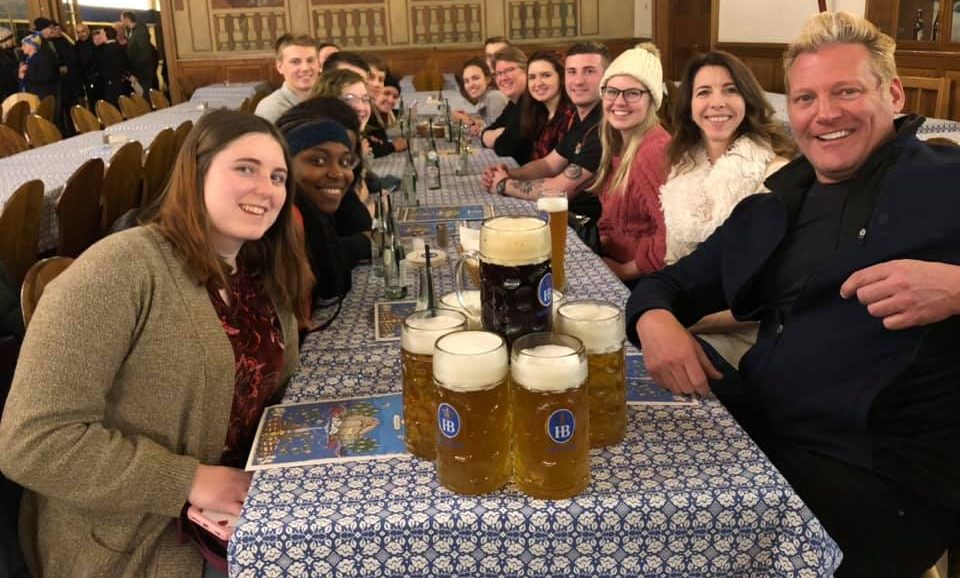 Guten Tag, Grenadiers: The benefits and advantages of taking German at IUS

Imagine living in a German-speaking country like Germany, Austria or Switzerland and making a previously unknown country your home and flawlessly blending in with the locals.

Now imagine immersing yourself into a culture rich with unique cuisine, customs and traditions.

All of that could be possible for students who decide to take German courses for their foreign language requirement.

German is one of the four foreign languages currently offered at IU Southeast. While German may not be as common a language to take at IUS as Spanish or French, the benefits, unique aspects, and interesting culture that go along with the language have made the experience entirely worth it to students.

The small class size is one of those benefits.

Stefanie Schy, an IUS alumna and former German student, said that one of the main reasons she picked German as her foreign language requirement was because it wasn’t as common of a language to take.

“Some years my classes would have less than 10 students,” she said. “It really allowed the professors to get to know you and give personal help. It was kind of like having a private tutor at times.”

Schy is not alone in knowing the appeal of taking German. According to the Modern Language Association, German comes in at number four on the listing for the top foreign languages studied in American institutes of higher education. While 5.7% may not seem like much compared to the respective 50.2% or 12.4% for the Spanish and French languages, the personal and professional advantages of German appeal to students both at IUS and at other universities across the country.

Cole Hendrix, a junior double majoring in history and political science at IUS, said that the similarities between German and English were what drew him to taking the language.

“They are both Germanic languages and share a lot of similar words, so learning the basics is very easy,” he said. “You’ll continue to notice similarities well into the advanced portions of the language.”

Hendrix also said he has learned a lot over the four semesters that he had been enrolled in his German courses thanks to Professor David Domine, one of the few professors currently teaching German at IUS.

“The most important thing Professor Domine has taught me is the importance of actually practicing a language on the fly to understand the tenses and conjugation better,” he said. “He is also great about bringing up and using past material so you don’t forget the basics.”

How German Can Professionally Benefit Students

While Hendrix originally took German just to fill his foreign language requirement, he said that eventually he realized how the language would benefit him on a deeper level.

“Ultimately, I realized that learning a second language is an important skill set for anyone to have,” Hendrix said.

Learning German not only has personal benefits, but it also has professional benefits as well.

“It would be useful to someone to learn if they want to travel and experience culture in Germany, Austria, or Switzerland,” he said. “It can also be useful in some business fields such as automotives or banking.”

Schy, like Hendrix, said that she believes German can be useful for students pursuing certain careers.

“Professionally, knowing another language can be a huge benefit to help bridge a communication gap,” she said. “Imagine how much better a doctor could provide care for a patient if they were fluent in the patients’ native language.”

Professor Domine agreed with his students, mentioning that German can be one of the best languages to learn if you are interested in having a successful career in a few different fields.

“There are certain disciplines where German is considered an asset in business, for example, chemistry, philosophy, engineering,” he said. “If you know German, it kind of gives you a leg up in certain careers.”

If students taking German are interested in furthering their experience with the language, they can utilize the study abroad programs that IUS often promotes.

Domine, who is a program director for the Paris-Munich winter trip for the Kentucky Institute of International Studies, also said he encourages students to look into study abroad opportunities outside of what IUS offers as well.

He himself studied abroad in Graz, Austria while completing studies in literary translation at the Karl-Franzens Universität. He ended up living there for five years.

“What I always tell my students is that going and studying abroad can be impactful in that you’re getting such a rich experience,” Domine said. “You’re having that daily interaction. You’re growing as a human being and learning more as an individual.” 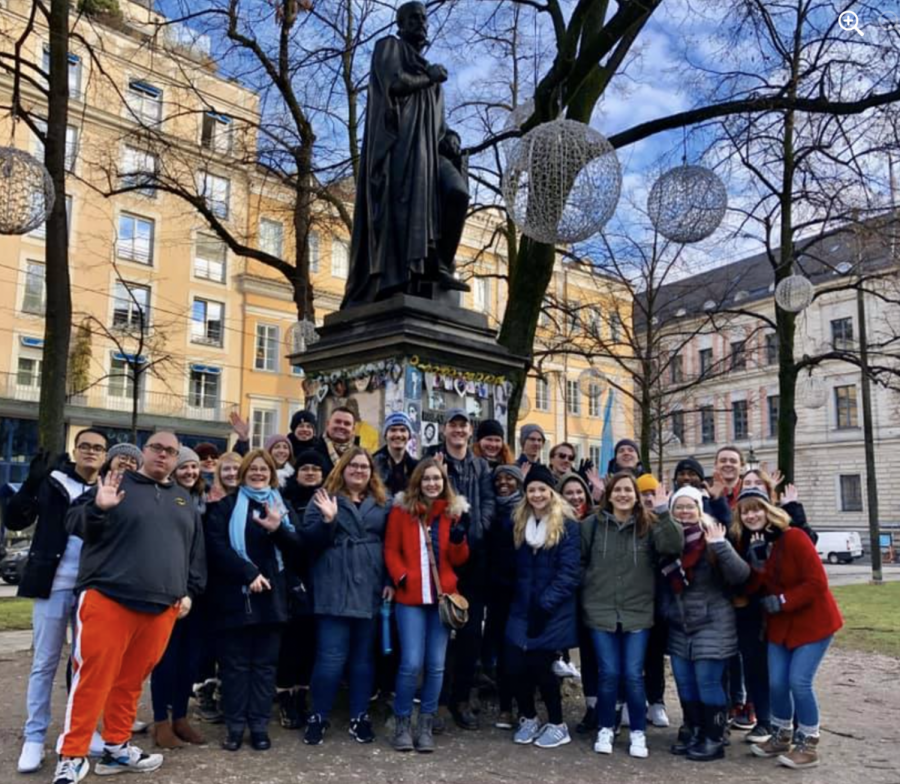 Gallery|5 Photos
Some of David Domine's students pose in front of a makeshift memorial for Michael Jackson in Munich, Germany. Photo provided by David Domine.

While Schy did not travel abroad while she was in school, she had the opportunity to utilize her German skills while on her honeymoon after going to a small brewery two hours outside of Munich where not much English was spoken.

After touring the brewery, Schy found out that her entire group and her driver had left, which left her and her husband without a way to get back to where they were staying.

“I had to get us back to the train station to get back to Munich,” she said. “So, we walked over to a grocery store and I finally got to put my years of German study to use.”

Advice for Being a Successful German Student

Both Schy and Hendrix have advice for students wanting to take German as their foreign language.

“Everyone in the class is starting with minimal or no knowledge of the language,” Schy said. “Go easy on yourself.”

In his advice, Hendrix mentioned the importance of getting help and assistance when needed.

“Don’t be afraid to ask your professor for help,” he said. “You don’t ever want to fall behind in a language class, because it can be hard to catch up, especially due to its nature of building on previously learned material over multiple semesters.”

For students who make sure to ask for help and go easy on themselves, success will be within reach. Hendrix is a prime example of that.

“I’ve actually loved my time in German class a lot,” he said. “It’s a useful skill for someone to have. It is also another way to stand out on a resume or application.”

While there are many reasons to consider taking German courses, one could be a little more personal and closer to home for some students.

“Many Americans, especially in southern Indiana and Louisville, have German heritage, they have a German background,” Domine said. “So, for many people, it’s kind of a way of connecting with their heritage and finding out more about where they came from.”

On a less personal level, Domine said German is a practical language that allows students to expand their worldview and learn more about other countries.

“We’re not the only country out there, we’re one of about 200 countries on the face of the planet,” he said. “Right now, there’s other languages, there’s other cultures, there’s other religions. I just think, as a human being, it’s good for you to know about other places and be conscientious that people might speak a different language, they might think differently, and they might have different customs and traditions.”

“Learning languages makes you a more well-rounded, a more balanced human being,” he said. “And as a student, it enhances whatever discipline you’re focusing on, and it’s a sign of someone wanting to be aware of what’s outside their own country, I think.”

For students like Hendrix and Schy, German classes allowed them to easily enter the world of foreign language while learning about new cultures and countries.

“I find German to be an easier language to learn for native English speakers than Spanish or French,” Hendrix said. “I’d encourage anyone to take a foreign language.”

In addition to the convenience of learning German as someone who speaks English, Schy mentioned how the other aspects that go along with the language can be beneficial as well.

“I believe learning another language allows you to really immerse yourself in the culture and lifestyle,” Schy said.

Domine said that he hoped students would be encouraged to take foreign language courses at IUS. As one last additional benefit, he mentioned that German cuisine would be involved for students interested in taking his classes.

“Take a foreign language, it will make you a better human being,” he said. “Specifically take German if you want some good food. Take my class, and I’ll make you good things to eat.”