IUS Spanish professor Mindy Badia (right) poses in the classroom with two of her students. Photo provided by Mindy Badia.

IUS Spanish professor Mindy Badia (right) poses in the classroom with two of her students. Photo provided by Mindy Badia.

A young woman once took a trip to Madrid, not knowing the adventure that awaited her. While visiting an old friend, she was whisked away on a journey to help find her friend’s father. She traveled to his hometown, still not knowing what to expect.

After speaking with the taxi driver and finding out that he knew her friend’s father by name, the young woman was able to experience the father-son reunion firsthand. If she had not known Spanish, she would not have been able to partake in that experience.

That young woman, Professor Mindy Badia, now teaches students all about the Spanish language and culture at IU Southeast. She has been teaching at the university for over 20 years.

“I’m one of those strange people who will read a sentence in Spanish and think that it’s the most perfect combination of words and sounds that a human could come up with,” she said. “It’s almost like a spiritual experience for me.”

One of Badia’s former Spanish students, Marie Johnston, shared what initially drew her to the language.

“I took Spanish for a variety of reasons, though part of it seemed like fate as the opportunity practically blossomed in my lap,” she said. “I love learning about how other cultures have raised their communities, and learning their language is one of the most revealing ways to do that.”

Multiple aspects of the language interested Johnston, including grammar and literature.

“In the earlier grammar classes of a major you get to see how native speakers pull pieces from the world around them in order to portray their ideas to others,” she said. “And then through higher level courses learning literature, art, and history, we get to observe how the culture may vary or share similarities to our own based on what the language lends to observing.”

Learning Spanish may seem intimidating to incoming students, but Johnston advised students to set aside what they know about Spanish by already knowing English.

“Let go, just a little bit, of your need for what you’re learning to make sense in English,” she said. “Your connection to the world through English will not be threatened by learning a new language. In fact, it will be even more developed and articulate.”

While Johnston was learning more about the Spanish language, she was also building up relationships with her classmates and professors. When she was at IUS, Johnston would go to a small cornfield with a classmate on sunny days when she would have time between classes. They would then sit outside and translate the passages, history books, plays and poems that they were assigned in class.

“We would translate them while laying by the dense cornfields under the sun, then note what we couldn’t find a translation for or whatever questions the writing would bring up to talk about with our class when going over the material,” she said. “Very classic college discussion style. When combined with such interesting professors and classmates, there were plenty of satisfying and revealing conversations inspired by the material.”

How Spanish Can Benefit Students

Aspen Kirchgessner, another one of Badia’s former students, mentioned how knowing Spanish and being bilingual has personally benefited her in her career.

“Knowing Spanish has been a big benefit when it’s come to the jobs I’ve had,” she said. “For example, I’ve been able to help translate on the job.”

Johnston also mentioned how translating can play a big part in a successful career involving the Spanish language.

“Translating jobs are definitely available and well-paying if you’re interested in making a career with your language degree,” she said.

Badia agreed with her former students, mentioning that she has had students get into law school, go into the tourism industry, become teachers and own interpreting and translating businesses because they knew Spanish.

“Employers like people who can speak another language and who know about another culture,” she said. “And the demographics in our region are changing. We’re getting a lot of people who speak Spanish and so if you have some experience with the language, you’re able to talk to them, sell things to them, help them with all of those kinds of things that you might do in the profession that you choose.”

Students who major in Spanish or take Spanish courses have multiple opportunities around campus to become more involved with the language, including an honor society, a Spanish club and local Spanish-speaking environments to immerse themselves in.

“That’s really just about the best way to gain an appreciation of the culture and fluency,” Badia said.

In addition to all of the opportunities locally and on campus, Spanish majors also have the opportunity to study abroad through a program involved with the major itself.

“Our majors actually participate in an international engagement experience where they either go abroad, or, if that’s not feasible for them, they work with the Spanish speaking population locally,” she said. “Those are the kinds of things that really help develop proficiency and the kind of proficiency that would be particularly useful on the job.”

For example, some of Badia’s former students, like Kirchgessner and Johnston, had the chance to study abroad in places like Costa Rica and Peru.

“I’ve been able to make friends from all over the world,” she said. “In Costa Rica, I was able to make new friends. I’m still friends with them all these years later.”

When Johnston studied in Peru, she had the chance to put her Spanish skills to the test. She went on a three-day hike in Colca Canyon. Her travel group ended up being five people total, only one of whom spoke English and absolutely no Spanish. The other three spoke Spanish and no English.

“So, for the next three days, the practice I had speaking Spanish basically kept everyone safe and together throughout the hikes,” she said. 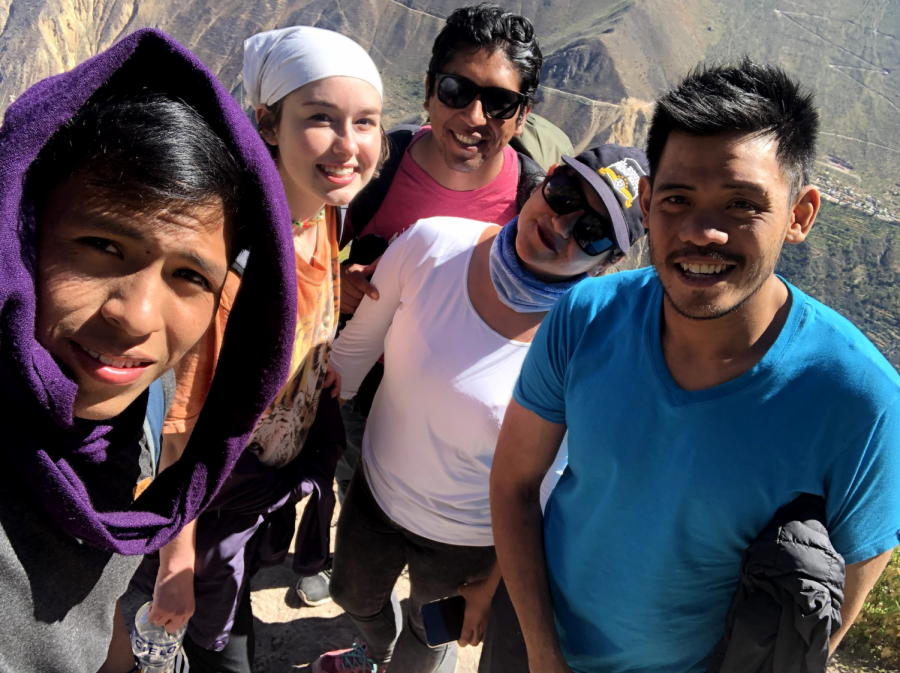 Badia said she thinks that students should care about taking a foreign language at IUS because it has positive effects on intangible things like brain development and cognitive skills. However, the language can also be a great complement to a degree.

“You think faster on your feet after studying a foreign language and you’re able to synthesize information more quickly,” she said. “And you’re more open minded. You don’t assume that everyone sees things the way you do, because you’ve been exposed to other perspectives and other ways of seeing the world. And that just makes for a kind of intellectual agility.”

Learning Spanish does not have to be drilling verbs and studying vocabulary every second of every single day. It can be fun, too. Badia and Kirchgessner both mentioned how movies, television, music and Netflix can be extremely helpful when learning the language.

“It’s amazing what you can pick up kind of painlessly like, listening to music and reading is a great way to build your vocabulary,” Badia said. “And also, movies and television. Netflix is great for that.”

Kirchgessner’s answer came in the form of some handy advice for incoming students.

“Be sure to listen to music and watch TV shows in the language you’ll be studying,” Kirchgessner said. “That way you’re already used to hearing some of the vocabulary you’ll be learning in class.”

Kirchgessner also had the chance to become immersed in the Spanish language through film.

“Professor Badia’s film class exposed me to some amazing films by Pedro Almodovar,” she said. They were moving and thought-provoking. Fun fact, I was even able to get an autograph from Mr. Almodovar for her.”

Lastly, Badia mentioned how students will know when Spanish has become a key part of their life.

“You’ll start dreaming in Spanish, right? Or things will occur to you in Spanish before they occur to you in English,” she said. “And then you know, okay, this is becoming a permanent fixture of my brain. Being in that environment is key. It really is.”

She also had one final piece of advice for students both new and old aiming to become fluent in the language.

“My students, if they work hard and if they practice, they can get there,” Badia said. “So that’s pretty cool.”