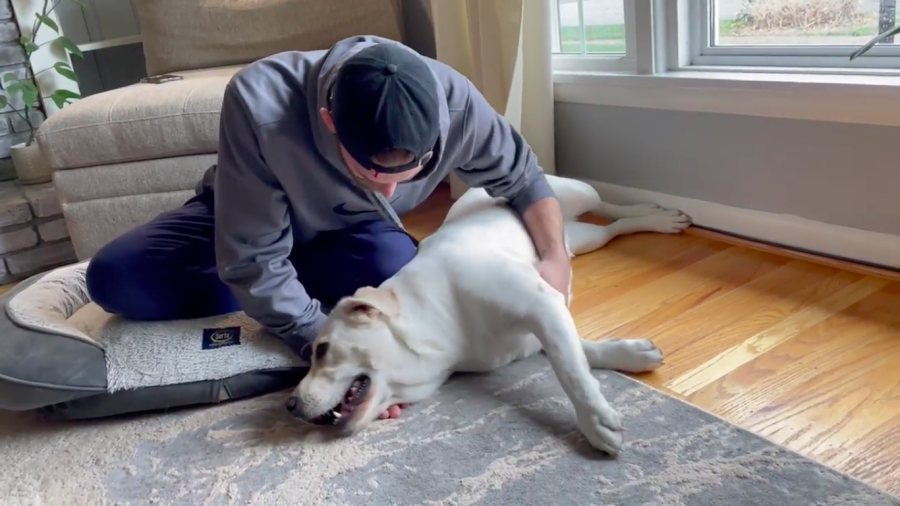 Imagine being a puppy confined in a shelter. You’re isolated, watching humans come and go.

One of them coaxes yet another whimpering dog into a nearby kennel. The two of you are part of a growing crowd of animals awaiting forever homes.

Countless animals were holed up indoors beginning in March 2020—just as humans were. But some people also brought pets into their lives and homes in subsequent months and years as the COVID-19 pandemic dragged on. Whether these animal lovers were adopting for the first time or not, these moves brought much needed relief and joy to Americans everywhere—including Kentuckiana.

As an IU Southeast undergraduate in early 2020, Condra found himself “very alone and in need of a friend,” he said. Just a few weeks into Zoom school, he was already spending too much time at home, cut off from classmates and almost everyone else he knew. By May, Condra decided to take control of the situation by adopting a new pal: Lilo, a Labrador, Doberman and pit bull mix.

“They were giving away dogs for free,” he said about his experience at Louisville Metro Animal Services. “When I heard that, I jumped at the opportunity to get my first dog. The shelter had been getting an increased amount of strays. So many of the dogs were very malnourished.”

It wasn’t long after entering Condra’s life and kitchen that Lilo gained weight and flourished. Lilo also went from being a disobedient puppy to “the sweetest, politest dog around,” Condra said. Meanwhile, he fed off of caring for Lilo, having gained a new best friend and confidant.

When Condra transferred to IU Bloomington, Lilo accompanied him.

He doesn’t elaborate on how badly his emotional wellness plummeted in 2020, but Louisville native Paige Hasson does.

Before New York shut down in March 2020, Hasson’s fast-paced life consisted of waiting tables in Manhattan during the day and working as a stand-up comic at night. Once lockdown began, it didn’t take long for her to go stir crazy.

“I was so depressed and so torn up,” she said.

The emotional highs and lows that came with trying to make it as a comedian quickly descended into despair. Had this virus permanently squashed her artistic dreams? Was her moving over 700 miles away from Kentucky a waste?

She wasn’t the only one who believed this at first. Americans everywhere stood in long lines for substances to numb their growing boredom and loneliness.

Fortunately for Hasson, she eventually retreated home to Louisville, where she reduced her drinking, saved money, regained physical health and began addressing her mental health.

Along the way, she adopted a black Labrador and dachshund mix in early 2021—a few months before mass vaccinations against COVID were rolled out—and happily spent her afternoons watching dog videos with her pup, Goose.

“I would’ve gotten to a very dark place if it hadn’t been for Goose,” she said. “During the pandemic, I was forced to sit with myself and my choices. It led me to not only take care of myself but to realize what I wanted and even needed.”

Many of Hasson’s friends and relatives questioned the wisdom of animal adoption because the 25-year-old had been constantly on the move before the monumental public health crisis. But dog ownership taught Hasson a lot.

“Advocating for him, whether in the vet’s office, at the park, or to my family’s long list of woes,” she joked, “I learned I was also advocating for myself, something I’ve always struggled with.”

Today, she feels more capable of speaking up about what she really wants out of life. She has moved back to New York, where her dreams of a career in comedy are no longer on pause. She joined “Saturday Night Live” as a production assistant and on weekdays, she is an admissions officer at Columbia University.

She can’t imagine life without Goose.

“Every day is a new adventure with this dog, and I wouldn’t change a second. If he’s happy, I’m happy.”

Not everyone who has adopted an animal since 2020 slid into despair the way Hasson and others around the country did.

She adopted her puppy just one day before the United States went into lockdown. The subsequent months were filled with surprising joy and humor – starting with the fact that the tiny pooch enjoyed snoozing inside a jacket pocket.

The dog “didn’t allow me to sit in sadness,” said Sorrell.

Other adoptions have turned bittersweet, however, with pet owners making heartbreaking decisions they never believed plausible.

Louisville resident Alayna Grossman was one of them.

She adopted 6-month-old Verbena, a mixed-breed dog, as a companion to her dog, Lilou, in March 2020. She lost her previous dog, Sherlock, two days before her October 2019 wedding.

“We had planned for Sherlock to walk down the aisle alongside us,” Grossman recalled. “We knew he was sick, but it was not expected that he would have a heart attack.”

She and her husband fell in love with Verbena, but the puppy was terrified of the outdoors.

“Her anxiety was unmatched,” Grossman said. “It was pure fear. She would make herself sick with her fear. She would throw up due to her fear and the shaking. She warmed up to Tyler and me, but the smallest sound would trigger an episode.”

A veterinarian prescribed medications that were supposed to relax Verbena.

Instead, the situation deteriorated.

“She would not even go on a walk,” Grossman said. “Her ears would turn back, she would completely shut down, laying on the ground, shaking. When she was not on the leash, she would huddle in a corner of our fenced backyard and shake. Once she would come back inside, she would throw up due to the shaking, and poop and pee in the house.”

The puppy simply refused to relieve herself outside.

The vet referred the family to a licensed behaviorist to try to stop the pooping and peeing indoors. This cost $6,000 – not including anti-anxiety medications. Despite all this intervention, Verbena kept having accidents indoors. Grossman and her husband constantly argued over what to do next, which compounded Verbena’s stress.

Once mass vaccinations against COVID began in 2021, she entertained the idea of having people over again. But Verbena’s anxiety and the growing, rancid stench of dog waste hanging in the air made it impossible.

For an entire year, Grossman’s family struggled and failed to reach a solution.

After another series of hard conversations with her husband, Grossman tearfully surrendered Verbena.

“Shelters were built for this purpose,” she said, adding that too many Americans are shamed for surrendering their animals.

“The situation with Verbena was hurting all aspects of my life: My mental health was suffering. My relationship with my spouse was strained. Lilou was not getting the attention she deserved. Our finances were becoming difficult. We were stressed out all the time, and feeling trapped.”

But for every heart-wrenching ordeal such as Grossman’s, there are many more outcomes like those of IUS alumna Natalie Cornwell, who along with her fiance adopted Hazel, a pit bull.

With reduced work hours during the pandemic, Cornwell had time on her hands and adopted directly through a friend. At first, Hazel was timid and scared. Like Verbena did in the Grossman home, Hazel sported her share of puppy disobedience by defecating all over the house. But rigorous training curbed the problem, and Hazel’s loving spirit multiplied the couple’s optimism.

Meet Louisville resident Karis Noble, who has fostered hounds from the Kentucky Humane Society since 2020.

She and her husband have fostered over 20 dogs, which makes her believe they have made a great impact on the community.

“Fostering allows me to have all the dogs without the responsibility of ownership,” Noble said. “Dogs love you unconditionally, and I want all the unconditional love I can get.”

From all of her experiences with fostering, she believes “dogs can be in foster for a variety of reasons including shelter overcrowding, puppies that aren’t old enough to be adopted yet [and] medical recovery.”

Noble encourages people to foster because shelters and rescue leagues are always in need of help, such as the Kentucky Humane Society. The more people who foster animals, the more room there will be in shelters for more animals.

“Fostering is a way of expanding the shelter’s walls.”

Volunteers have been necessary not just throughout the nationwide medical emergency, but continue to be gentle hands in giving animals a chance at a new life.

A prime example of this occurred during the July 4, 2022 holiday weekend. Dog lovers stepped up to adopt and foster dogs from the Louisville Metro Animal Services in response to a well-publicized plea to do so in order for the shelter to avoid euthanizing animals to make space. The facility waived adoption fees. Spay and neuter services were provided free of charge.

Shelter capacity has become a problem around the country, according to news reports, as workplaces have reopened. People have returned to offices, leaving less time to foster and more animals staying longer at the shelters. Philanthropy to the shelters waned in 2020, meaning new kennels were rarely built.

One local place that is always seeking volunteers to foster is the Kentucky Humane Society. Noble said that they are willing to work with volunteers’ schedules to figure out the best fit.

For those interested in learning more about the Kentucky Humane Society’s fostering system, click the link here.